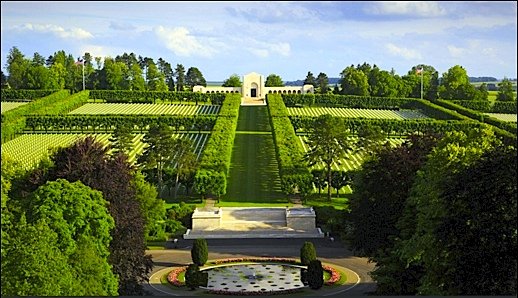 Ervin Sheffer is among the 24 WWI York County Veterans buried in Meuse-Argonne American Cemetery in France (complete list at end of post). Corporal Sheffer was the recipient of the Distinguished Service Cross for his heroic actions in the taking of Hill 253 during the Meuse-Argonne region offensive, occurring the last 6-weeks of the Great War.

Ervin O. Sheffer was born in York County, to Frank & Lillian Sheffer, during 1897. His parents lived in North Codorus Township, prior to moving to York City; where they resided at 1309 West King Street. In 1912, Ervin’s father died, after which Lillian married Oliver Deckman. Ervin took up the trade of chain making and was employed by the American Chain Company.

Ervin Sheffer enlisted in the Army on November 15, 1917 and received his training at Columbus Barracks in Ohio. On one of Ervin’s early military records, the typed “O,” for his middle initial, has a slight break on the right side; possibly from a worn typewriter ribbon. That is most likely why one occasionally sees Ervin listed as “Ervin C. Sheffer in subsequent war publications.

Ervin was sent overseas on March 30, 1918 and fought in many battles; including the Marne, Jaulgonne, the Vesle, St. Mihiel Drive and the Argonne Forest. Ervin was promoted to Corporal on September 2, 1918; prior to the battle at Argonne.

Corporal Ervin O. Sheffer had served nearly 6-months in battle, when killed in action on October 9, 1918, in France. During June of 1920, Mrs. Lillian Deckman, 1309 West King Street, was presented the Distinguished Service Cross in recognition of the heroic death of her son Corporal Ervin O. Sheffer in France. It was tendered by Lt. O. C. Jacobs, representing the U. S. War Department and was accompanied by the following citation:

“The Distinguished Service Cross is presented to Ervin O. Sheffer, (deceased), Corporal, U.S. Army, for extraordinary heroism in action while serving with Company I, 38th Infantry Regiment, 3rd Division, A.E.F., north of Cierges, France, October 9, 1918. In the attack on Hill 253, Corporal Sheffer was in command of an automatic rifle squad, which was making an attack under enemy rifle and machine-gun fire on an enemy machine-gun nest. After the gunner had been killed, he seized the automatic rifle of the dead gunner and while rushing forward toward the nest was killed by machine-gun fire.”

High on Hill 253 was a powerful German strong point that dominated a large part of the zone of advance of the 3rd Division. The German machine-gun nests on that hill had to be taken out for the division to advance, since the machine-gun nests held a field of fire over the entire valley.

Hill 253 was attacked on October 4th without success and again on October 5th when a foothold was gained on its southern slopes. The photo shows a German machine-gun nest, after it was taken on October 9th by the 3rd Division after a bitter struggle.

Hill 253 was a little more than 1-mile north of Cierges, France. The body of Ervin Sheffer was likely buried in the pictured cemetery, or another of the numerous small temporary battlefield cemeteries scattered across France.

By the Armistice of November 11, 1918, there were over 76,000 United States soldiers buried in temporary battlefield graves. No remains of fallen WWI soldiers were returned to America until well after the war ended.

Nationwide, beginning in 1921, the remains of roughly 60% of the fallen WWI soldiers were returned to the United States. The number was higher in York County, with the remains of 78% of the fallen soldiers returned to this country for burial near their hometowns. Lillian was in the minority in deciding to have her son buried in France with his fallen comrades. The following is the grave marker of Ervin O. Sheffer, in Meuse-Argonne American Cemetery in France:

Meuse-Argonne American Cemetery in France is the burial location of 14,246 American WWI Veterans. This hallowed ground, in Northeast France, is the largest veterans cemetery outside the United States.

This will be my fourth year presenting as part of The York Daily Record’s annual local history night. The theme this year is York County Illustrated and it will be held at a new venue this year: The Belmont Theatre, 27 South Belmont Street; at 7 PM on Wednesday November 28th, 2018.

Tickets are $10 for general admission and $5 for students and are available for purchase at tickets.ydr.com. We expect a sellout, so please act soon.