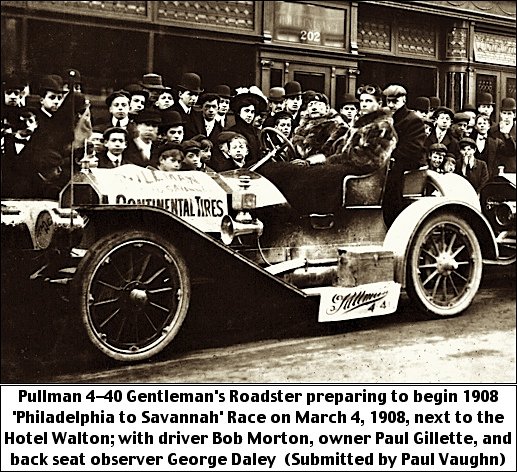 A York-built Pullman 4-40 Gentleman’s Roadster raced a Studebaker in an auto race lasting over two-weeks in March of 1908 from Philadelphia to Savannah, Georgia. This photo, submitted by Paul Vaughn, shows the Pullman at the starting point; outside the Quaker City Motor Club, located in the Hotel Walton in Philadelphia. Continue reading for more on that race, following a little background.

Click on this LINK for a yorkblog.com Full View of the original three photos in this post if details are cut off in the cropping of the photos, or if any have been removed from the ydr.com site.

The Philadelphia to Savannah race transpired largely due to the early success of an ambitious 24-week long auto race already underway. Newspaper readership was up. Readers flocked to the ongoing adventures involving lengthy cross-country auto races.

In 1908 an automobile race was held; epic even to this day. Cars raced from New York City, traveling westward, to Paris, France; covering almost 22,000-miles. The race was the brainchild of two newspapers; the French newspaper Le Matin and the New York Times.

Six automobiles from four countries started the race from Times Square on February 12, 1908. The grueling race contended with mud, ice, snow and many times no roads at all. The only American entry, a Thomas Flyer, is shown in the following Library of Congress photo; as it passes through Cheyenne, Wyoming. It took 6-weeks, for the leading Thomas Flyer, to reach the west coast. The idea of the race organizers was to travel to Alaska and hope the Bering Strait was frozen for the cars to drive across it to Russia. All along the teams insisted that was impractical, but those were the rules set forth and the teams did their best to stick to them. 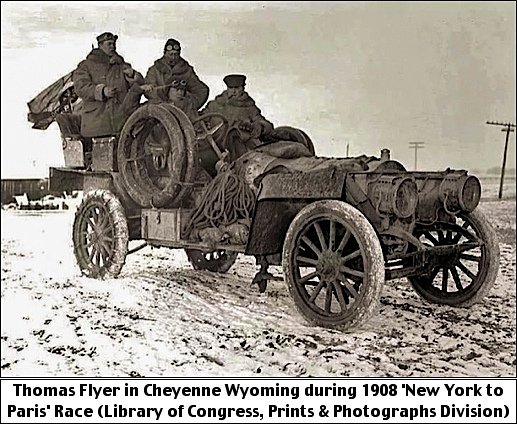 As the Thomas Flyer reached Alaska on April 8th, the Parisian race committee finally came to their senses and abandoned the Bearing Strait plan; instead they allowed cars to be shipped across the Pacific Ocean from Seattle to Vladivostok, Russia. This decision temporarily deprived the Thomas Flyer of its race lead, because they had to backtrack a greatest distance, whereas the other cars were much closer to Seattle.

Once each car arrived on Russian soil, the race got even tougher; traveling across the Siberian expanse to Europe was exceedingly harsh. Ultimately, it was the Thomas Flyer arriving in Paris on July 30th to win the race. Throughout the 24-week race, ongoing interest by the public increased newspaper circulation; just as Le Matin and the New York Times had planned.

Several weeks into the New York to Paris race, The Philadelphia Inquirer suggested a race from Philadelphia to Savannah where the new Savannah road-racing track was scheduled to open later in March. The Inquirer asked A. J. King, the local branch manager for Studebaker to issue a challenge.

It did not take long for Paul F. Gillette, of Newark, New Jersey, and agent for Pullman to accept the challenge. Earlier newspaper articles suggest bad blood existed between these automakers. The dispute started when Studebaker achieved a perfect score in an automotive competition. Several competitors, and most vocally Pullman, convinced the judges that Studebaker did not deserve a perfect score. The competition was redone under greater scrutiny by the judges; resulting in Studebaker no longer having a perfect score, however Pullman maintained their perfect score. Shortly after that incident, Studebaker did not respond when Pullman issued a match race challenge specifically to Studebaker. Evidently The Philadelphia Inquirer knew of this rivalry and thus approached A. J. King first; thinking a Pullman versus Studebaker match race would add to the race drama.

The Philadelphia Inquirer issue of March 5, 1908, contained the following photo of the Pullman and Studebaker Cars prior to the start of the race at 8:30 A.M. on Wednesday March 4th. Quoting the first two paragraphs of the accompanying article:

“The Pullman roadster and the Studebaker touring car started yesterday in the race to Savannah. The start was made from the headquarters of the Quaker City Motor Club, at the Hotel Walton, at 8:30 o’clock.”

“The Pullman was driven by R. L. [Bob] Morton, while Frank Yerger sat at the wheel of the Studebaker. With Morton rode P. F. [Paul] Gillette, of Newark, N. J., owner of the car, and G. W. [George] Daley, their observer. Accompanying Yerger were his brother Robert and J. W. Boyd. The latter will officially record the movements of the car.” 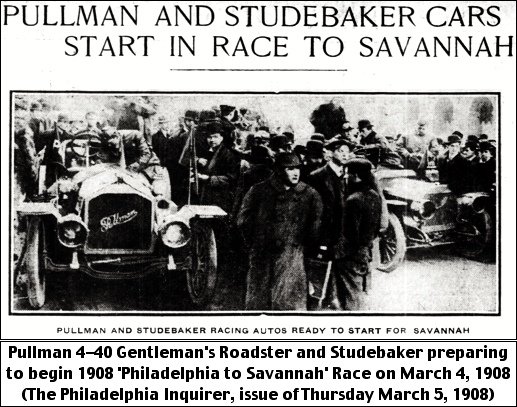 The day before the race, rules and route of the race were still being modified and were not finalized until the evening prior to the start of the race; run under the auspices of the Quaker City Motor Club. The official race route between Philadelphia and Portsmouth, Virginia follows: Philadelphia to Downingtown, Coatesville, Lancaster, Columbia, York, Abbottstown, Gettysburg, Frederick Md., Rockville, Washington D.C., Alexandria Va., Centerville, Fredericksburg, Richmond, Manchester, Petersburg, Suffolk and Portsmouth; with a total mileage being 426 miles to that point.

As the race started, the Richmond Automobile Club was still selecting the remaining part of the race route, from Virginia to Georgia. The racing cars would receive the final southern route upon their arrival at the Virginia capital. An overall race distance of 1,100-miles was anticipated.