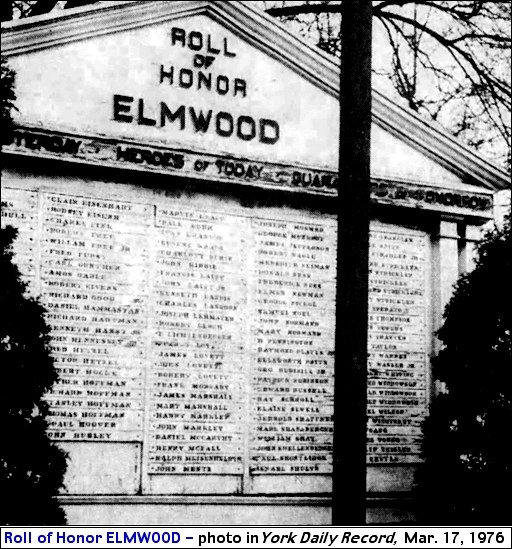 This Roll of Honor stood at the East Market Street entrance to Elmwood Boulevard in Spring Garden Township. A World War I veteran constructed the Roll of Honor following WWII to honor Elmwood residents who served in World War II.

The theme of this honor roll, “Children of Yesterday, Heroes of Today, Guarantors of Tomorrow” is spelled out above the lists of veterans. This photo appeared in the March 17, 1976, issue of the York Daily Record. Click on this LINK for a yorkblog.com Full View of the original photo in this post if details are cut off in the cropping of photo, or if it has been removed from the ydr.com site.

The photo was in the newspaper because Harold N. Reihart got the idea for a “Make America Better” Bicentennial project; after seeing the weathered condition of the Elmwood Roll of Honor. Reihart, the Chairman of the York County Board of Realtors, had realtors check, all around York County, on the condition of these monuments honoring veterans. The realtors discovered many were in need of repairs and attempted to find organizations or persons who would accept responsibility for assuming maintenance.

The Laity family business was woodworking. John’s father Samuel Laity started the business in 1919 as the York Pedestal Company. They operated for many years at 350 South Albemarle Street and specialized in church furniture. John Laity changed the business name to Laity Manufacturing Company, as his sons got involved and the business moved to Hallam.

After the Laity’s moved to Hallam, an Elmwood neighborhood grocer, Harry Kugle of First Avenue accepted the responsibility of maintenance for the Elmwood Honor Roll. No one stepped forward to do the maintenance after Harry died, which resulted in the condition shown in the 1976 photo.

I noticed in Joan Concilio’s recent post, that reader John Allen stated the Victory Fire Company No. 2 at Sixth Avenue and Wheaton Street in Spring Garden Township was given permission and moved the Elmwood Honor Roll to their engine house and social hall.