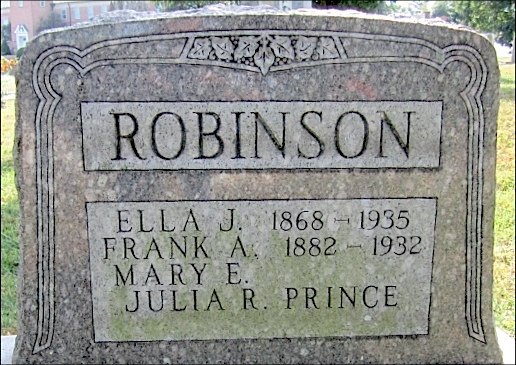 Ella Robinson trailblazer for a family of Teachers

Ella Robinson was a trailblazing black teacher in York City schools following her 1886 graduation from York High. In both respects, several of her sisters followed in her footsteps.

One of my school talks includes a few comments about the early history of York High, in which I note: one of the young women, within the Class of 1886, is the first black to graduate from York High School. Ella J. Robinson immediately became a teacher after graduating from high school; her career spanning 48 years of teaching within York City schools.

The Class of 1886 included 5-male and 10-female graduates. The commencement exercises were held in the York Opera House. This was a typical graduating class in the second decade of the existence of York High; in both number of graduates and always with many more female graduates versus male graduates.

Earlier this year I presented a school history talk; from which the 1886 example inspired Clara Williams to do some of her own explorations. Clara found a listing on page 34 of the 1898 York Directory intriguing and submitted four questions.

The Annual Reports for public schools of York, PA provided the answer for question (2). Ella Robinson is promoted to Principal on February 15, 1897. Besides being the administrator of Smallwood School, she taught grades 5, 6, 7 and 8. Daisy Butler taught grades 3 and 4. Mabel Robinson taught grades 1 and 2.

The answer to question (1) is no. Ella and Mabel are not sisters. However in the search for that answer, it was discovered two younger sisters of Ella are York High graduates, with both pursuing the teaching profession.

Ella’s sister, Helen Robinson, is a 1911 York High graduate. Helen attended Howard University in Washington, D.C., with the intent of going into the teaching profession. Unfortunately half way through her course of studies, Helen passed away following a surgical procedure.

The whole William and Eliza Robinson family are memorialized on two gravestones within Lebanon Cemetery in North York. The following gravestone, for William, Eliza and five of their children, is in the center island, between the entrance drives, just off of North George Street:

The four other children of William and Eliza appear on a gravestone, to the left side of the drive, a little further uphill from the first gravestone:

On a related note, the article “After Civil War, Veterans Organize in York County; Black Veterans and the David E. Small Post, No. 369, G.A.R.;” was published by the York County History Center in the 2015 Journal of York County Heritage; pages 14-33. The article contains an account of Memorial Day services held at Lebanon Cemetery; and information on many of the veterans buried there. One of the charter members of this Black Veterans organization in York is buried in Arlington National Cemetery.

Links to those related posts include:

Links to posts of York’s only WWI Black Veteran killed in action: