The East York Bowling Center opened on the evening of Wednesday November 30, 1955, per this ad appearing in the November 29, 1955, issue of The Gazette and Daily. Most bowling centers are located in stand-along buildings, not so with these East York bowling lanes. 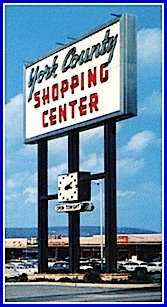 The East York Bowling Center was an integral part of the York County Shopping Center, which opened in the fall of 1955. For those new to the area, in the mid-1990s, this shopping center was redeveloped as the York Marketplace, along East Market Street in Springettsbury Township.

The 24-lanes of the bowling center were located under the stores in the northeast section of the York County Shopping Center. In terms of stores of today, the bowling center was located under stores in the vicinity of the Starbucks in the York Marketplace. The bowling lanes could be reached via an entrance and interior stairs from the upper concourse, or from a back entrance at ground level.

The ad points out the East York Bowling lanes are equipped with AMF Automatic Pinspotters. The fine print notes, “Come see the most revolutionary development in bowling—the pinspotter that eliminates the use of pinboys. Day and Night—The automatic pinspotter is always available to serve you.” AMF was the first company to mass-produce a fully automatic pinspotter; doing so in 1952. A unique York County connection is that production lines to make the AMF Automatic Pinspotters were established at the AMF factory in Springettsbury Township during 1969.

Before the introduction of automatic pinspotters, pinboys were employed to manually reset bowling pins to their correct position, clear fallen pins, and return bowling balls to players. Simple versions of automatic pinspotters were in use, going back to the early 1900s; however the few that existed were not reliable and were never used in bowling tournaments. Gottfried Schmidt, of Pearl River, New York, patented the first of several bowling pin setting machines in 1941. AMF purchased the rights to Schmidt’s patents and started work on production development of their pinspotter after WWII. 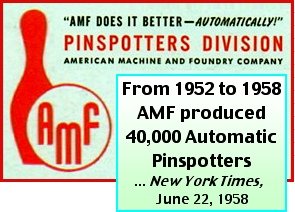 AMF set up a Pinspotters Division in Buffalo, New York. The first prototype pinspotters were behemoths that weighed 2,000 pounds; and they did not have consistency in operation. The evolving string of prototypes showed up in select bowling alleys around the Buffalo area; as refinements to the production design continued.

In 1952, the design was ready for mass-production. The AMF pinspotter design quickly gained wide acceptance and by 1958, AMF had produced 40,000 Automatic Pinspotters.

Production of AMF Automatic Pinspotters was added to the AMF York Plant in 1969. In 1971, part of my Engineering Course studies included “Inspection Trips” to industry.  The two plants that I visited in York County were Brunner Island Steam Electric Station and AMF York. The AMF engineer, taking us around the plant, worked on Pinspotter production. Seeing those machines being built make one appreciate the innovation that went into that design.

The York Plant of AMF produced 37,000 Automatic Pinspotters from 1970 through 1973. In March 1972, AMF Incorporated decided to establish their York Plant as the motorcycle production location of their recently acquired Harley-Davidson Motor Company. The first Harley rolled off the production line at that location in Springettsbury Township during February 1973; and they have been produced there ever since.

As an Engineer, working at York Division of Borg-Warner, I bowled on a few company Bowling Leagues. The Leagues were at Suburban Bowlerama on Queen Street Hill, however several of us, from the east end, regularly practiced at the East York Bowling Center. My best bowling success was during a practice session at the East York Bowling Center; when I bowled a 245. The first seven balls rolled were strikes, followed by a spare, another strike, and eight pins in the final frame.

The Bowling file at the York County Heritage Trust contained an article, from the March 4, 1990 issue of York Sunday News, about Bumper Bowling. The following photo is from that article; it shows the interior of the East York Bowling Center. Perky Savard, from the center, noted, “Little kids get so sad when all their balls go in the gutter. This way they never go in the gutter, and they always score; even if it’s only one pin.” 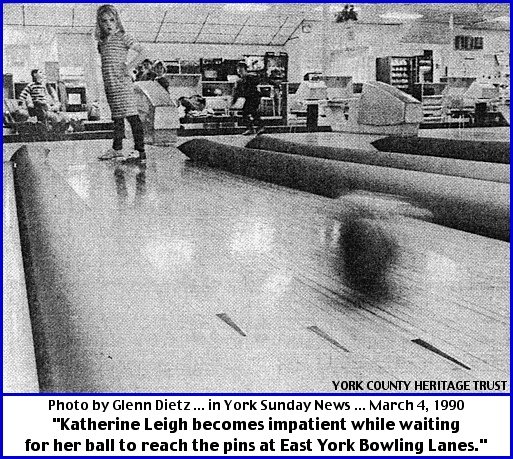 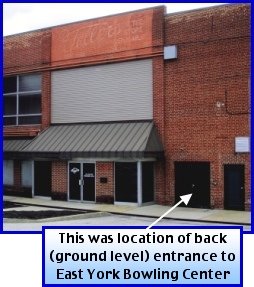 The location of the former ground level entrance to the East York Bowling Center can still be seen on the back side of the east-side stores; as pointed out in this 2013 photo.