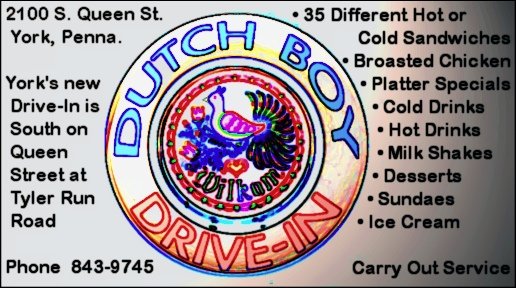 What are your memories of the Dutch Boy Drive-In along South Queen Street near I-83? That question was asked following one of my presentations last week. The query stumped me.

The questioner produced a small advertising card and allowed me to take a photo. Follow-up research revealed that Drive-In was in business from 1968 until 1972; which turned out to be the exact time frame I was away, getting an Engineering degree at Penn State.

The card gives the address “2100 South Queen Street” and notes “York’s new Drive-In is South on Queen Street at Tyler Run Road.” Prior to my talk, he looked through my YorksPast posts and since I often write about that stretch of South Queen Street, he pulled the Dutch Boy card to show me. His collection of such cards was gathered during his career traveling as a Manufacturers Representative.

From the card’s details, I knew the location was the southwest corner of South Queen Street and Tyler Run Road; i.e. the corner where Panera Bread is now located. He remembered eating at the Dutch Boy whenever traveling through the area and was disappointed when it closed. It stuck in his mind as the first place he ever ate Hog Maw, be it via prodding by a server to try it; and he did like it. Here is an ad for that Dutch Boy Drive-In platter special, appearing in the December 17, 1970 issue of the York Daily Record.

The Dutch Boy Drive-In was registered as a business name by Oscar F. Sharp in 1968. As the drive-in entered their second year of operation, it was open 24-hours a day, 6-days a week; closing only Sunday at Midnight. Here is the ad making that announcement, from the April 2, 1969 issue of The Gazette and Daily.

I did not locate any photos of the drive-in, however a Penn Pilot historic aerial photo exists during the time period when the Dutch Boy was in business. I’ve annotated the following August 11, 1971 aerial photo with the street names, while pointing to the Dutch-Boy Drive-In.

I thought the following Christmas ad for the Dutch Boy was interesting; announcing the drive-in would be open 4 PM to 10 PM on Christmas Day, plus free drinks and ice cream on December 24. The Dutch Boy also thanked customers for their patronage in the past years. The ad appeared in the December 24, 1970 issue of the York Daily Record.

What happened to the Dutch Boy Drive-In?

It appears the Dutch Boy Drive-In closed in early 1972, or possibly late 1971. An April 1972 ad for some equipment from the Dutch Boy Drive-In, notes “Must be sold, remodeling for Tavern.” Evidently the drive-in closed when a liquor license was obtained for that location; i.e. for the Tyler Inn.

That location opened as the Tyler Inn on November 21, 1972. The opening date is via a Tyler Inn ad in the York Daily Record on November 19, 1973; stating “Tyler Inn will be celebrating their 1st Anniversary, Tuesday, November 21st.

Links to posts about other Inns and Drive-In’s along South Queen Street: