Reading about something and wanting to know more triggers some subjects for my YorksPast posts; such is the case with this post.  I commented to Jim McClure’s York Town Square post on Friday, because I had something to offer; then I wanted to know more.

I thought I had something in my files.  When I found the 1972 note on recollections of a former Bendix employee, it resulted in a research trip to the Library of the York County Heritage Trust.  My findings resulted in a follow-up comment to Jim McClure’s post, plus enough left over for this post on Dusman Airstrip and the arrival of the 1952 Bendix Plant at Stony Brook.

The 1964 aerial photo extends over parts of Springettsbury and Hellam Townships; the dashed yellow line is the boundary line between these townships.  In the upper right, I’ve circled the location of Dusman Airstrip; it was located just west of Hallam, just north of the Lincoln Highway in Hellam Township.

In the lower left, I’ve circled the location of the 1952 Bendix Plant; the current address for this facility is 3750 East Market Street, just south of the Lincoln Highway in Springettsbury Township.  This former Bendix, and then Fincor, plant is presently for sale; in case any manufacturer out there is looking for a nice 104,500 square foot facility on a 15-acre lot.

Most aviation people know that during World War II, Bendix made the majority of instrumentation used in military aircraft.  The Bendix Radio Division was formed in 1936, to produce radio transmitter and receivers for aircraft; however quickly branched out into all other types of aviation electronics.  During and after the war, Bendix also made radar equipment of all kinds.  Quoting from the Bendix Radio Foundation web site:

What became the Bendix York, Pennsylvania operation in 1952 had its start as an Engineering department of Bendix Radio in the late 1940’s or early 1950’s, the exact date is lost in history.  This group moved from Joppa Road [in Towson, Maryland] to a facility in Pimlico, MD, and then into a new plant in York, Pennsylvania in the fall of 1952.

The separate facility was required for at least two reasons; Bendix Radio needed more floor space and the US Government wanted a separate location because of the highly classified work to be done.

The following view of the east entrance into the Bendix Plant in Stony Brook is from the Bendix Radio Foundation web site.

An account of why Bendix selected the Stony Brook site emerged once I combining what Frank Wills’ told me with information on Dusman Airstrip, appearing on page 97 of “Profile of Aviation, York County, PA 1925-1998” by John Wolfe.  Dusman Airstrip began as a grass airstrip; it was built by crop duster Gil Dusman.

The Bendix Plant is located one-mile distance from the Dusman Airstrip.

Frank Wills told me that Bendix teamed up with another York defense contractor to pave the runway.  John Wolfe identified that defense contractor as Bowen-McLaughlin.  About the time Bendix moved into their York Plant, Dusman Airstrip featured a 2,700-foot-long macadam runway.  Frank told me this airport was one of the reasons that Bendix selected the Stony Brook site; a lot of back and forth to the Maryland plant made easy by a short flight from a nearby airstrip.

Dusman Airstrip was not limited to use by Bendix and Bowen-McLaughlin.  In 1953 Dentists’ Supply Company (now Dentsply) also constructed a hangar for their airplane.  Caterpillar Tractor Company airplanes used this airport a lot when their plants were being constructed and expanded in Springettsbury Township.

It makes one wonder, if the high-voltage power line had not been constructed over the extreme western end of the Dusman Airstrip in the late 1960s, might this airstrip have spurred faster industrial growth in the area.  After the high-voltage power line was constructed, Bendix remained the only user of Dusman Airstrip; be it on a less frequent basis.  Was this one of the reasons that Bendix closed the York Plant in 1971?

Although their primary products were target detection devices, many other items were manufactured at the York facility.  The Target Detection Device (TDD) is the most complex and the most costly part; it can range from tens of dollars in the case of a mortar shell to tens of thousands of dollars in the case of a complex missile.  The following York Plant product details are from the Bendix Radio Foundation web site.

Bendix designed and produced TDD’s from CW FM to pulsed modulation.  Most were microwave frequency devices.  The types of weapons ranged from 81-mm mortars to Re-entry vehicles.  The following is a list of most of the weapons programs; Sparrow I, Bird Dog, Little John, Honest John, LaCrosse, Talos, Air Target Fuze, Bomarc B, MMB-1, MMRBM, Redstone, Minuteman, Phoenix, Chaparral, Mauler, M 532 (mortar), Lance, and MK12 R/V (Re-entry vehicle).  Bendix was a major sub contractor for IBM and did state of the art (at that time) core memory systems for IBM in addition to many other components. 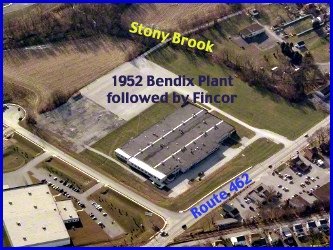 After Bendix ceased operations at the Stony Brook plant in 1971, Fincor moved in as the next manufacturer to utilize this facility.  Fincor did a nice business for many years, however suffered a downturn following the acquisition of the company by Emerson Electric Company of St. Louis.  They have since ceased operations and the 104,500 square-foot facility is for sale.  This current aerial view of the plant (with my notations added) is from a Reality Sales site advertising the plant for $995,000.