Tractor Seat Chairs made in York a Century ago 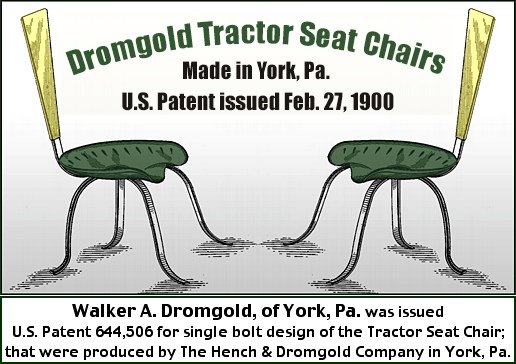 In honor of the opening of the 102nd Pennsylvania Farm Show this post examines Tractor Seat Chairs made in York over a Century ago. Walker A. Dromgold, of York, PA, received a United States Patent for the single bolt design of this chair, which provided a slight amount of spring in the legs and chair back.

I’ve colorized the illustration from United States Patent No. 644,506; which was issued on February 27, 1900. Click on this LINK for a Full View of the illustration in this post if details are cut off in the cropping of illustration.

The chairs were a novelty product of The Hench & Dromgold Company, which made agricultural implements in York, PA. S. Nevin Hench and Walker A. Dromgold were the owners. This company was the twelfth largest manufacturer in York County at the turn of the Twentieth Century.

The Hench & Dromgold Company was located at the northwest corner of North Hartley Street and the Railroad Tracks in York. They were one of the earliest factories in that part of town; eventually York Manufacturing Company became their southside neighbor and S. Morgan Smith Company became their northside neighbor. Click this link for a birds-eye-view and history of this company.

The main part, the seat, in the illustration was used in horse drawn agricultural implements produced by Hench & Dromgold, however this is the same basic seat design that later appeared in many early tractors. Walker A. Dromgold stated in this patent:

“This invention relates to improvements in chairs, and particularly to that class known as ‘park or lawn seats.’ The object of the invention is to produce a chair which will yield to the weight of the occupant. Furthermore, the object is to produce a chair composed of iron, in which the legs, seat, and back are clamped in place by a single bolt, which arrangement simplifies the construction and makes it comparatively inexpensive.”

Links to posts about a few other patented products made in York, PA: