Shelly Riedel submitted this photo of Dr. Spotz when he practiced in Hampton, Adams County, PA. Glatfelter Emanuel Spotz was a prominent York doctor whose medical practice began in Adams County during 1897, after graduating from Philadelphia’s Jefferson Medical College.

This photo can be dated circa 1900 because years ago, someone identified most of the individuals. G. Emanuel Spotz is driving the carriage and sitting beside him is his daughter, Marie McClure Spotz. Marie was born September 21, 1895, and looks to be about five years old in the photo. Marie is Shelly Riedel’s grandmother.

Initially I was going to title this post “Dr. Spotz on a house call,” however changed it when I discovered the photo shows his office and home in Hampton. It would be neat to see if this building still stands.

I’ll have a follow up post that notes Dr. Spotz was making house calls in Hampton via automobile in 1910. In the spring of 1912, Dr. Spotz returned to college; taking post-graduate courses at the Jefferson and Polyclinic Hospitals in Philadelphia. On March 21, 1913, his license was transferred to York County, whereupon he established a medical practice in York; see my previous post: Dr. Spotz used Race Car to make York County house calls.

Additional Photos and details about Hampton

Hampton is an unincorporated community 4-miles west of East Berlin in Reading Township, Adams County. Hampton grew at a crossroads on the Carlisle and Baltimore Turnpike, an old toll road that is now known as Route 94, the Carlisle Pike. If you’re driving west on US 30, the Lincoln Highway, and turn right at Cross Keys, onto Route 94, a little over four miles later, you’ll pass through Hampton. An arrow points to Hampton, in the upper left, on the following Adams County map section: 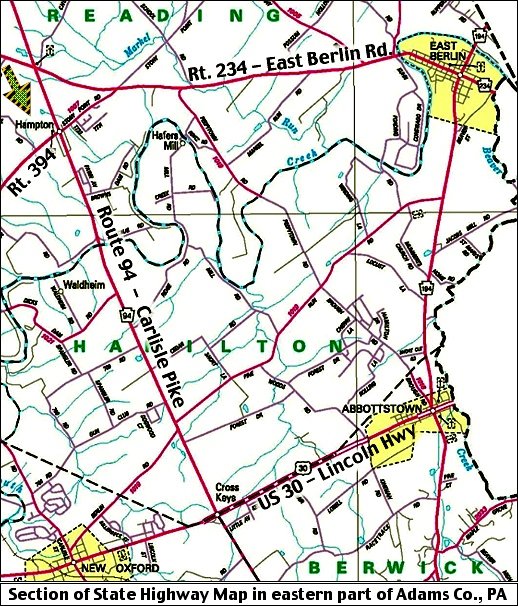 Here is the full photo submitted by Shelly Riedel. On the mounting board years ago, someone identified most of the individuals. The man on the porch is not identified and the four women at the bottom of the steps are way overexposed; leading one to believe the names were written by someone present when this photo was taken. These four women are: Dr. Spotz’s wife Helen, plus Florence, Francis and Pauline Neiman.

I noticed what looked like a plaque next to the front door. When I zoomed in on the plaque; it read “DOCTOR G. E. SPOTZ.”

Dr. Spotz was born in York New Salem and returned to live in York County and establish a medical practice in York during 1913. He initially resided at 202 Carlisle Avenue in the west end of York. Dr. G. Emanuel Spotz, purchased the house at 2025 East Market Street, in Springettsbury Township, when the York Motor Club decided to sell it in 1923. His son-in-law, Thomas Anderton Monk, Jr., resided with his wife, Marie McClure Spotz at 2025 after Dr. Spotz purchased the house and after the passing of G. Emanuel and his wife Helen McClure Spotz. The “Grande Dame of Market” remained in the family for 48-years.