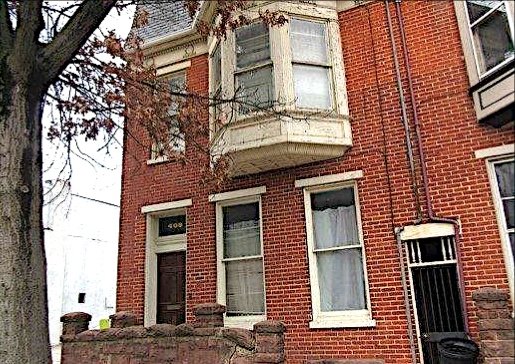 Rob Peters conducted family history interviews, via Zoom, over the holidays, when he learned his grandmother was operated on for a ruptured appendix at a small hospital, located on Doctors Row in York. He had never heard of such a hospital in the 400 block of West Market Street and wondered if it might have been the Polyclinic Hospital instead. In my search, it was discovered the building at 409 West Market Street was the site of Church View Sanitarium; containing an operating room primarily utilized by Dr. Samuel E. Ensminger from June of 1916 into the 1920s; where appendectomies were prevalent, per newspaper accounts.

A national directory of hospitals in the United States during 1926 was discovered on the Internet. Five hospitals were listed for York, Pennsylvania. From the most beds to the least: York Hospital, 125 beds; West Side Sanitarium, 42 beds; York County Almshouse Hospital, 28 beds; Polyclinic Hospital, 10 beds; and Church View Sanatorium, 6 beds.

The only hospital that I did no know the location was the Church View Sanitarium. In consulting the city directories on Ancestry.com, the 1917 Directory of York, PA contained the following listing: “Church View Sanitarium, Samuel H. Ensminger, Surgeon, Consultation hours week days 1 to 3 and 6 to 8 P M and by appointment, 409 W. Market. Tels York 275-M, Bell 374-M.”

This sanitarium took the name Church View because directly across the street, at 408 West Market, is Union Lutheran Church. Church View was established in June of 1916; five months before Polyclinic Hospital, which was established during November of 1916. An article in the New Oxford Item on August 31, 1916 reported, “Dr. H. W. Kohler, of Littlestown, is one of the staff surgeons of the Church View Sanitarium, York. Dr. Ensminger, of York, and Dr. Williams, of Mt. Wolf, are also interested in the institution.”

In 1914, it was Dr. Louis V. Williams, of Mt. Wolf and Dr. Horace W. Kohler of Littlestown, that initiated discussions to establish a Polyclinic Hospital, at a central location; where county doctors could operate in a shared first-rate facility. It looks like other doctors had a similar idea and thus Church View Sanitarium was established. Dr. Kohler latched onto that opportunity and Dr. Williams appeared ready to follow.

Evidently Dr. Williams and Dr. Kohler convinced Martha Kauffman to leave the Church View Sanitarium and become the Superintendent at the new Polyclinic Hospital. Dr. Ensminger continues to operate Church View Sanitarium with a few other surgeons, however by 1919, he is the primary surgeon and is owner/operator. By the time the York Hospital moves to the hillside south of York in 1930, it appears Dr. Ensminger has given up performing surgeries at 409 West Market street; at which point the building became his medical office and home.

The Polyclinic Hospital had a longer run; from 1916 until 1953. Dr. Louis V. Williams’ Polyclinic Hospital at 150 South Duke Street in York is sold during August of 1953. A photo from that time is shown on page 19 of the August 14, 1953 issue of The York Dispatch. Quoting the caption of that photo: “This two-and-one-half story, 14-room building at 150 South Duke street, purchased today for $19,000 from Dr. Louis V. Williams, will be the new headquarters of the Family Service Bureau, now located in the Welfare Building, 309 East Market street. Presently operated as a private hospital, the building will require interior renovation to provide the family-counseling agency with office space and private consultation quarters; expected to be completed in two months. Family Service, a Red Feather agency of Community Chest, hopes to expand its program to the entire county soon after its new headquarters is occupied. Home-contact service now is limited to families living within a 10-mile radius of York.”

Coinciding with the closing of the Polyclinic Hospital in York, The Lancaster New Era, in the August 12, 1953 issue, reported, “Dr. L. V. Williams, of York, has donated an operating table, instrument table and sterilizer” to the Columbia Hospital. The operating table was described as a “mayo operating table” in an earlier Polyclinic Hospital article. I did not comprehend that description until seeing the following article per a Church View Sanitarium search.

The York Gazette of August 30, 1916, reported: “A new operating table was received yesterday at the Church View Sanitarium, 409 West Market Street. The table is of the same type as the one used by the Mayo brothers, famous surgeons of Rochester, Minn.”