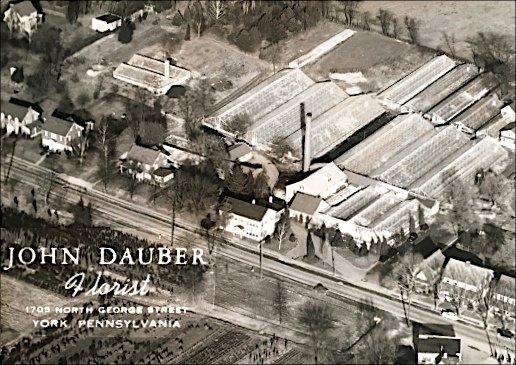 John Dauber Florist business in York County was not just a flower shop. For more than 70-years this family owned business operated from an array of large greenhouses to far-reaching plant nurseries; with ties to the Susquehanna Trail, Arsenal Road and ultimately Route 30. In the circa 1950s eastward looking postcard, North George Street runs diagonally across the aerial photo.

I’m often questioned how I choose the subjects I write about in YorksPast. For this post, it started with e-mail feedback, to my 2019 post about the florist businesses of Augustus H. Schaefer and Charles A. Schaefer; with readers asking about Dauber’s plant nursery. At that time, Dauber’s was added to my to-do-list containing hundreds of future post subjects.

As with most items on that list, follow-up queries, and/or a chance discovery, cause a subject to bubble to the top in that list. Dauber’s came up in questions following two of my after luncheon talks earlier this year. A recent e-mail from Nick Wetzler provided background history of his neighborhood, with is adjacent to where Dauber’s Greenhouses and Nurseries once stood. Days later, while researching in the Business Manuscript files at the York County History Center for a future talk, the postcard advertising the John Dauber Florist business was a chance discovery.

The following 1958 Sanborn Fire Insurance Map shows the neighborhood surrounding the Dauber Greenhouses (yellow) along the east side of the 1700 Block of North George St. in Manchester Township. Most of the greenhouses are between State Street and Harvard Street. North of Harvard Street, the grey greenhouses indicate a total reliance on electric lighting for plant growth in these hothouses. The brick (red) house along south side of Frelen Road is the same house seen in the extreme upper left corner of the postcard.

John W. Dauber, Sr. [1860-1935] is the founder of the business. He was born in Baltimore and came to York in 1888; initially finding work as a gardener. On April 30, 1891, he married Miss Mary A. Horwedel at St. Patrick’s Church in York. John soon established his own business of gardeners. In 1908 he purchased the first of his many parcels located in the 1700 block of North George Street, at which time their family included 5-sons and 2 daughters; with another daughter soon to follow.

In 1909, John Dauber purchased an adjacent parcel and in late 1910 he established the John Dauber Florist business. An additional adjacent property was purchased in 1913. The March 18, 1915 issue of The Florists’ Review (page 76), reported on this growing business: “York, Pa.—John Dauber has more than doubled his greenhouse capacity during the last year, now having about 22,000 feet of glass at the range on North George Street, and is considering making another big addition.”

The start of the large-scale Nursery part of the Dauber business began with additional land purchases in 1922, 1925 and 1931. These purchases resulted in John Dauber owning land on both sides of North George Street in Manchester Township, from 11th Avenue, northward; plus a large property southeast of, and partly in, Manchester Borough, extending into East Manchester Township.

The John Dauber business was known for developing new varieties of flowers. Some of their earliest successes were in new varieties of carnations. The Gazette & Daily of April 8, 1932 reported, “John Dauber, florist, North George Street, extended, has been awarded first prize for a new carnation, at the flower show being held this week by the Baltimore florists, at the armory. This flower, ‘Carnation Romance,’ was developed in the past few years by the Dauber hot houses. It is dark pink and of unusual size and fragrance. Last year the flower won first prizes at the New York and Philadelphia flower shows.”

The properties of the John Dauber business, north of 11th Avenue are pointed out on the following 1937 aerial photo. 11th Avenue is the boundary between North York, to the south the avenue; and Manchester Township, to the north of the avenue.

Decades later, in 1948, Arsenal Road would be built through the southeastern section of Dauber’s Nurseries; to align with the shifted entrance of the Susquehanna Trail. That occurred at the same time the single-lane automobile bridge was replaced with a two-lane bridge over the Codorus Creek.

The following 1983 aerial photo shows the same area as the 1937 aerial photo. Commercial development has taken over all of Dauber’s Nursery operations in that area. The 4-lane divided Route 30 passes through the area on paths established in 1924 for the Susquehanna Trail and in 1948 for Arsenal Road.

An article in the May 1st, 1981 issue of The York Dispatch noted the closing of the John Dauber Florist business. Members of the family said they decided to close the business and sell the land due to inflation, the rising cost of energy and increases in taxes. It was noted the closing of the flower shop and greenhouses, had no effect on Dauber’s Nurseries, still being operated by William J. Dauber at their property southeast of, and partly in, Manchester Borough, extending into East Manchester Township.

For several years the remaining greenhouses sat vacant, until they were demolished in 1987. The following York Dispatch photo (published January, 7, 1988, pg. 56), shows demolition complete on the Dauber Greenhouses, that stood at 1705 North George Street. The soon to be demolished smokestack was part of the system for heating the greenhouses. Some have surmised Dauber’s operated a clay flowerpot manufacturing operation; although this has not been confirmed. However the size of the smokestack does suggest it could have been used for a kiln; in addition to its use in conjunction with boilers for heating the greenhouses.

On the site of the former Dauber greenhouses, an AutoZone Auto Parts store is now located along North George Street and a Wingate hotel by Wyndham York, 105 State Street, is to the rear of the AutoZone store.

The Dauber Nurseries property southeast of, and partly in, Manchester Borough, extending into East Manchester Township encompassed about 90-acres. That operation shut down about 1983. Trees and shrubbery, which were planted all around York County for nearly half a Century, had their start in that nursery. That tract was later developed in the late 1980s as Dauberton. Names of the roads in Dauberton include: Poplar Street, Dogwood Lane, Boxwood Road, Oak Lane, Juniper Court, Cedar Street, Pine Drive, and Spruce Lane.