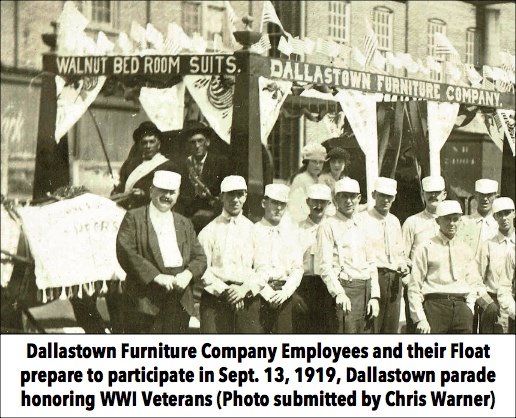 Chris Warner submitted a vintage Dallastown Furniture Company photo that had been saved by his grandmother Mildred Arline (Smith) Burk. The photo shows employees standing in front of a horse-drawn company float; parked next to the furniture factory. Those buildings still stand today; at the northeast corner of North Park Street and East Locust Street in Dallastown, PA.

Mildred A. (Smith) Burk was married to Luther A. Burk, and Chris learned that Luther’s brothers Amos S. Burk and Walter H. Burk worked at the furniture factory. Chris discovered my post about the Dallastown Furniture Company’s involvement as a WWI supplier and inquired if I could provide more information about the submitted photo; which follows.

On September 13, 1919, Dallastown held a parade honoring WWI Veterans from Dallastown and the surrounding area. These parades, honoring returning veterans, were held at various locations, throughout York County, during 1919. The parade in Dallastown had originally been scheduled August 15th, however it was rescheduled due to rain.

Several years ago, at the York County History Center Book Blast, I purchased an old book in which I eventually discovered a small, marked-up map between the pages. With no notations, other than recognizing it was Dallastown, I placed it in my miscellaneous historic maps folder. Reading the parade route brought back a memory of that map, which follows. It appears to nearly match the September 13, 1919, parade route description.

The float of the Dallastown Furniture Company was listed as accompanied by some of their employees on foot. The gentlemen in the white shirts and hats were the likely employees on foot, during the parade. I’ve broken those individuals into four groups.

Please send me an E-mail, if you can identify any of these men, or the men and women on the float.

Chris Warner suspects Amos S. Burk is the fourth from the left in the second GROUP.