On New Years Day in 1914 Dallastown held their initial Mummer’s Parade. During the day, the parade covered all the streets of the borough. In the evening, “King Dodo” and his Mummers band marched to a reception held in their honor.

The streets of Dallastown were not yet paved in 1914. Therefore on New Years Day in 1914, the Mummer’s marched on Main Street much as it appears in this photograph. The Flickr posting by the Dallastown Aera Historical Society is a scene looking east along the first block of East Main Street. Around Dallastown by Richard C. Saylor and Michael L. Sentz, Jr. contains this image on a postcard mailed in 1908; per page 20 of their Arcadia Publishing book in the Images of America series. Therefore the scene is from 1908 or earlier. The trolley tracks, seen running down the middle of Main Street, were installed in 1901.

The image shows buildings along the north side of East Main Street. The light stone fronted, tall building, a little right of center, is the First National Bank of Dallastown. That building is located at 45 East Main Street and was opened in 1904. The photo can therefore be dated between 1904 and 1908.

My memories of the First National Bank building are not so much of the bank, but the dental office on the second floor. From a young child in the 1950s and then into the late-1970s, Dr. John Rojahn was my dentist. The waiting room was right behind the large semi-circular window fronting East Main Street. Dr. Rojahn was an old-school dentist, hardly every using Novocain; one just learned to tolerate the pain as he drilled your teeth.

The Wednesday, December 31, 1913, issue of The York Daily included an article entitled, “MUMMER’S PARADE, Will Feature The New Year’s Celebration At Dallastown.” A photocopy of the article is included; after a complete transcription, for easier reading:

Dallastown, Dec. 30.—“King Dodo,” with his band of 30 musicians, will arrive here some time Thursday morning and at 1 p.m. on that day a street parade will be held by the band. The members will be in comical costume, in darktown style. The parade will cover all the streets of the borough and will be headed by “Uncle Sam.” After the parade the members will retire until 8 o’clock in the evening, when they will again form and march to the auditorium where a reception will be held in honor of “King Dodo” and his band. Uncle Sam will deliver the address of welcome. Mutt and Jeff will be included in the evening’s entertainment. This is a new feature for Dallastown on New Years’s day and considerable interest is being manifested. 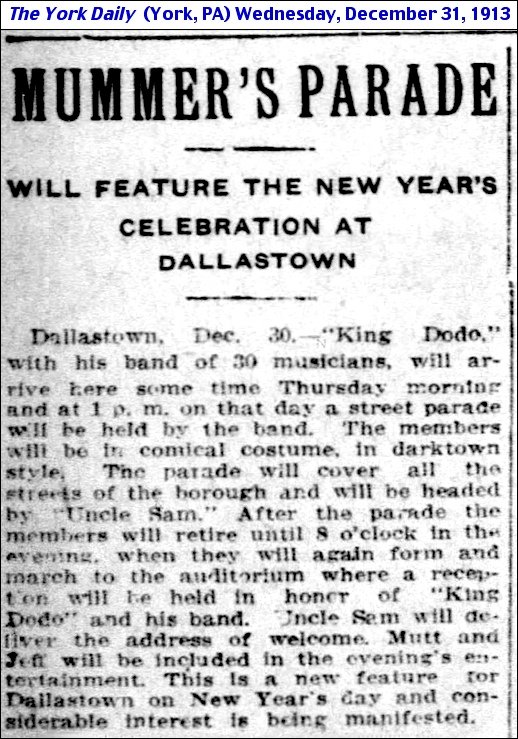 A follow up article about these festivities appeared in the Friday January 2, 1914, issue of The York Daily. The article was entitled, “DALLASTOWN MUMMERS, “King Dodo” and His Darktown Musicians Paraded the Streets;” quoting that whole article:

Dallastown, Jan. 1,—“King Dodo” and his band of darktown musicians headed by “Uncle Sam” paraded the streets of the borough this afternoon as a new feature for New Year’s day here. The event proved very interesting. Jacob Workinger took the part of “King Dodo,” and Chauncey Heisler appeared in the role of “Uncle Sam.” The band of musicians including the director, “King Dodo,” were clothed in blue coats and caps and white trousers. “Mutt” and “Jeff” were represented by Chauncey Heckert and Tibertus Grim. John Heisler took the part of a cannibal. Many others in spectacular costumes were included in the parade. This evening “King Dodo” and his band were given a reception in the auditorium, when “Uncle Sam” delivered the welcome address before a crowded house. Music and motion pictures were included in the evening’s program. It is likely that a similar observance of the day will be repeated next year.

The auditorium noted in the articles was located on the northwest corner of South Walnut and West Howard Streets in Dallastown. Built in 1906, that building primarily served as a 300-seat theater hall, showing silent films from 1906 to 1929.