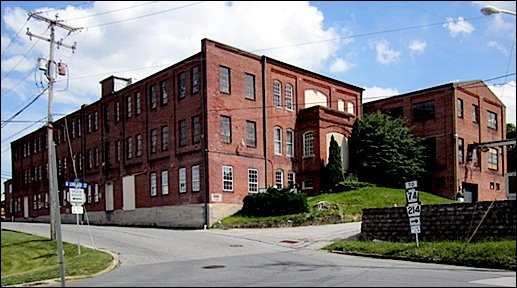 Recent queries about Merchants Box Company, in conjunction with a National Register application, caused me to look deeper into my Merchants investigation, started over 25-years ago; as part of Barshinger family research. That was when I first heard of the National Archives connection; upon hearing the literal opening sentence in this post.

When driving between Dallastown and Yoe, one passes the factory buildings that began as Merchants Cigar Box Company in 1900. They sit at the southeast intersection of Lombard and Broad Streets in Dallastown. Heading north on Lombard Street from that intersection, the road becomes Main Street as it passes through Yoe.

The following circa 1949 annotated aerial photo shows the factory buildings in a view looking eastward. As indicated, the Dallastown spur of the Maryland and Pennsylvania Railroad was located adjacent to the south side of the factory.

The central section of the buildings (shown with skylights in the aerial photo) is the original 1900 building. The additions to the railroad side were constructed in 1936, allowing the company to produce 100,000 cigar boxes per week; per The Gazette and Daily issue of June 30, 1936. Those 1936 additions are behind the long building, as viewed from the intersection of Lombard and Broad Streets:

A prior addition was constructed in 1925, between the original 1900 building and Broad Street; per The Gazette and Daily issue of June 11, 1925. The 1925 addition is shown on the right side of a July 1929 Sanborn Fire Insurance Map of Dallastown:

Keyworth & Company, architects at 23 East Market Street in York, designed the brick factory and bids for constructing were requested by April 30, 1900. The Gazette of September 28, 1900, notes the “factory is now completed and will be in operation about October 1.” The following is the earliest photo of Merchants Cigar Box Factory:

Harry R. Sprenkle [1876-1967] was the individual most responsible for the success of the company; he was affiliated with Merchants Box Company for 60 years. The former one-room school teacher, was hired as the company bookkeeper when the factory opened. By the fall of 1902, Mr. Sprenkle was promoted as general manager of the entire factory; a position he held for the next 45 years; until his retirement at the age of 71. In retirement, the Board of Directors named him to the Secretary-Treasurer post of the company; which he held until 1960.

During the early years, Merchants Cigar Box Company focused on the manufacture of cigar boxes and cases. However, they also were dealers in: lumber, laths, edging, trimming and other box makers’ supplies; per the following 1907 newspaper ad:

Starting in 1932, Merchants Cigar Box Company started to produce a variety of small custom person-use wooden boxes in addition to continuing cigar box production. The custom wooden boxes grew to be big part of their sales, such that, in 1939, the name of the company was officially changed to Merchants Box Company. The following makers imprints can be found on boxes made by the Merchants factory in Dallastown. The upper left imprint was utilized prior to 1939. The upper right is a stick on label and at the bottom is the imprint found on their more expensive decorative boxes.

Around 1959, Merchants Box Company of Dallastown was selected by M. S. Ginn and Company, Washington, D.C., to supply wooden index card boxes as a subcontractor for a contract Ginn had with the General Services Adminstartion. This arrangement lasted throughout the 1960s; resulting in about a quarter-million dollars of annual business for Merchants.

When I was told Dallastown’s Merchants Box Company made boatloads of distinctive wooden file boxes for the National Archives, there was also a comment that Congressman George Goodling was responsible for allowing Merchants to bid directly on the annual file box contract; cutting out the middle-man; i.e. M. S. Ginn and Company.

The first newspaper article with Merchants getting the contract directly appeared in The Gazette and Daily of September 29, 1970: “A contract for an indefinite quantity of wood index boxes has been awarded by the General Services Administration to Merchants Box Company, Dallastown, Sen. Hugh Scott (R-Pa.) announced yesterday. Scott said purchases are expected to reach $260,593. The contract is to run for a year from Nov. 1.” Thus this contract ran from November 1, 1970 to October 31, 1971. This following Merchants Box Company wooden index card file box, at one time for sale online, was manufactured in that time frame; “Jun 1971” is stamped with part number and manufacturer on the inside of the box top.

The last newspaper article discovered with Merchants getting this contract appeared in the York Daily Record of November 13, 1972: “The General Services Administration has awarded a contract to Merchants Box Co. of Dallastown in the approximate amount of $356,800 for an indefinite quantity of wood filing boxes. The contract will run from November 1, 1972 , to October 31, 1973, according to an announcement from Congressman George A. Goodling’s York office.”