I recently discovered a copy of the Sixth Annual Report of the Northern Central Railway Co. for the Year 1860. The Supervisor’s Report, dated January 1st, 1861, from the Road Department provides some interesting details about the railroad bridge then located at the site of Black Bridge. In 1860, the Howe Truss railroad bridge at the present Black Bridge site was Covered.

J. DeHaven, the Supervisor of the Road Department of the Northern Central Railway, also recommended, “the roofing of all truss bridges on the line.” A year later, The Seventh Annual Report of the Northern Central Railway Co. for the Year 1861 also included a full schedule of all the bridges. That report, for the year ending 1861, did not make a distinction between plain and ‘covered’ for the truss bridges; had all the truss bridges been covered and a distinction was no longer necessary?

Regardless, during 1860, The Sixth Annual Report, confirms the railroad bridge over the Codorus Creek, at the location now known as Black Bridge, was a Covered Railroad Bridge. Since it was covered, the original Howe Truss Bridge built in 1848 was definitely of primarily wooded construction and highly likely a through truss; i.e. the trusses beside the train, as opposed to the rails being built on top of the trusses.

The following photo shows a typical 2-span Howe Truss Bridge of the construction common in the mid-1800s. This photo is of a Howe Truss Railroad Bridge that was in Boone, Iowa, and is from the Iowa State Archives. The 2-span Codorus Bridge (now Black Bridge), built in 1848, probably appeared similar. 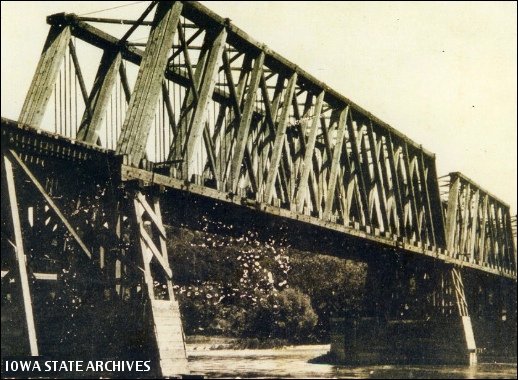 Sometime before January 1st, 1861, the 2-span Howe Truss Bridge over the Codorus Creek was covered. Continue reading to see how this was done, using an interior photo of a Covered Howe Truss Bridge that still stands.

The Library of Congress contains records of the National Covered Bridges Recording Project. In which, Clark’s Bridge, spanning the Pemigewasset River in Grafton County, New Hampshire, is noted as one of only two railroad Howe Truss Covered Bridges remaining in the country. Of greater significance, Clark’s Bridge is the only covered railroad bridge in the country, of all types, that still is in active use. Clark’s Bridge is on the White Mountain Central Railroad, which is utilized by Steam Tourist Trains.

Clark’s Bridge was originally built in 1904, near the end of the era of primarily wooden Howe Truss bridges. The following interior photo of this Howe Truss Covered Bridge is from the Library of Congress, Prints and Photographs Division. I’ve lettered various components of the bridge to describe them more fully.

Two dominant features separate a primarily wooden Howe Truss Bridge from other bridge trusses. These features are: heavy timber diagonals (A) slanting to the center of the bridge and vertical iron ties (B). Nevertheless, other components are required to complete the design. I’ve identified those by letters on this interior photo of Clark’s Howe Truss Covered Bridge and describe them as follows:

(A) Primary Compression Timbers utilize one standardized length, with square-cut ends. Since rot and fire were the two most dangerous threats to timber railroad bridge construction, the wood was usually treated with Bethell’s, Burnett’s or a similar process before the bridge was constructed.

(B) Iron Tension Rods are one standardized length and threaded at the ends.

(C) Counter Compression Timbers utilize one standardized length with square-cut ends. The cross sectional area of the counter only needs to be about 20% of the two massive primary timbers.

(D) Top Chord is composed of several sticks of wood bolted together and separated with oak keys. The sticks are as long as possible and square-cut splices at the ends of the sticks are staggered. Spaced apart by at least 1-inch is desired for ventilation; to prevent rot.

(E) Botttom Chord is like top chord except in the method of splicing the sticks, because the bottom chord is in tension. An interlocking splice must be used to allow transmitting the stress from one portion of a spliced stick to the neighboring spliced stick.

(F) Chord Blocks are iron castings that have angled seats to accept square-cut timber ends and have clearance holes; through which iron tension rods pass.

(G) Bolt Plates have clearance holes to accept threaded ends of iron tension rods; onto which nuts are fastened and torqued to hold the bridge together.

(H) Cross-Bracing between the top chords of the two side trusses.

(I) Rail Deck attached to the bottom chords of the two side trusses.

(J) Side Walls attach to (A) & (B) and leaving about one-foot opening at top.

(L) Roof sits on the top chords of the two side trusses.