Christmas Tree Hill at the Mansion is just south of the Galleria Mall; at 2840 Whiteford Road in Springettsbury Township. In the 1980s the Meadowbrook Inn and Tavern operated within that mansion.

I’ve shown the cover and a historical note contained within a circa 1986 Meadowbrook Tavern Menu. Quoting: “Of particular note are the six colossal columns on the front porch, which reportedly came from an early York County Courthouse.” A wide view of the mansion is followed by column top close-up photo.

Several years ago Jim Rudisill explained the details to me. The six columns on the front porch of Meadowbrook Mansion were repurposed from the cupola of the second York County Courthouse. That courthouse was constructed in 1841 and stood at 28 East Market Street until it was dismantled in 1898 so that the third York County Courthouse could be constructed on the same site. The third courthouse is now known as the York County Administration Center, at 28 East Market Street.

Prominent York businessman Edwin Myers purchased a farm property in Springettsbury Township during June of 1901 and immediately retained J. A. Dempwolf trained architects John B. Hamme & Edward Leber to upgrade the house on the property. On August 24, 1901, The York Daily reports construction is about to commence on the mansion:

“Mr. Edwin Myers has just contracted with C. A. Boyer, of East York, for the erection of a handsome country residence on his farm recently purchased from the Peter Lint estate. The house will have a frontage of eighty-two feet on the Vinegar Ferry Road and will be situated about two miles eastward of the city limits, it will adjoin the building now on the premises, the residence of the former owner, which will be utilized for kitchen and keeper’s lodge. The structure will be built for the most part of timber. The design is of Colonial architecture, of the period of George III. Messrs. Hamme & Leber are the architects and the work will be begun at once and pushed to completion.”

More details and photo of the second York County Courthouse 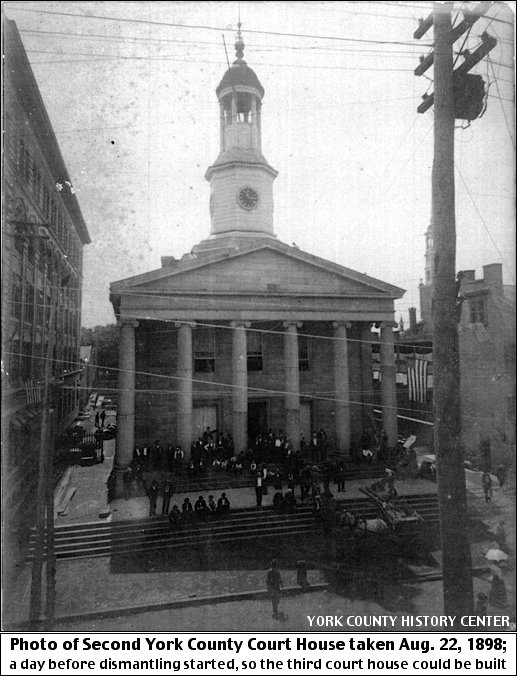 The six wooden columns in the cupola were thus set-aside in storage during 1898. Edwin Myers owned several warehouses in the city; it is possible that is where the columns were stored until utilized three years later in the construction of Myers’ Meadowbrook Mansion.

The Collections of the York County History Center contains the Isaiah Lukens clock mechanism and clock faceplate, which were within and mounted on the cupola of the second courthouse. The clock faceplate measures 59-inches diameter. With the clock faceplate as a reference dimension, the photo can be approximately scaled. The cupola columns appear to be between 15 and 16-inches diameter and between 14 and 15-feet high. These sizes appear consistent with the columns on the front porch of Meadowbrook.