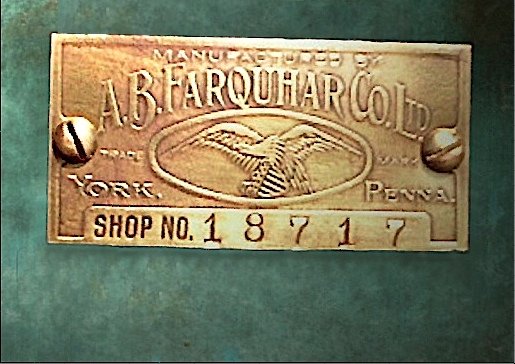 Conveyors are notable in the Farquhar story

Jim Hansen of Helena, Montana, inquired about a product I was not immediately aware of in the A. B. Farquhar Company history. However, research reveals conveyors have a notable place in the Farquhar story and were some of the final products manufactured at the massive Farquhar complex of factory buildings in downtown York.

Last month, Jim submitted this photo of a 1930 A. B. Farquhar Coal Loader at Northern Pacific Railway’s Bellingham, Washington, coaling station; photographed during circa 1950-1957. In 1930 the Northern Pacific Railway initially installed this coal loader at its coaling station in South Bend, Washington; prior to the loader being moved to Bellingham in 1950.

I keep a list of states where I have not received comments or queries to YorksPast posts. The September 2017 list on my bulletin board included nine states. After the e-mail from Jim Hansen, the list now has five states remaining to be scratched off: Alaska, New Mexico, North Dakota, South Dakota, and Wyoming.

A Brief History of Farquhar Conveyors

Originally A. B. Farquhar Company, Ltd. manufactured a small line of conveyors, which were marketed as implements in their farm machinery line of products; and generally used to assist farmers in moving harvested crops into barns or silos. About 1925, several other conveyor products were introduced, including coal loaders, which were adaptations of the farm conveyors. However it was in 1931, that Farquhar gained a dominant foothold in the conveyor marketplace.

Many of the major York businesses were in strong financial positions going into the Great Depression. Some used those financial resources to transform their product lines, such as Yorkco developing air conditioning products to replace ice-making products. While other York companies made strategic acquisitions and moved that production into their York factories; such was the case with A. B. Farquhar Company acquiring the top conveyor company in the country. That acquisition was a prime factor in allowing sustained employment at the Farquhar factory in York during the Great Depression.

The A. B. Farquhar Company, Ltd. acquisition of the Portable Machinery Company, of Clifton, New Jersey, took effect April 16, 1931; at which time Farquhar supervisors took over management of the factory in Clifton. This was done so an orderly move of all machinery in the Clifton factory could be made to the Farquhar factory in York; while continuing production of all orders. The Portable Machinery Company Division in the Farquhar plant was in full operation, producing a complete line of conveyors, by July 1, 1931; with many local laid-off factory workers called back to work.

By 1935 the conveyor business unit within Farquhar was renamed Portable Conveyor Division. Going into World War II, more Farquhar made conveyors were purchased in the country than any other make. By the end of the war, their coal conveyors had been so well accepted that more than 90 percent of that type conveyor used in the East were Farquhar built.

The massive Farquhar factory complex was only two blocks from Continental Square in downtown York. This is a circa 1940 southeast looking view of the factory, which spans several city blocks. I’ve added the street names for easier orientation.

As war production products gave way to peace time production, Farquhar’s factory focused on a return to manufacturing: Farm Equipment, Hydraulic Presses, Conveyors, Food Processing Equipment and Special Machinery. The robust conveyors, that had earned high marks for their reliability by the military, were the same conveyors Farquhar had built pre-war; and which Farquhar continued to build post-war.

The May 1950 advertisement in the Trade Publication “Factory Management and Maintenance” shows how A. B. Farquhar marketed their conveyor products. The places listed, to request additional information, were their factory headquarters in York and their mid-west regional sales office in Chicago.

Farquhar Division of the Chicago based Oliver Corporation

A front-page article in The Gazette and Daily of October 24, 1951 reported seven local stockholders, owning 72 per cent of the outstanding A. B. Farquhar Company shares, approved an agreement for the Farquhar farm and industrial business, a fixture in downtown York, to be acquired as a division of Chicago based Oliver Corporation. At the time it was reported Farquhar had 868 employees, and contracts with four labor unions. The acquisition was completed by years end.

The Farquhar Division became the ninth plant in the Oliver organization. Production of some long standing Farquhar products were moved to other Oliver plants. Generally the conveyor business unit saw little change under initial Oliver ownership. Later the York plant expanded conveyor production after it entered the custom conveyor systems market for industry and government agencies.

Conveyor systems for Post Offices became a big business for the Farquhar Division of Oliver, highlighted by mail and package conveyor systems for several of the largest post offices in the country, including: New York City, Chicago, San Francisco, Los Angeles, Pittsburgh, and Washington, D.C.

In the final year of Oliver Corporation ownership, the conveyor group continued to innovate. It appears the final patent issued to anybody working at the Farquhar plant was for a conveyor innovation. On February 13, 1959, Justin H. Hewitt, Jr. of Thomasville, Pa., while employed in the Conveyor Business unit of Oliver Corporation’s Farquhar Division in York, applied for a patent on a collapsible conveyor design. The design was issued United States Patent 2,938,614 on May 31, 1960.

During 1960, Oliver Corporation started selling off parts of their business, a move that affected many of their plants. On April 5, 1960, it was announced the profitable Conveyor Business unit, of Oliver Corporation’s Farquhar Division, was sold to Conveyor Systems, Inc., located in Morton Grove, Illinois. All Conveyor Business Unit operations in York ceased August 15, 1960 and combined manufacturing operations began about August 25, 1960 in the newly-enlarged plant of Conveyor Systems, Incorporated, in Illinois.

Closure of the Farquhar Factory

The York Dispatch of October 4, 1960 reported on the pending closure of the Farquhar factory in York; “Although no formal closing date has been set up at this time, employees were informed yesterday that present plans call for the complete suspension of manufacturing operations at the York plant as soon as it is practical to do so. The announcement, made by Plant Manager Lyle L. Lenth, came after a meeting in Chicago where Oliver’s directors approved an agreement for the sale of inventories and fixed assets of the firm’s farm equipment business on October 31 to White Motor Company.”

By the end of October, most of the remaining 300 employees in the Farquhar plant were tossed from their jobs and all useful farm equipment production machinery, which was part of the White Motor Company sale, was moved out of the Farquhar factory. The December 10, 1960, issue of The Gazette and Daily reported; “Today a skeleton crew of some 35 persons remain in the corpse of the 104-year-old industrial operation on North Duke Street. Most of them expect to be discharged within the month.”

The Farquhar plant was not part of the acquisition by White Motor Company. The skeleton crew finished manufacturing a few lingering, non-farm equipment related, production items for Oliver Corporation. Then the Farquhar factory was shuttered until June of 1961 when a five-day auction sold the remaining contents of the Farquhar complex of buildings.

Industrial Plants Corporation, a firm specializing in industrial sales, was in charge of the auction; which included everything from office typewriters to heavy machinery. Once all purchased items were removed, the Farquhar factory buildings were shuttered the final time.

Initially a few small sections of the plant were purchased and demolished to provide parking for neighboring businesses. However most of these buildings suffered a decade long demolition by neglect. When the Farquhar factory buildings had reached the state of becoming a nuisance, they were taken down by order of the city; such as shown in the following January 7, 1970, newspaper clipping.

Did any of my readers purchase anything at the 1961 Auction of Farquhar Plant contents? Things not sold at that auction, were simply left in the buildings. When the buildings were demolished, a decade later, I’ve heard people scrounged those ruins and found neat pieces of Farquhar factory memorabilia. Anyone care to share what was scavenged?