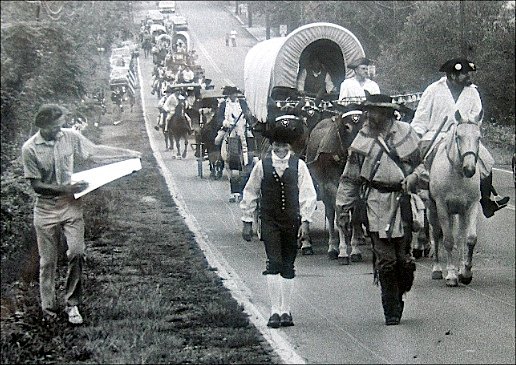 Lee Davis submitted information on the 200th Anniversary re-enactment of the westward march of the Continental Congress by way of Lancaster to York; which originally took place during September of 1777 upon the British capture of Philadelphia during the Revolutionary War. During the re-enactment, Lee Davis, a teacher at Eastern Area High School, portrayed Charles Thomson, Secretary of the Continental Congress.

It was discovered that Cliff Satterthwaite produced a number of drawings of this event. The introductory photo originally appeared in The Sunday News of Lancaster with a caption noting “an unidentified artist (left),” however I recognized the artist as Satterthwaite; so I contacted Cliff. And thus this identified artist caption for a submitted photo: Cliff Satterthwaite (left) draws the column of 75 persons and about 60 horses taking part in re-enacting the “Continental Congress March” from Lancaster to York, which originally took place during September of 1777; however 200 years later traveled the Lincoln Highway, here the column is seen moving west from Mountville.

I asked Cliff to provide a few remarks about creating that drawing. Turns out, just after the drawing was started, it started to rain, which did not deter Cliff from continuing to draw the event. Here are Cliff’s remarks: “As I drew on the wet bucking illustration board … the first segment … I walked a mite slower than the ‘moving march’ … thusly by doing so … I automatically observed and drew the next segment … and as the ‘march’ slowly pushed forward … I drew the next recipient … then the next … the next and … finally the last segment. I had to ‘engrave’ my graphite pencil into the illustration board since the rain soaked surface finally could not accept the graphite imagery.”

A limited number of drawings were created from the rain soaked original. The first of those is shown being presented to John F. Rauhauser by Cliff Satterthwaite. Judge Rauhauser is president of the York County Bicentennial Commission and the presentation is being made at the Colonial Courthouse in York, where the 1977 re-enactment ended.

The re-enactment took place over the weekend of September 24 & 25, 1977; leaving from Lancaster County Park and traveling to the Susquehanna River on Saturday, culminating with a river crossing on rafts. On Sunday the journey continued westward through York County to the re-created Colonial Courthouse where the Continental Congress met for nine-months.

Here is the Cliff Satterthwaite drawing of the 200th Anniversary re-enactment of the westward march of the Continental Congress by way of Lancaster to York; which originally took place during September of 1777:

The official Order of March, was in information provided by Lee Davis. The local re-enactors portraying the Delegates, from the various states, to the Continental Congress are in parentheses; along with where they are from:

One of the highlights of the re-enactment was the crossing of the Susquehanna River by the Delegates of the Continental Congress. Cliff Satterthwaite’s drawing of the stagecoach, carrying John Adams and Henry Laurens, at waters edge in Riverside Park follows:

The Lancaster New Era, issue of September 26, 1977, contained a photo of the crossing; with the caption: “In the Susquehanna River, at Columbia, two rafts of colonial soldiers and leaders move slowly towards York County Saturday in re-enactment of the Continental Congress March.”

The day before the re-enactment of the Continental Congress March, the Delegate re-enactors participated in three events in Lancaster. They re-created the meeting of the Continental Congress in Lancaster, held at the Heritage Center of Lancaster—Masonic Hall. An introduction and greeting of the Delegate re-enactors was held in Penn Square. In the evening a reception and dinner was held at Rock Ford Plantation, which is the historic home of General Edward Hand who served as Adjutant to George Washington during the Revolutionary War.

The Lancaster New Era, issue of September 24, 1977, contained a photo of the Penn Square ceremonies; with the caption: “Frank Fryburg, at microphone, introduces area men playing members of the Continental Congress of 1777 at greeting ceremonies in Penn Square Friday afternoon.”

From the moment it was engrossed on parchment, the Declaration of Independence became part of the records of the Continental Congress, and, as Secretary, Charles Thomson was responsible for all of the records.

Charles Thomson, portrayed by Lee Davis in the re-enactment, was custodian of the engrossed and signed parchment Declaration of Independence, as it traveled from Lancaster to York; just as in all likelihood, these documents did in 1777.

1 comment on “Congress travels 1777 style on the Lincoln Highway”