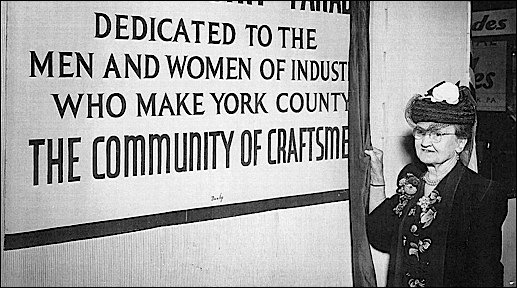 Miss Virginia Ruth, still actively on the job for over 60-years at P. H. Glatfelter Company, is given the honor of unveiling a dedication plaque to her fellow men and women of industry who make York County the Community of Craftsmen (Sept. 13, 1949 photo in Collection of York County History Center)
Posted by Stephen H. SmithJune 23, 2019December 3, 2019 All Posts, Businesses, Fair, Pennsylvania, Various Locations, York County

Virginia Ruth tops industrial seniority in The Community of Craftsmen

Miss Virginia Ruth was given the honor of unveiling a dedication plaque to her fellow men and women of industry who make York County the Community of Craftsmen. At the September 13, 1949 event, Miss Ruth was still actively employed by the P. H. Glatfelter Company, after over 60 straight years of service in the finishing department; having started working full time at the Spring Grove Paper Mill on May 2, 1889.

The 1949 event was the opening of a York Fair exhibit of 50 leading industries of York County; coinciding with launching a marketing campaign emphasizing York County as The Community of Craftsmen. Each of the exhibitors was asked to bring their oldest employee in point of seniority to the dedication program. From that group, the employee with the longest service record would be given the honor of unveiling the dedication plaque.

Virginia Ruth was born May 3, 1870, in North Codorus Township. During school breaks, starting at 11-years of age, she began part time work at the paper mill. On May 2, 1889, Virginia began working full time at P. H. Glatfelter Paper Mill. On October 1, 1949, Virginia retired after over 60 straight years of service in the finishing department.

Virginia was never injured on the job, however in retirement, at a company picnic, her left forearm was fractured. On July 12, 1952, at Williams Grove Park, Virginia was injured when a large limb of a tree fell on her while she was seated at a picnic table. Ross B. Welsh, safety director of the Glatfelter plant, drove Virginia and Dr. S. T. Shue, who was attending the picnic, to the York Hospital; where Virginia’s arm was placed in a cast.

The Community of Craftsmen

During World War II, “Community of Craftsmen” was often used by outsiders to describe York County industry. Government contractors and companies throughout the country bestowed this depiction, in admiration particularly of York County tool and die machinists who often devised tooling to make parts that were otherwise deemed non-makeable.

Beginning in 1947, a few York County companies started to advertise marketing messages that their products are made in York, Pa., “the Community of Craftsmen.” After the Manufacturers’ Association adopts an insignia with this message in 1949, “The Community of Craftsmen” is promoted more widely for the next decade. The insignia also appeared in store ads during the 1950s. The following is from a 1957 Sears advertisement for one of their “Industry Appreciation Days” sales.

Quoting the full text on the plaque, unveiled by Virginia Ruth on September 13, 1949: “YORK INDUSTRY on PARADE, Dedicated to the Men and Women of Industry who make York County THE COMMUNITY OF CRAFTSMEN.”