In 1888, the York County Agricultural Society moved the York Fairgrounds from their East King Street site to their present York Fair/York Expo Center property, west of York. This postcard contains a westward looking view of the present York Fairgrounds race track during the very late 1800s or very early 1900s; in the years prior to the construction of the Grandstand Stage. During that time, the infield of the half-mile race track was occasionally used for football games during the Fair.

The following article appears in the Thursday, October 5th, 1899, issue of The York Daily. This early sports article gives details about the College Football Game played between Dickinson College Reserves and the York Collegiate Institute teams on Wednesday morning at the York Fairgrounds during the York Fair. For easier reading, I’ve transcribed everything, following the original article: 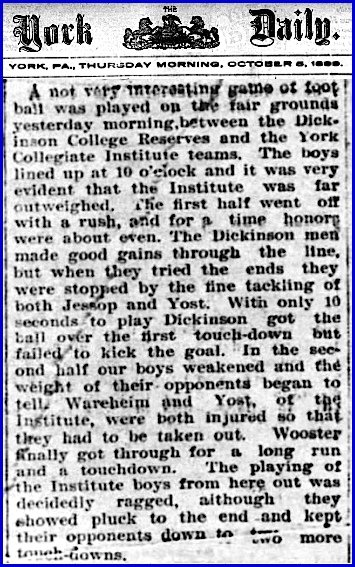 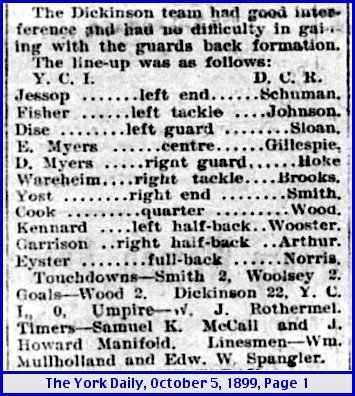 A not very interesting game of football was played on the fair grounds yesterday morning, between the Dickinson College Reserves and the York Collegiate Institute teams. The boys lined up at 10 o’clock and it was very evident that the Institute was far outweighed. The first half went off with a rush, and for a time honors were about even. The Dickinson men made good gains through the line, but when they tried the ends they were stopped by the fine tackling of both Jessop and Yost. With only 10 seconds to play Dickinson got the ball over the first touch-down but failed to kick the goal.

In the second half our boys weakened and the weight of their opponents began to tell. Wareheim and Yost, of the Institute, were both injured so that they had to be taken out. Wooster finally got through for a long run and a touchdown. The playing of the Institute boys from here out was decidedly ragged, although they showed pluck to the end and kept their opponents down to two more touch-downs.

The Dickson team had good interference and had no difficulty in gaining with the guards back formation.

The line-up was as follows:

The following are a few early college football milestones, from my post George S. Billmeyer; All American Football Player in 1869. In 1880, the number of players on the field, from each team, was lowered to 11; as we have today.  In 1882, the rule of using yards and downs was added; requiring a team to make 5 yards in 3 downs. In 1906 the forward pass was legalized; 37 years after the first college football game!  And it took until 1912 for the rules refinement to the present system we now have: 4 downs to make 10 yards.

The following article from the December 3rd, 1903, issue of The York Daily provided a glimpse into the football teams of the York Collegiate Institute. 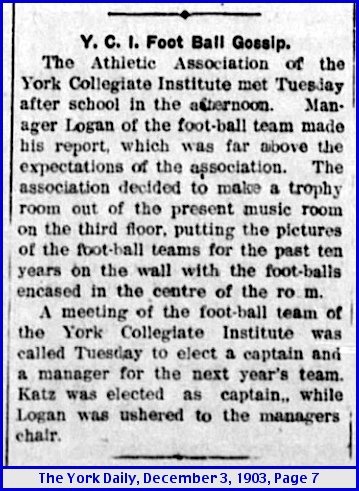 A meeting of the foot-ball team of the York Collegiate Institute was called Tuesday to elect a captain and a manager for the next year’s team. Katz was elected as captain, while Logan was ushered to the managers chair.

The article implies that football started at the York Collegiate Institute about 1893. Carol McCleary Innerst included a photo of the 1902 Y.C.I. football team on page 79 of her book: York College of Pennsylvania, in The Campus History Series. Quoting two lines from that photo caption:

YCI dropped football either after the 1905 season or the 1912 season when the coaches decided that the boys were too light and inexperienced to withstand the “buffeting” received in games. YCI apparently did not field a team again until the 1920s.

Also on page 79, the caption on a 1899 photo of the YCI Athletic Association reveals the likely given names, or initial, of a few of the football players from the 1899 game: