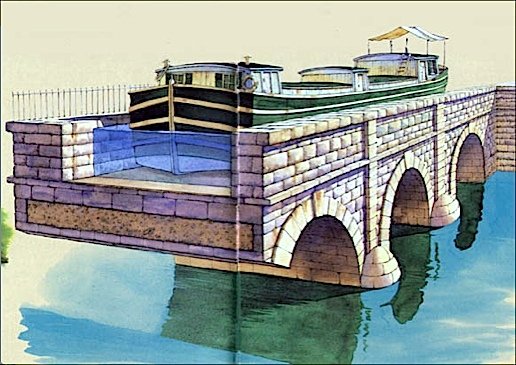 A cross-sectional illustration of a canal bridge (or aqueduct) design, typical of those used on the Chesapeake and Ohio Canal, which solved the problem of what to do when a canal crosses paths with a creek. (Source: C&O Canal National Historical Park)
Posted by Stephen H. SmithNovember 5, 2021November 7, 2021 All Posts, Bridges, Businesses, Maryland, Pennsylvania, Springettsbury Township, Susquehanna River, Talks, Transportation, Various Locations, York County

Canal bridge illustrations and photos are used to answer questions of how did the Codorus Navigation canal cross paths with intersecting waterways; such as Mill Creek and Dee Run in York County. An often-related follow-up question concerns the same issue when the Susquehanna and Tidewater Canal crossed paths with intersecting waterways; such as Otter Creek and Muddy Creek.

The YouTube video of the Aviation in Springettsbury presentation at Springettsbury Township History Night on July 14, 2021 also can still be accessed through this link.

A canal bridge solves the problem of what to do when a canal crosses paths with a creek. Both are waterways, but the canal is a self-contained channel and cannot temporarily merge with the creek because all of its water will either spill out uncontrollably or interfere with the smooth operation of the canal boats. The solution is to elevate the canal over the creek by a bridge structure. In essence, a large, elevated water trough must be built. The water trough does not have to be perfect; since a small amount of water can leak through from the canal into the creek.

The canal bridge design solution can be as simple as a small culvert to carry water flow, from a tiny intersecting creek, under a canal; to the massive undertaking of constructing an all-stone aqueduct over larger flowing intersecting waterways. The lead illustration of this post is an example of the latter; showing a cross-sectional illustration of the aqueduct design, typical of those used on the Chesapeake and Ohio Canal.

It is likely the canal bridges utilized along canals within York County employed a less expensive approach, which uses a combination of stone supports with wooden bridge structures. A common canal bridge, of that construction, utilized the King Post support structure; as shown in the following 1911 photo of the remains of such a canal bridge in Ohio.

The stone abutments, which presently exist where Dee Run empties into the Codorus Creek, seem to be overly massive for the present personal property bridge at that location; therefore the abutments may go back to the mid-1800s, and the days of the Codorus Navigation Works. The following is the visualization of that short canal section, requiring a canal bridge over Dee Run, between Dam 7 and Lock 9 of the Codorus Navigation Works. Discussion of this section begins almost exactly at the one-hour mark in the YouTube video.

Another design practice for wooden trough canal bridges is shown in the following photo and drawing. Yes, there were Covered Wooden Canal Bridges!

The 1934 photo shows the remains of the Whitewater Canal Bridge spanning Duck Creek in Metamora, Indiana. The 3D drawing shows the original 1846 construction of this Burr Arch Truss Canal Bridge; with right side walkway allowing the mules to cross the waterway.

The drawing was done as part of a restoration effort, which returned the wooden trough canal bridge to operating condition immediately following World War II. This canal bridge is on the National Register of Historic Places and is a National Historic Civil Engineering Landmark.

Use this link to the main Codorus Navigation Works post; containing links to all the individually researched sections.