In search of the Codorus Canal 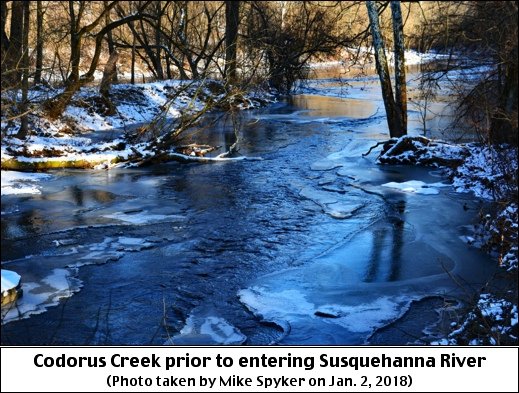 This is the beginning of a new series of YorksPast posts; as I search for additional details about the Codorus Canal. Two years ago, upon researching my post Codorus Tow Path Railroad to Chickies I uncovered some interesting Codorus Navigation Company court cases. I have since discovered a diary and newspaper articles containing further neat information about the Codorus Canal.

Mike Spyker offered to brave the cold and got some great photos that will be used in this series. This photo was taken down stream from the Codorus Furnace, just upstream from where the Codorus Creek enters the Susquehanna River. This photo likely shows the path of the canal exiting the last lock and rejoining the mainstream of the Codorus Creek, prior to entering the Susquehanna River. Click on this LINK for a Full View of the illustrations in this post if details are cut off in the cropping of illustrations.

The Codorus Canal series of YorksPast posts will be rolled out much like I did with the 19-part series on the History of The Susquehanna Trail. I’ll start with widely available information and progress to the newly uncovered details, while throwing in some annotated maps along the way.

George Prowell’s 1907 History of York County records the following about the York Navigation Company on page 608 of Volume I:

“A charter was granted for the construction of a canal from York along the Codorus Creek to the Susquehanna River, in 1825. The names of the commissioners mentioned in the charter were Jacob Spangler, George Small, Jonathan Jessop, John Barnitz, Clement Stillinger, John Demuth, George Loucks, Charles A. Morris, Daniel S. Dunn, Jacob Eichelberger, Michael Doudel and John Meyer. The contract for the construction of the navigation was given, in 1830, to George Wasson, Henry Charles, Solomon Ruthrauff and Christian Hildebrand, who agreed to build it for the sum of $47,350. In 1831 a number of stockholders made an excursion down the canal as far as it had been completed. At a meeting held Charles A. Barnitz, president, described the advantages of the canal to the borough and county of York. In June 1832, Gottlieb Ziegle, James Schall and Daniel Ford launched the ‘Pioneer,’ a boat forty feet long. In July of the same year James Chalfant launched his boat, the ‘Codorus,’ which was seventy feet long. This boat could carry 150 passengers. On July 4, 1832, an excursion passed down the canal a distance of three miles from York, where the day was celebrated on the banks of the creek.”

“In November, 1832, the navigation to the mouth of the Codorus was completed. On the 18th of November the first ark arrived from the Susquehanna with a load of about 40,000 feet of lumber and 100 or more people on board, who had gone to witness the opening of the navigation. The second ark contained 70,000 shingles, which were consigned to Joseph Schall and Company. For a time a large business was carried on over the canal in the transportation of lumber, coal, grain, and other products, but the construction of the York and Wrightsville railroad, and in 1849-50 the York and Cumberland Railroad to Harrisburg, caused the value of the Codorus Navigation to diminish, and it soon ceased to be operated.”

Prowell’s history incorrectly states “In November, 1832, the navigation to the mouth of the Codorus was completed.” I’ve discovered several newspaper articles that are more credible sources, since all were published only days after the initial canal boat arrived in York from the Susquehanna River on November 9, 1833.

John Gibson’s 1886 History of York County adds the following detail about the canal of the York Navigation Company on page 335: Of the eleven miles distance between York and the mouth of the Codorus Creek, “three miles consisted of canal and eight miles of slack water.” 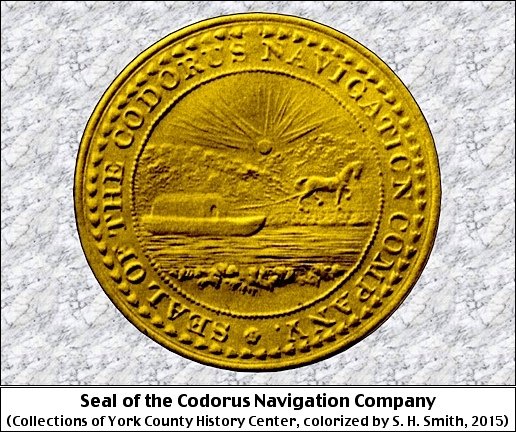