The second mural is the one that Cliff Satterthwaite previously provided a copy, however here is a photo of that 41-year-old mural hanging in the York Haven Borough Hall. Both of these photos are of the murals lighted solely with the sunlight coming in through the entrance door.

This mural is on the right wall, as one enters the York Haven Borough Hall; it is a view looking from York Haven across the Susquehanna River towards Falmouth, Lancaster County. The mural depicts canal operations in York Haven during the 1840-1850s era. The following photo is a close-up of Cliff Satterthwaite’s signature on the lower left side of the mural. 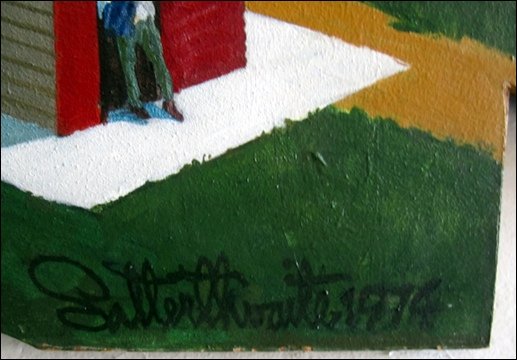 The entrance lobby, off of Pennsylvania Avenue, is where Cliff Satterthwaite’s murals now hang. This lobby serves as the entrance to the York Haven Borough Offices on this floor. The lobby also contains the stairs to the large community room on the second floor of this 95-year-old stately building, constructed by the York Haven Paper Company for the Borough of York Haven.