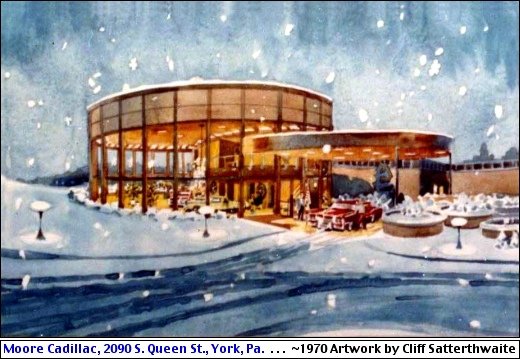 Moore Cadillac is captured by the artwork of Cliff Satterthwaite in this Winter Scene, when this Cadillac Dealership was located on the corner of South Queen Street and Tyler Run Road in York Township. Moore Cadillac began as White Rose Motors at 247-255 West King Street in the City of York; being established July 13, 1938 to provide sales and service for Cadillac and Oldsmobiles. In 1962, White Rose Motors establishes a Used Car Department at 3455 East Market Street, in Springettsbury Township. The name of the dealership changed from White Rose Motors to Moore Cadillac, effective November 1, 1965; with Jacques J. Moore at the helm.

During the troubles in York during the late 1960s, much of Moore Cadillac’s new car sales were sifted from the city location to their Used Car showroom and service bays at 3455 East Market Street. While there, Moore Cadillac planned a permanent ultramodern showroom in the suburbs, as illustrated, with modern service facilities to the rear, at 2090 South Queen Street. The new car part of their business occupied the South Queen Street buildings in 1970 and their Used Car facility in Springettsbury closed in 1971. In 1972, those old Cadillac dealership buildings at 3455 East Market Street were remodeled into the principle bakery of Maple Donuts, and they continue to bake mass quantities of delicious donuts at that location today.

In this artwork, South Queen Street is across the bottom, in the foreground. Near the right side, the roadway going back into the distance is Donna Lane. A small part of the Used Car lot is shown at the extreme right side of the artwork. 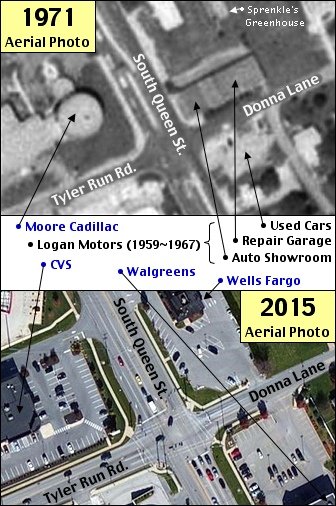 The showrooms, in the round, of Moore Cadillac are pointed out on the corner of South Queen Street and Tyler Run Road. Even though Logan Motors was purchased in 1967 and eventually moved, all their facilities still remained during 1971 and are pointed out on the Aerial Photo. I’ve also pointed out Sprenkle’s Greenhouse, which if you look closely at the left side of Cliff’s artwork, shows up in the background. Using the end of the greenhouse as a reference guide, it appears Cliff was located on the south side of Tyler Run Road, just about under the ‘Run,’ to create this artwork of Logan Motors.

A 2015 Bing.com Aerial Photo, at the same scale, is annotated to show the corresponding intersection today. The Cadillac dealership was purchased by Apple Automotive Group and moved to Route 30, just west of Roosevelt Avenue. CVS occupies the former Moore Cadillac site today.

South Queen Street was a two-lane road, when Ted Logan opened his dealership there in 1959. Shortly after Logan Motors was sold, South Queen Street was widened to 4-lanes and Donna Lane was widened from a lane into a road with shoulders; this eliminated space in front of the showroom and reduced parking beside the repair garage, effectively eliminating the usefulness of this building as a automobile dealership. The former Logan Motors complex is now occupied by the parking lots of Walgreen’s and Wells Fargo.

The left part of Cliff’s artwork was used by Ted Logan to advertise his dealership. Such is the case in this Logan Motors ad, appearing on Page 7 of 1964 Polk’s York, Pa. Directory. Continue reading for additional details about Logan Motors, including its Glen Rock origins.

I discovered an unusual handwritten will in the Estate Files at the York County Archives. Ted Logan’s three-sentence Will, dated August 19, 1964; was written on the company letterhead. 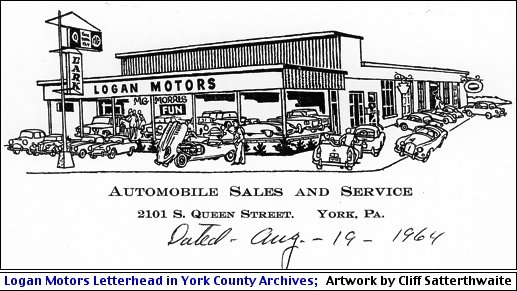 One of the sentences in Ted Logan’s Will stated, “I request that my business, Logan Motors, be offered to my Employees to purchase 1st before selling to any other.” His widow Laura Seitz Logan was left all assets, including the business. After Ted Logan died on August 28, 1964, Laura Logan decided to continue operating Logan Motors as owner and operator. Laura Logan did so until 1967, when after the employees declined purchasing, the business was sold to York County Motors. 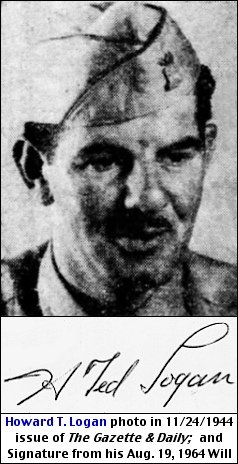 This 1944 photo of Howard Theodore (Ted) Logan shows him serving in the Army Air Forces during WWII. Upon discharge from the military, Ted Logan bought the Glen Rock Garage, on Main Street, from Charles F. Sechrist on February 1, 1946, and named the business Logan Motors.

In 1950, Ted Logan purchased the W. F. Grove Auto Company on the southeast corner of South Queen Street and Springettsbury Avenue in the City of York. Ted moves Logan Motors from Glen Rock to that location in 1950; i.e. 901 South Queen Street.

Logan Motors handled a wide variety of cars in the 21-years of its existence. The following list of makes is approximately ordered by most years they were offered: MG, Morris, Midget, Austin, Austin-Healey, Jaguar, Studebaker, Lark, Hawk, Renault-Dauphine, Rambler, Sprite, Daimler, Metropolitan, Triumph and Jeep.

For you enjoyment of Cliff’s attention to detail, I’ve zoomed-in on the Cliff Satterthwaite artwork from the Logan Motors letterhead: 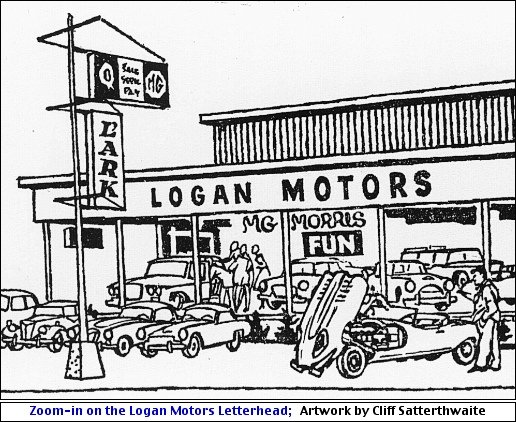 Related posts are of the Brennemen’s One-Room Schoolhouse that occupied the corner of South Queen Street and Donna Lane prior to constructing the Logan Motors Showroom in 1959.