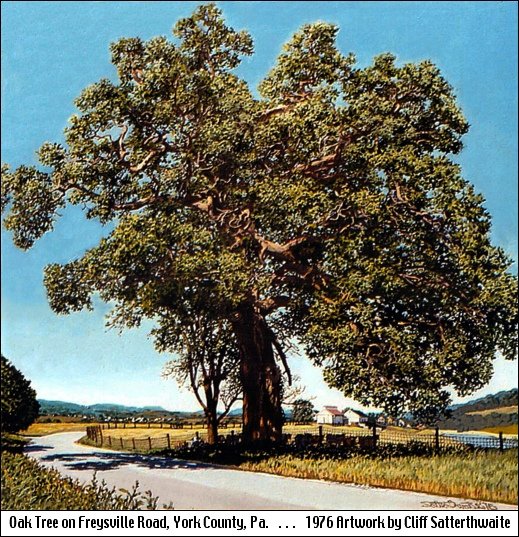 I stopped to see Cliff Satterthwaite in Fredricksburg, Virginia, on my way back from Virginia Beach this past weekend. His home is an art gallery, containing many York County related pieces, from the 25-years he lived here; beginning in the mid-1950s.

Cliff started flipping through selected pages in a notebook of York County artwork and the second page he stopped at was a photo of this 1976 artwork of a giant oak tree along Freysville Road in Hellam Township. Unknown to Cliff, two weeks prior I had already taken the Now Photo for a ‘Then and Now’ of this scene. I told Cliff to look for the post early this week.

At one time, this giant oak tree stood at the curve in Freysville Road, located just north of where Old Orchard Road intersects Freysville Road. The following is my Now Photo of this same scene. 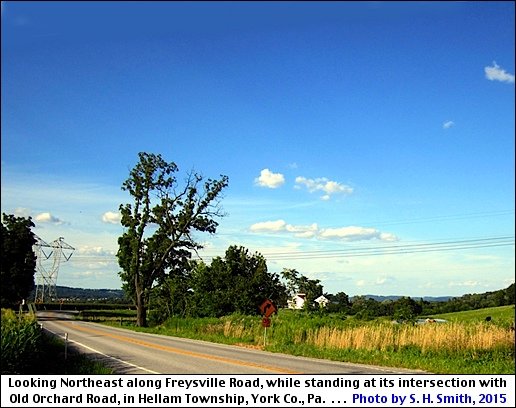 If I remember correctly, storms took down most of the limbs of this tree. Part of the massive tree trunk stood for a while, before it was cut down. However the tree trunk was not immediately cut-up, it lay as one massive piece at that spot for some time. One time when I was stopped at the nearby Stop Sign on Old Orchard Road, a couple where taking pictures with each other standing beside the felled truck; observing these people standing beside it, a diameter of between five and six-feet was likely. 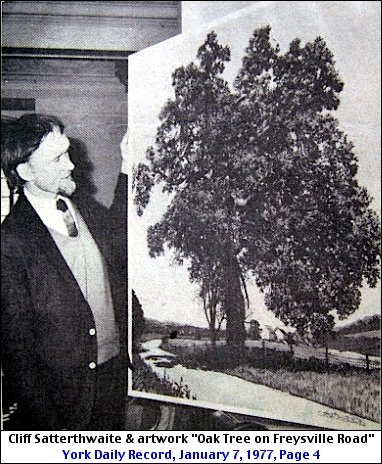 The painting of the oak tree was also on a large scale. In this photo from the January 7, 1977, issue of the York Daily Record, Cliff Satterthwaite stands next to his four-feet square painting of the oak tree. The newspaper caption for this photo noted the painting would be among the paintings, prints and drawings displayed by Cliff Satterthwaite in a one-man show in the lower narthex of Christ Lutheran Church, 29 South George Street in York.

Links to selected YorksPast posts with Cliff Satterthwaite artwork include: