York County Posts of the Grand Army of the Republic 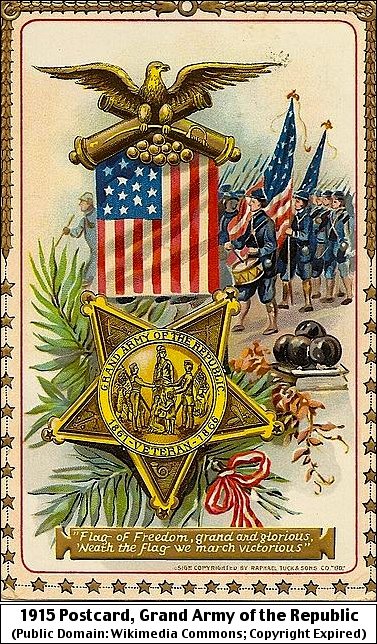 This postcard shows a badge with flag ribbon; a design approved by the United States Congress and authorized to be worn by comrades of the Grand Army of the Republic. To become a member of the G.A.R., a man must have served the Union during the Civil War and be honorably discharged from the United States Army, Navy, Marine Corps, or Revenue Cutter Service; known today as the Coast Guard. The postcard was printed in 1915 for distribution at the various G.A.R. Encampments that year.

Dr. Benjamin Stephenson founded the G.A.R. on April 6, 1866, in Illinois. It was one of several organizations, for veterans, which formed following the Civil War. The Grand Army of the Republic was the most successful of those organizations; it grew and prospered throughout the United States, anywhere Union Veterans lived, becoming the first nationwide veterans organization in the United States.

The G.A.R. became a powerful political force. They were responsible for officially getting May 30th established as Memorial Day and in lobbying Congress to establish regular veterans’ pensions. Six U. S. Presidents were members of the Grand Army of the Republic. Albert Woolson, at 107-years-old, was the last member of the G.A.R.; whereupon the Grand Army of the Republic was formally dissolved upon his death in 1956.

G.A.R. Comrades formed local Posts under the sponsorship of an established Post. All Posts, within every state, were known as a Department; the States held Encampments to decide the business of the organization. There was also one National Encampment each year. The membership of the Department of Pennsylvania, G.A.R., peaked in the mid-1890s at 44,100; the same time the national membership peaked at almost 500,000 veterans, which represented about 40% of the Union veterans still living at that time.

Continue reading for details on the York County Posts of the Grand Army of the Republic.

York County Posts of the Grand Army of the Republic

The information about York County G.A.R. posts is scattered throughout the Proceedings of this 31st Annual Encampment. In the following illustrations, I’ve pieced together photocopies of the York County details from throughout the 1897 Roll of the Encampment and added the number of Members in Good Standing, within each post, as of December 31st, 1896 (which appeared elsewhere in the Proceedings). A ‘*’ before a name, indicates they are a member of a Department of Pennsylvania G.A.R. committee and a ‘P.C.’ following a name, stands for Post Commander. 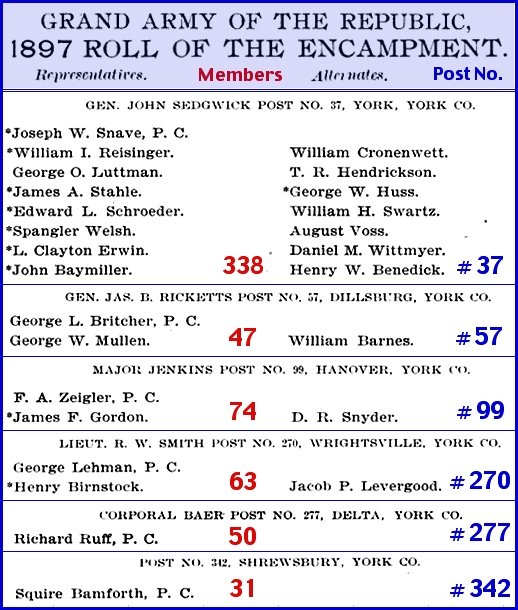 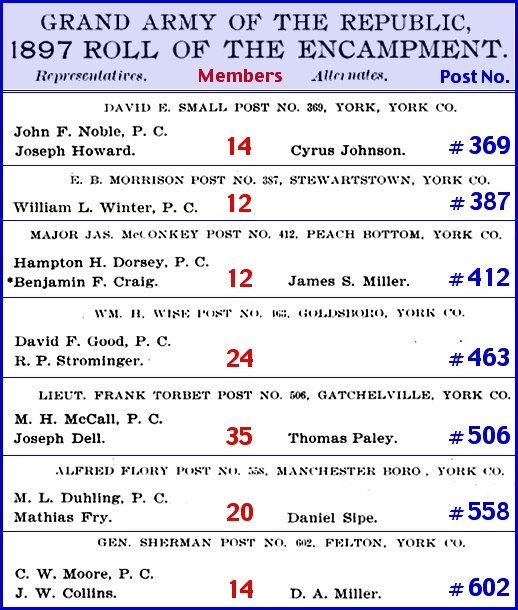 As of December 31st, 1896, there are 734 comrades, counted as members in good standing, within the 13 York County G.A.R. Posts. There were 44 comrades, from York County, attending the 1897 Pennsylvania Encampment in Johnstown; from the illustrations, I’ve listed their names alphabetically: