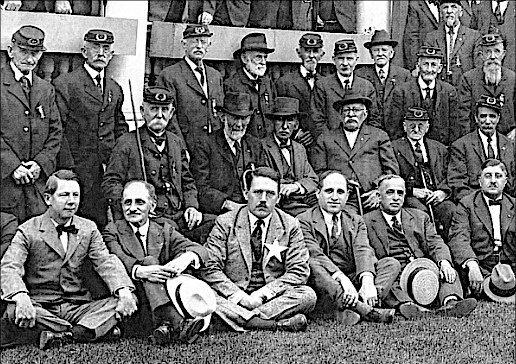 Thirty-nine Civil War Veterans were Kiwanis Banquet guests in the York Motor Clubhouse at 2025 East Market Street during 1922. Mahlon Haines was the guest speaker, as he was running for a seat in Congress. Mahlon is in the extreme lower left, within the close-up portion of the group photo.

The York Dispatch, issue of May 26, 1922, reported on the York Kiwanis Club dinner at the York Motor club the previous evening: “The speaker for the evening was Mahlon N. Haines, Republican candidate for congress, who in his talk discussed the promiscuous use of money in political campaigns. No money, except that used for necessary advertising, should be spent by a candidate for political office, he said.”

“The men of the Grand Army of the Republic were met at the Court House by members of the Kiwanis Club and driven in their machines to the Motor Club. Here a photograph of the G.A.R. and the Kiwanis Club was taken. Old songs of Civil War days were sung and many of the “old vets,” joined in heartily. The Melody Land Five furnished the music for the evening.”

“There were five guests besides the veterans—C. A. Greenawalt, W. T. Hess, Marvin Thomas, Alvin Hockey and Mahlon N. Haines.”

“Mr. Haines, who was introduced as the speaker of the evening, disclaimed oratorical ability from the beginning, but said if he had a subject it might be called ‘Duty Done Is Honor Won.’ He paid a tribute to the veterans there and the duty that they had performed.”

“The American public, he said, had two paramount duties, the first and foremost being American home. This, he said, must be kept pure and powerful. Social organizations and chambers of commerce have a wonderful job for civic improvements, but they are but the side show in which the main circus is the home.”

“The second duty, he said, was clean politics. ‘I am not going to talk politics,’ said Mr. Haines, ‘for I am not built that way, but I do think York and Adams Counties need to start new methods in politics. There should be a man-to-man and house to house movement demanding that politics shall be clean. They tell me I must spend at least $30,000 to get to Washington. Until it costs only the necessary money for advertisements then you Kiwanians and G.A.R. men have not done your duty.”

The Evening Sun of Hanover, on September 22, 1922, had this to say about Haines’ campaign: “The style of campaign being staged by Mahlon N. Haines, the Republican candidate for congress, is altogether new to York County voters and has been the subject of much discussion at the political headquarters.” Haines not only used newspaper advertising, such as the following ad appearing in The Gettysburg Times; he originated many unique ways to get his picture and slogan “This Is the Man—Mahlon N. Haines for Congress” in front of the public, including airplanes with messages on the underside of wings.

In the November 7th, 1922, election for Representative in Congress from the 22nd District (York and Adams Counties), Mahlon N. Haines garnered 17,694 votes in losing to Samuel F. Glatfelter, with 22,181 votes. Representative-elect Samuel Glatfelter is a building contractor in York.

In the loss, Mahlon Haines made the statement: “I thank every one who voted for me yesterday, and my wife thanks everybody who voted against me. I lost in the election. She won by the voters having decided that I remain at home instead of going to Washington to represent them.”