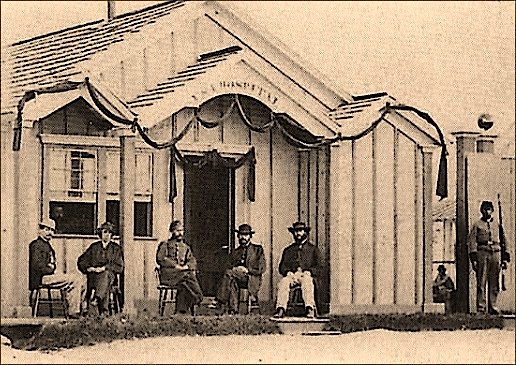 Soldiers outside one of the many U. S. Army General Hospital buildings, which was located in Penn Park in downtown York, Pennsylvania, from 1862 until 1865. (Source: York County History Center, from cover of 2012 Journal of York County Heritage)
Posted by Stephen H. SmithAugust 17, 2020September 12, 2020 All Posts, Buildings, Civil War, Pennsylvania, Roads, Spring Garden Township, York County

Connecting the dots on the naming of Powder Mill Road may go back to inspection visits to the U. S. Army General Hospital in Penn Park during the Civil War. A lasting positive impression of the hospital and the York Community could have influenced Dr. Thomas C. Brainerd to select York as the site for his powder mill venture in 1874; which led to the naming of Powder Mill Road.

My post How Powder Mill Road got its name proved very popular. Thanks for the comments! Many wanted Civil War details about Dr. Brainerd, while often questioning, any connection to York or Gettysburg? This post provides the answers.

The introductory photo shows soldiers outside one of the many U. S. Army General Hospital buildings, which were located in Penn Park in downtown York, Pennsylvania, from 1862 until 1865. It was an impressive complex of buildings; providing 14 hospital wards, operating rooms, infirmaries, laundries, kitchen, bakeshop, mess hall, wash rooms, chapel, mortuary, library, post office, printing office, cabinet and carpentry shops.

Initially, the hospital in Penn Park accepted soldiers from overcrowded field hospitals in Virginia, however soon saw large influxes of wounded from the nearby Battles of Antietam and Gettysburg. As of December 1864, the hospital in Penn Park had a bed capacity of 1,600; although in the warmer months, when battle casualties increased, 100 tents were added to the complex to accommodate an additional 1,500. The patients ate in shifts; up to 800 at a time.

The hospital had its own weekly newspaper, The Cartridge Box, printed on site by the hospital patients and staff. The Collections of the York County History Center contain the complete run of that U. S. Army General Hospital Newspaper.

I’ll quote a friend’s research request from 2008, to answer readers wish for Civil War details about Dr. Brainerd: “In two years, 1874 to 1876, Dr. Thomas Chalmers Brainerd (b. 27 Sept. 1837, d. 24 Apr. 1910) became a significant player in the powder business; by exhibiting superior powder chemistry knowledge, production expertise, plus sales and distribution skills, while in charge of his powder mills in York, Pa. So much so that when the Gunpowder Export Association was chartered in 1876, with headquarters at Montreal, Canada, Dr. Brainerd was offered and accepted its management. He would also become President of the nearby Hamilton Powder Company.”

“Request: Would like to know the location, size, and any other specifics, of Brainerd’s powder mills in York, Pa. Other than the manufacture of his improved blasting powder and making a significant name for him self, not much else is known about Dr. Brainerd from 1874 to 1876. Why did Dr. Brainerd select York, Pa., for this venture? Can you share any local stories of visits of Dr. Brainerd to the Army Hospital in York, during the Civil War?”

“When Dr. Brainerd was in charge of Mower General Hospital (from July, 1864, to May, 1865), he made visits to all of Department of the Susquehanna Army Hospitals. Those hospitals were in an area stretching from Philadelphia to Chambersburg in southern Pennsylvania. Best practices were observed and shared. Those visits would have included the large Army Hospital in York, Pa. I’ve read that hospital was extremely well run, with wonderful community support. Such a positive impression of the York Community may have influenced Dr. Brainerd in selecting York as the site for his powder mill venture.”

“Dr. Thomas C. Brainerd served as a Surgeon in the Union Army. In a history of Yale’s Class of 1859, this Civil War account of Dr. Brainerd was published: “After graduation he entered the Jefferson Medical College in Philadelphia, being also an office pupil of Professor S. D. Gross, M.D., and a demonstrator of anatomy in the private school of Dr. D. Hayes Agnew. At the outbreak of the Civil War he applied for admission to the medical corps of the U. S. regular army; was examined in New York with ninety-four others, and passed fifth in rank. He was then ordered to Washington and placed in charge of the General Hospital. In January, 1862, he was ordered to Port Royal, S. C., was for a time on the staff of General W. T. Sherman, and was then assigned to duty with the regular army batteries of the department, where he served for about two years, on one occasion, at the battle of Pocataligo, himself being away a battery whose officers had all been disabled and the ammunition exhausted. He was then put in charge of the hospital steamer Cosmopolitan carrying to New York wounded and sick soldiers from southern ports, and later was ordered to Philadelphia, as executive officer of the Mower General Hospital, of which he was subsequently in charge, as he was later of the Broad Street, McClellan, and Bristol Hospitals. He received two brevets for faithful and meritorious service, was examined for promotion, and when passed was ordered to duty with the Third U. S. Cavalry in Arkansas and Mexico.” After nearly five years of service, Dr. Brainerd resigned from the U. S. Army on May 28, 1866.”

The request for the location, size, and any other specifics, of Brainerd’s powder mills in York was answered in 2008 via historic maps and deed searches. Those results, with a few new details and illustrations, were shared last week in the post How Powder Mill Road got its name.

In 2008, I was not able to locate local stories of the visits of Dr. Brainerd to the U. S. Army General Hospital in York, during the Civil War. A few years later, I looked through the microfilm containing issues of The Cartridge Box, which was published from March 5, 1864 through July 8, 1865. That time frame has a nice overlap with July, 1864, through May, 1865; which is when Dr. Brainerd was in charge of Mower U. S. Army General Hospital. When reviewing the microfilm, Brainerd did not pop-out, although I might have missed it; easy to do when looking at microfilms for extended time. I thought I’d now have a chance with Newspapers.com, however was not successful. It would be a great research resource to have The Cartridge Box searchable; details about the visits by Dr. Brainerd are likely in that publication.

The Mower U. S. Army General Hospital was a very large hospital in the Chestnut Hill area of Philadelphia. The bird’s eye view gives a sense of the 47-building complex that housed 3,600 beds and treated over 200,000 patients from January, 1863, through May, 1865.

The Mower U. S. Army General Hospital was located on 27-acres, extending to Stenton Avenue and bounded by Abington and Springfield Avenues. The site was opposite a Reading Railroad station; shown in the foreground of the bird’s eye view. That station is now known as Wyndmoor Station. Mower U. S. Army General Hospital was razed following the war; which was the same fate of the hospital in York’s Penn Park.

From the railroad station, only a few steps away, an injured soldier would see the following view of the entrance to Mower U. S. Army General Hospital.

Links to a few other “naming” posts include: