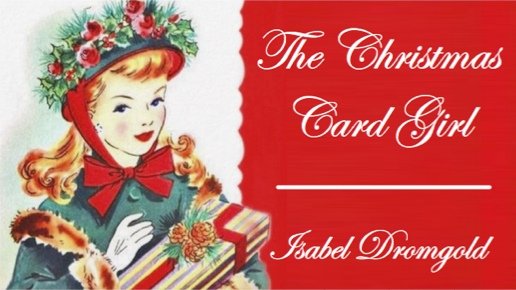 Isabel Dromgold established The Christmas Card Girl greeting card business in York during 1926. Isabel already operated several stores in York during the 1930s, when she began conducting, what grew into a worldwide greeting card mail-order business; from her home on Rockburn Street in the East York section of Springettsbury Township.

In September I received the following e-mail from Alice Krebs: “I discovered your Rockburn Street posts and figured you might like to unravel the story of Isabel Dromgold. Many years ago my Uncle showed me a collection of stamps from around the world. More recently within the effects of my Aunt was a card with “The Christmas Card Girl” and “Isabel Dromgold” on the front and “Rockburn Street, East York” on the back. As soon as I saw it, I remembered that was the source of the stamp collection. Card in hand, I clearly recalled my Uncle telling me a Christmas Card Girl got orders from all over the world and let him have the empty envelopes; providing the stamps for his collection. I presume Isabel was the Christmas Card Girl; got to be a story there.”

I did discover the story of York businesswoman Isabel Dromgold, however saved the posting until now, closer to Christmas, for obvious reasons. The following is a present view of the 15 North Rockburn Street home where Isabel Dromgold conducted a mail-order greeting card business:

Alice’s memories of her Uncle showing her the stamp collection have the Christmas Card Girl’s home being the location of a mail-order business; that claim was bolstered via a Newspapers.com discovery. In the List of Retail Mercantile Licenses in Springettsbury Township for 1935 is the listing “Christmas Card Girl—Isabel Drumgold . . . 15 N. Rockburn”. The mail-order business, at her home, appears to exist from the mid-1930s until the mid-1940s; concluding upon the accidental death of Isabel on March 20, 1946, when she was 50-years-old.

The Fictitious Names files of the York County Archives confirmed “The Christmas Card Girl” was officially registered as the name of a greeting card business to Isabel Drumgold in 1926.

I wondered if Isabel Dromgold had any connection to The Hench and Dromgold Company. She did. Isabel is a daughter of Walker A. Dromgold; one the founding partners in this Agricultural Implement manufacturer in York.

With that discovery I knew Isabel grew-up along Linden Avenue in York. The following photo shows the neighboring Victorian homes of the business partners Walker A. Dromgold (515 Linden Avenue) and S. Nevin Hench (505 Linden Avenue; however lately known as The Lady Linden, Bed and Breakfast).

Kathryn Isabel Dromgold was born September 9, 1895 and graduated with the Class of 1912 from York High. Upon graduating, Isabel rarely used Kathryn and only occasionally used K. Isabel Dromgold.

After graduating from high school, Isabel Dromgold worked as a clerk; first at manufacturing companies, then in Department Stores. Ads for her stores in York indicate Isabel got into the greeting card business in 1919. This 1942 ad has The Christmas Card Girl opening a new location, 12 North Beaver Street; while noting “Specializing in Fine Greeting Cards for 23 Years.”

From its inception in 1923, Isabel Dromgold was heavily involved in the York Quota Club; a Woman’s club to promote friendliness among professional and business women in York. Within news articles about this club, Isabel is noted for her artistic ability; possibly she is also the creator of a line of greeting cards.

Such a line of greeting cards could have been sold by word of mouth, between 1919 and 1926. However from 1923 to 1926 is when Isabel had card stands in flower shops and department stores. After registering the business name “The Christmas Card Girl” in 1926, is when the separate stores sprung up and Isabel had employees running them. The first separate location was 141 West Market Street; this ad notes her store is open late on Christmas Eve during 1926.

On April 19, 1927, at St. Paul’s Lutheran Church, Isabel Dromgold married William A. Dice; a Department Store manager. They set up housekeeping in his home at 15 North Rockburn Street. Even after her marriage, the store ads continued to carry the Isabel Dromgold name.

If any of my readers have greeting cards marked “The Christmas Card Girl” or “Isabel Dromgold” send me an e-mail.

Links to past Christmas posts include: