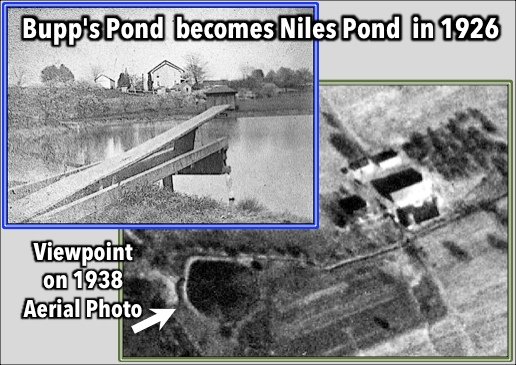 The pond at the headwaters of Poor House Run has a rich history from ice harvesting to immersion baptismal services. Thanks for the many Bupp’s Pond and Niles Pond comments received over the weekend, in response to my Saturday morning post: Baptismal Services in Niles Pond near Baumgardner’s Woods.

Bob Herman had done some Bupp family research. He was familiar with the pond at the headwaters of Poor House Run and e-mailed me the location on a 1908 Topographic Map. He knew it as Bupp’s Pond, because Charles W. Bupp was the owner of the farm, on which the pond was located. Bob also noted that farm was sold in 1926 to Michael S. Niles, per York County Deed Book 23M, Page 53; so a name change to Niles Pond made sense for my article quoted in: Baptismal Services in Niles Pond near Baumgardner’s Woods.

Ron Geesey shared some ice harvesting history about the pond where Poor House Run originates. “Before we had electric refrigerators, several of my farmer ancestors worked as ice harvesters during the winter months. They cut ice on ponds into blocks, which were stored in ice houses for distribution to ice box refrigerators throughout the year. The ice from ponds at the headwaters of streams had extra value, because it was the purest. I was told ice from the pond beyond Baumgartner’s Woods, at the headwaters of Poor House Run, was considered some of the purest natural ice in the York area.” I confirmed there are newspaper articles noting ice was harvested from Bupp’s Pond.

On Saturday, Chuck & Maureen Letocha walked in the area where I suggested Niles Pond might be located. They through it made better sense to be a little further south and Chuck verified that by looking at a 1937 aerial photo. He submitted the following photo, where he circled the pond in Red & the farmhouse in Orange. I labeled a few of the streets.

Tom Moore remembered walking to the end of Hillcrest Road, then making a left turn upon reaching the orchard. They followed a tree row along the field, to the pond that I was likely seeking. Tom relayed, at the time, houses were being built along Hillcrest Road. He noted it was the first road developed into the fields north of Queen Street at that area.

I decided to crop the July 4, 1947 aerial photo, to the same scale and area as the 1908 Topographic Map. Later in this post, that same area is compared to a present aerial photo to precisely pinpoint the location where the pond was once located.

Sharon Forry shared: “At a York Suburban football game, once my Grandma Kern sat next to me. I do not remember how my mom and grandma got on the subject of full immersion baptism. I do distinctly remember grandma pointing straight ahead and telling mom this whole area was farmland when she was immersed in a pond, just down the hill to be baptized as a teen. That might be the pond you are looking for.” We were able to narrow the years when that happened to her grandmother; as sometime in the 1920s. Searching Newspapers.com confirms that when Niles Pond was known as Bupp’s Pond, immersion baptisms also took place in that pond.

The following 2020 Google Aerial Photo shows the area south of Penn State Woods (the present name for Baumgardner’s Woods); this is exact area of 1908 and 1947 aerial photo illustrations. As such the precise location of the former Niles Pond can be indicated, via the BLUE DOT. Niles Pond was located where Crestlyn Road passes between Greendale and Hoffman Roads.

Michael S. Niles purchased the 80-acre farm from Charles W. Bupp, and his wife Jennie M. Bupp, on March 16, 1926. The metes and bounds in their deed, recorded in York County Deed Book 23M, Page 53, were plotted and are shown in yellow on the 2020 aerial photo. That positioning was done by first comparing the 80-acre farm in the 1947 aerial photo, to the deed plot; as shaded in subdued yellow on the 1947 aerial photo, where one sees how tree lines, and plowed field differences, match up with the deed plot boundaries of the farm.

Bob Herman indicates that prior to the Charles W. Bupp ownership of this 80-acre farm, it was the farm of Charles’ parents, Andrew & Elizabeth Bupp.