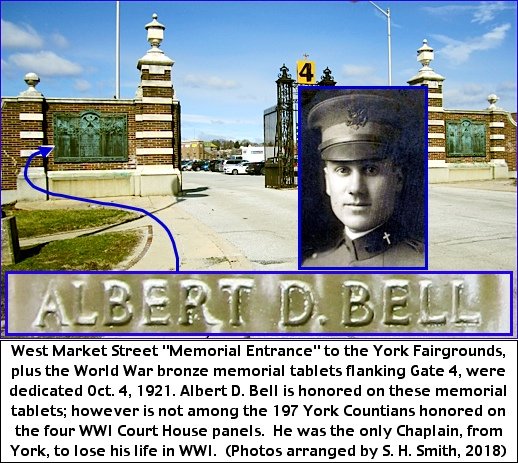 Albert D. Bell was the only army Chaplain from York to lose his life in the World War. That is the closing sentence in the memorial to Chaplain Albert D. Bell; appearing on page 120 of the book “York County and the World War 1914-1919” by Clifford J. Hall and John P. Lehn.

Albert D. Bell is another York County veteran, appearing on the WWI memorial tablets at the York Fairgrounds, however is not among the 197 York Countians honored on the World War I panels, fronting four columns, at the York County Administration Center, located at 28 East Market Street in York, PA.

After researching Rev. Albert D. Bell, I think he should be honored on the East Market Street panels. I provide the reasons why in this post.

Click on this LINK for a yorkblog.com Full View of the two original photos in this post if details are cut off in the cropping of photos, or if they have been removed from the ydr.com site.

Military records for Albert D. Bell document he was born December 27, 1885, in Newton, Iowa. Immediately I thought, definitely not a Yorker; that must be the reason his name was not included on the Court House WWI panels. I changed my mind, after delving into his family history.

Albert D. Bell is the son of Rev. Albert Bell [1855-1930]. Albert Bell, Sr. was born in Washington County, MD. His wife Elizabeth Cashman was born in Adams County, PA. Albert Bell, Sr. graduated in the Class of 1878 at Gettysburg College and in the Class of 1881 from the Lutheran Theological Seminary at Gettysburg. He married Elizabeth in 1882. His second pastorate, from 1884 to 1887, was in Newton, Iowa; where Albert Bell, Jr. was born. The full name of father and son is Albert Daniel Bell, however they seldom used Sr. and Jr., instead using Albert Bell and Albert D. Bell to differentiate.

All of Rev. Albert Bell’s remaining pastorates were in Pennsylvania. His longest pastorate, from 1894 until his retirement in 1926, was at St. Luke’s Evangelical Lutheran Church along East Maple Street, near South Duke Street in York, PA.

The subject of this blog, Albert D. Bell, grew up in York; from the age of 9 years old. He attended schooling in the city, graduating from York High and attending York County Academy, before following in his father’s footsteps at Gettysburg. Quoting the following article, in its entirety, which appeared in the January 31, 1918, issue of The York Daily:

“Rev. Albert D. Bell Called to Camp Dix as Lieutenant. The Rev. Albert Daniel Bell, formerly of this city, but lately residing at Orrtanna, Adams County, has received notice of his recommendation for commission as lieutenant for a chaplaincy in the regular army. He has received orders to report to Camp Dix, Wrightstown, N. J. He is a son of the Rev. Dr. Albert Bell, pastor of St. Luke’s Evangelical Lutheran Church of York.”

“The new lieutenant is a graduate of the York High School, and at one time was a student at the York County Academy. After being graduated from Pennsylvania College and Seminary at Gettysburg, he entered the ministry. His last charge was at Sparrows Point, Md. Lately he had been conducting a fruit farm at the Adams County town. He is a married man, and has a son and a daughter. His family will stay for the present at the home of his wife’s parents, Mr. and Mrs. C. C. Drum, at Gettysburg.”

“It had been the Rev. Mr. Bell’s desire for some time to enter the service in the capacity in which he has now been recommended for commission. He successfully passed examinations for his commission recently in Washington. He is above the draft age. He has preached a number of times in St. Luke’s Church.”

Information from multiple newspaper articles fill in the remaining details: After serving as pastor of the Lutheran Church in Sparrows Point, MD for six years, Rev. Albert D. Bell resigned in September 1916 after suffering from throat trouble for some time. He thought spending a year on the fruit farm of his father-in-law, above Orrtanna, Adams County, would give him ample chance to recuperate.

The WWI veterans of Sparrows Point, MD, in establishing a new post in 1919, named it “Chaplain Albert D. Bell Post, Veterans of Foreign Wars of the United States.” Chaplain Bell’s parents retired to Gettysburg in 1926; at which time they placed a memorial monument to son Albert within their burial plot in Evergreen Cemetery.

In York County, Albert D. Bell is honored on the Fairground tablets; containing the following words plus the names of those in York County who “gave their lives in defense of liberty, right and justice.” 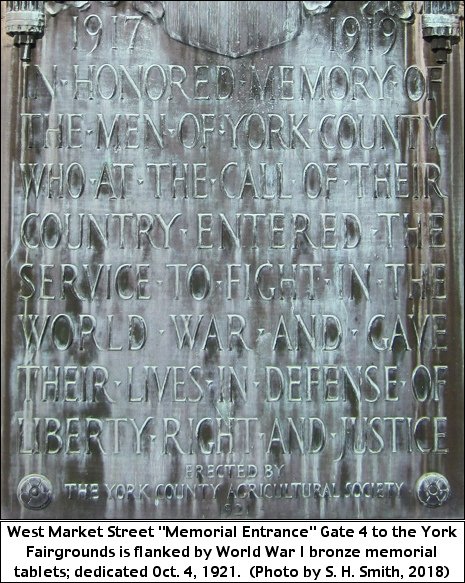 I think it would be a great tribute, to these veterans, by cleaning up these tablets; especially this year, since a great majority of them gave their lives during 1918.

Albert D. Bell spent the greater part of this life growing up in York, PA. Would you consider Albert a York Countian? I do, and thus believe he should also be honored; by having his name placed on the WWI tablets along East Market Street. Note: there are multiple empty spaces to do this on the existing plaques.