I was sorting some old trip photos recently and, when I saw photos of Luray Caverns in Virginia, it brought back a memory from my Cub Scout days. Initial meetings, for the Den I belonged to in the late 1950s, were held at a house near the north end of Eberts Lane in Springettsbury Township. An older gentleman occasionally showed up to tell stories. I remember him as a pretty good storyteller; with several stories about a nearby cavern from his youth. I decided to do some research to discover how much, if any, of those stories were fact and how much were fiction.

I was surprised, via two old newspaper articles discovered thus far, that there was some truth to his stories. It appears the physical details about the cavern were based upon an actual cavern in the township, while the characters in his stories were fictional in the style of Mark Twain’s adventures of Tom Sawyer.

An article in the August 21, 1915, issue of the York Daily provided extensive details about the discovery and description of a cavern in Springettsbury Township. This is the first of two articles, discovered thus far; the initial exploration went 50-ft into the cave and later in the year the caverns were explored to a length of 580-ft. This copy of the first paragraph of the initial article is followed by the text of the whole article. 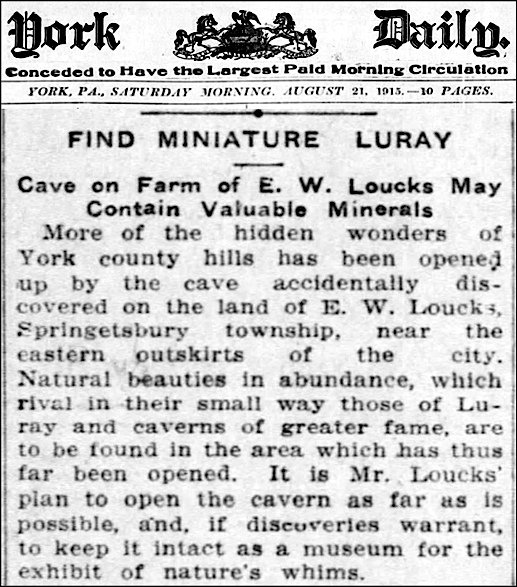 More of the hidden wonders of York county hills has been opened up by the cave accidentally discovered on the land of E. W. Loucks, Springettsbury township, near the eastern outskirts of the city. Natural beauties in abundance, which rival in their small way those of Luray and caverns of greater fame, are to be found in the area which has thus far been opened. It is Mr. Loucks’ plan to open the cavern as far as is possible, and , if discoveries warrant, to keep it intact as a museum for the exhibit of nature’s whims.

To a representative of The Daily was accorded the privilege of exploring the cave with Mr. Loucks. To reach the main entrance, which opens directly west into the cavern, steps lead down a distance of about six feet. Branching off from the main hall are two avenues running north and southwest which are passable, while leading out in various other directions are numerous smaller tunnels choked by the years’ accumulation of sand.

Standing out prominently in the reception hall, which extends back from the main entrance a distance of about 36 feet, is a table, in support of which nature has fashioned an elephant head, while action of the water along its sides has produced a peculiar and beautiful formation of stone. The entire cave is carved from limestone, which when recently analyzed, Mr. Loucks told The Dispatch reporter, proved of the highest grade. It has been opened a distance of about 50 feet.

Another figure in the reception hall which strikes the eye, is that of a hog, which is remarkably complete in every detail. Here, too, the stone has been transformed, and in general appearance resembles marble. The figure has a white ring about its neck.

Looking out into the small passageways which lead off from the main entrance, thousands of stalactites, large and small, can be seen, while from the uneven floor protrude numerous stalagmites. The roof of the cavern has been washed smooth by the small stream which trickles through the rock, and its sides are as carefully rounded as though they were the handiwork of a master builder. A shaft of light shows an entrance in the southern extremity a hundred feet or more from the reception hall, but the other passages extend as far as the eye can reach in the gloom.

The existence of the cavern was discovered about five weeks ago, while Benjamin Minnich was employed in digging out building stone for Mr. Loucks. Finding his digging iron extended as far as he could reach, he called the owner of the property and revealed to him the possibility of a cave lying buried under foot. Since then Mr. Loucks has had Minnich and his sons at work tunneling into the cavern. Stones of various grotesque shapes have been removed and are being stored in an abandoned building on the Wrightsville turnpike, at the end of the East Market street trolley car line. Among them are figures resembling a woman’s head, a rabbit, birds and various other animals.

Clay of peculiar character is now being removed. It is of extraordinary color and shows the existence of oil. With the first lot, Minnich painted an Indian’s head on the wall of rock, at the entrance. The tracing is similar to that which might have been done with a huge indelible pencil. Recent storms have failed to erase it.

That there is possibility of coming across a vein of lead during the tunneling, is the opinion of Mr. Loucks. Quartz, which seems to bear trace of lead, has been removed, but has not yet been analyzed. Mr. Loucks bases his theory of the existence of a lead vein upon the fact that a quantity was discovered in that vicinity some time ago, which, when analyzed by a Baltimore chemist, proved 95 per cent pure.

The work of exploration has received somewhat of a setback by the rains of the past several weeks, which flooded the floor. Until then, however, water has caused no trouble in the operations. An order from Mr. Loucks, will be necessary to visit the cavern. It is being guarded at present to avoid destruction of its natural beauties.

Follow-up posts will publish additional articles reporting on further exploration of this cavern. The second article, to be posted next week, provided the first clue where the cavern was located, quoting: “the cave which has been discovered on the Loucks’ farm east of York. This cave is located within a short walk of the Lincoln highway.” If any of my readers know anything about the location of this cavern, please contact me, otherwise I’ll start to research deeds of Edward (Edwin) W. Loucks, who owned several farms within Springettsbury Township. One of his farms north of the city is where the Rankin Treasure was supposedly buried. A farm east of the city is where the cavern was located; stay tuned for follow-up posts with more details.