The York County History Center Collection contains a neat group photo of hundreds of York Manufacturing Company employees; which was tentatively dated circa 1895. On the back is a label for Swords Bros. Photographers, 25 West Market Street, York, PA. This post pinpoints February 3rd, 1902, as the date the

William Reed submitted several photos of the first Jeep undergoing testing at the Army’s Holabird Motor Transport Depot in Baltimore, and shared an inadvertent connection his father, Bill, had with that testing. The body portion, for driver and passengers, of the first Jeeps ever made were fabricated at the York-Hoover

Thirteen decades ago the village of Pleasureville was bustling with 17 thriving businesses. One of those businesses was the E. G. Keller store, already well on its way at being operated for 52-years by founder Emanuel G. Keller. He was one of seven businessmen that met to start the ball 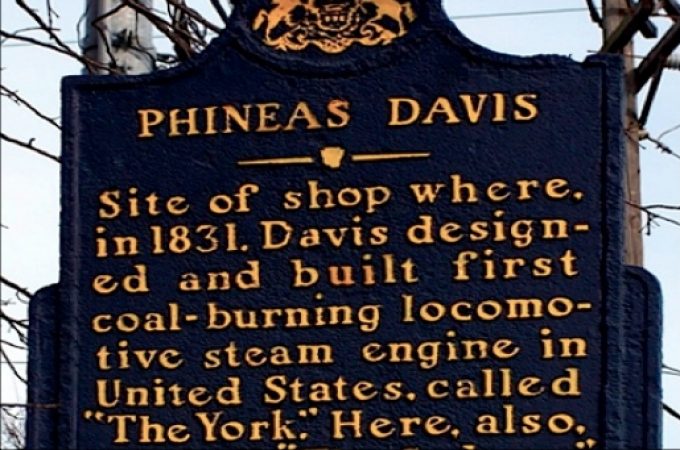 “Clockmaker began York’s Railroad Heritage” is the title of a Phineas Davis talk, which has been presented seven times. Comments following each talk always resulted in additional research, which has continually fine-tuned the story. Suggested additions were also made; such as the story of black machinist William Wood, who worked

The rest of the story about Gotwalt’s Mill, at the S-curve in Camp Betty Washington Road, is told in this post. This mill is also referred to as Rider’s Mill and more commonly Bowser’s Cider Mill. The Olde Mill Cabinet Shoppe presently occupies this old mill structure in York Township.

Don Farr submitted a photo of a bell manufactured by Baugher & Bro., of York, PA. The manufacture of bells was a specialized foundry trade and research suggests 150-years-ago Baugher & Bro. might be the first York County foundry to produce bells. The bell has a mouth diameter of 19-inches

I’ll share stories about the Barshinger Family of Barshinger’s Mill at a meeting of the Red Lion Area Historical Society on October 28, 2021. The presentation will take place at St. John’s UCC at 7:00 p.m.; enter into the rear of the church, off of the rear parking lot. Address

Abraham Pfeiffer established Pfeiffer’s Brewery in York, Pennsylvania, during 1857. Pfeiffer’s could be the first of a string of breweries located at the northwest corner of King and Queen Streets. At the onset the Civil War, Pfeiffer’s brewery operations were moved to Violet Hill, along the Baltimore Pike in Spring

Henry Ford motored to York on the Lincoln Highway in 1929

Dan Trimmer inquired about a story often shared by an uncle; who, while working at the York Motor Company in 1929, claimed to have repaired a flat tire on the car of Henry Ford. Newspaper reports do place Henry Ford in York County, Pennsylvania, on June 7, 1929; where he visited several places, including the York Motor Company. In June of 1929, Henry Ford was on an automobile journey across Pennsylvania; from east to west, primarily on the Lincoln Highway.