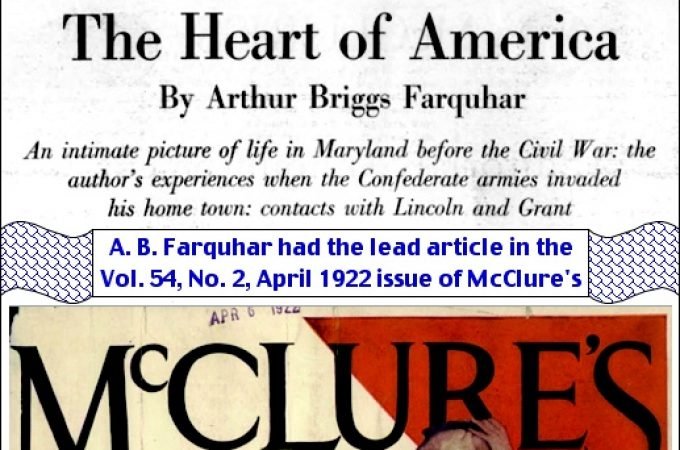 Arthur Farquhar recalled his capture by President Abraham Lincoln in the April 1922 issue of McClure’s magazine; a monthly publication sold widely throughout the United States. York industrialist Arthur B. Farquhar was 24-years old when he initiated actions that resulted in the surrender of the Borough of York to thirty

I received an unexpected reaction to last weeks post: General Gordon napped at 3103 East Market Street. This post answers that inquiry and also provides additional details about Albert Smyser’s prized horse; stolen by the confederate troops when they invaded York County during 1863. A reader inquired why the house

In 2015, Helen Rinehart responded to my post The Famed Twin Barns along Mt. Rose Avenue.  Helen was certain her sister Karen took close-up color photos of the decorative barns before they were torn down in 1965. This week I heard back from Helen, with an apology, she wrote, “My

How a mile long river bridge was built in 21 days

This photo of the mile long steel railroad bridge over the Susquehanna River, linking Wrightsville and Columbia, is believed to include some of the workmen that erected the bridge in 21 working days during 1897. The Pennsylvania Railroad used the divide and conquer method to accelerate bridge construction. The railroad

Today the Soldiers and Sailors Monument stands at a prominent place in York’s Penn Common, however in the early morning darkness of Saturday September 16th, 1876, three monster trains, containing 120 railroad cars, pulled into York, Pennsylvania. They occupied one of the double tracked rails of the Northern Central Railroad,

Following the Wednesday evening Unraveling York County History ‘Heroes and Villains’ event, at Wyndridge Farm, I was questioned how I knew Adam F. Geesey was an owner of the Eagle Hotel in Dallastown, since that fact is not noted in either York County History. I did not have the source

Near the beginning of every month, I’m sharing with my readers the top 10 posts from the previous month. This single graphic, features illustrations from all top 10 posts; however giving greater space to the higher ranked posts. If you are reading this on the Ydr.com site, click on this

An announcement for “A Bean Soup” appeared in the October 7, 1896, issue of The Semi-Weekly Gazette in York, PA. The General Sherman Post, No. 602, of the Grand Army of the Republic, an organization of Civil War veterans, announced they “will hold a camp fire and bean soup at