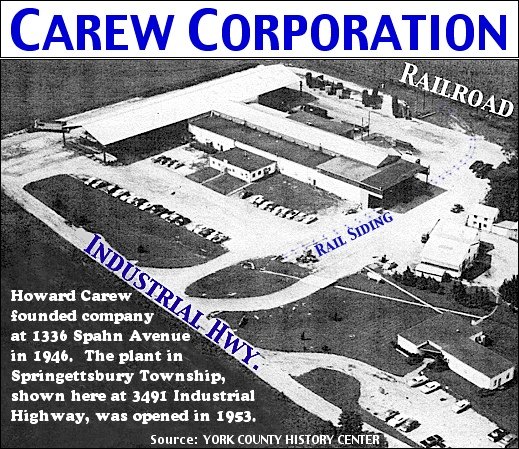 Howard J. Carew was one of the 13-founding-members of the Metal Building Manufacturers Association (MBMA). Howard took an active role in that national organization; serving as its leader in 1961. He also served on the Technical Committee for many years. The MBMA metal building systems design manual helped lead to the recognition and acceptance of metal building systems; which remain prevalent today.

The Carew Corporation plant was located at the eastern end of Industrial Highway in Springettsbury Township. I’ve annotated a circa 1955 northwestward aerial view from the collections of the York County History Center. Click on this LINK for a Full View of the illustration in this post if details are cut off in the cropping of illustration.

Tom Landis contacted me in October. He wanted to know the story about the Quonset huts that were part of the York-Shipley plant in Springettsbury Township. He also commented “I’ve seen your talk on the Top 50 York County Manufacturers in 1899. How about selecting the top Springettsbury Township manufacturers and write about them?” I’d been considering that, and so, with this post I begin a new YorksPast series.

Howard Joseph Carew was born in 1911. He graduated from Princeton University in 1933 and served in the U.S. Navy from 1941 until 1946. Howard immediately established a York County business during 1946. The initial plant was located at 1336 Spahn Avenue in Spring Garden Township, York County, PA. In a 1948 interview, Howard stated, “Five categories of steel structures are now being fabricated in the Carew plant. These are: steel framing for all types of buildings, standard truss roof buildings, steel roofs, steel trusses, and the well-known Quonset type of building.”

Carew supplied the Quonset huts at York-Shipley and for the US Naval Reserve in Springettsbury Township. The Quonset huts were a very brief part of their business and as sales of their new types of metal buildings took off, Howard moved the business to an 18-acre site, which allowed construction of a rail siding. In 1953, they moved into that new plant, which is now numbered 3491 Industrial Highway, in Springettsbury Township. The equipment within the 50,000-square-feet fabrication plant was recognized as the finest and most modern in the country.

The Carew plant employed two shifts of over 100-workers. Carew system buildings predominantly appear in states East of the Mississippi, however they were also shipped further west and abroad. Carew buildings are as close as the nearby Caterpillar Tractor plant, and a varied as the 6000-seat Stabler Arena at Lehigh University.

In 1982, the second-generation management decided to discontinue manufacturing operations. A public auction of all equipment within the Carew plant was held on February 11, 1982. The plant, on 6-acres, is still utilized as one of the buildings within Highland Industrial Park.

Links to other Springettsbury Township manufacturers and related posts: