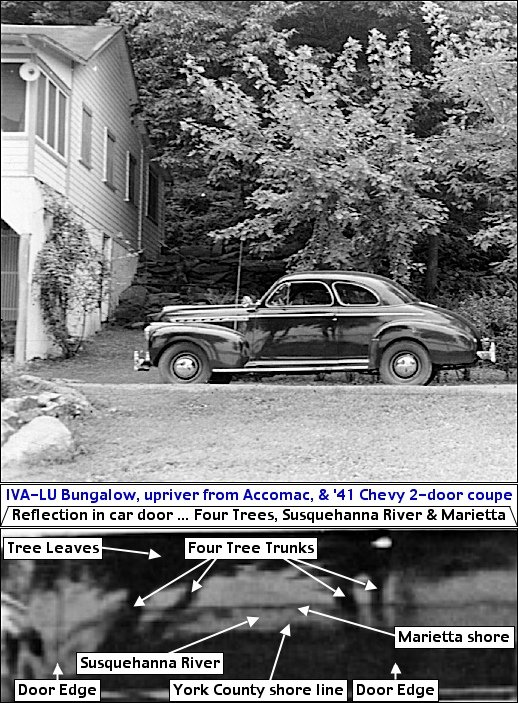 The IVA-LU Bungalow was built in 1930 and was named for my grandparents Iva and Luther Smith. In the past ten days, I’ve received numerous comments about the Smith bungalow, which was located along the Susquehanna River, 5/8-mile west of Accomac. The circa 1947 photo of the west side of the IVA-LU, with the ’41 Chevy 2-door coupe sitting on the river road, figures into a conversation I had with Cheryl Price.

The ’41 Chevy was my Dad’s car and that photo was one of his favorites. Besides the car, he liked the way the view looking across the river towards the Marietta shore reflected in the car door. The reflection clearly shows the four very tall trees, between the road and the river that framed that view. Click on this LINK for a Full View of the illustration in this post if details are cut off in the cropping of illustration.

Cheryl Price remembered her family vacationing for a week at the IVA-LU during two years in the late 1940s. I know the bungalow was occasionally rented out from Monday through Friday; which freed up the IVA-LU for Smith family use over weekends.

Cheryl said a young couple from the owner’s family always stopped by Friday night to get a head start on the family gathering over the weekend. As she described the couple, I became convinced she was describing my parents. The clincher was when Cheryl described some of the stories her father and the guy always sharing; from the time they worked for the Pennsylvania Railroad. Cheryl confirmed my suspicion after I shared 1940s photos of my Dad and Mom, Harold & Esther Smith, which appear in the linked blog posts.

Cheryl indicated she got along really great with my Mom, and that my Dad and her Dad were always sharing railroad stories, although she recalled that her father also always bugged my Dad about buying his car. Cheryl was not certain if her Dad purchased that car; however if not, she was convinced her father bought one nearly like it. She asked if I had a photo of that car; to which I replied, “Yes, I’ll post it.”

Links for posts related to IVA-LU Bungalow and to Dad’s working for the Pennsylvania Railroad (PRR):