Car Building in York County during 1876

These snippets, from an article in the October 10th, 1876 issue of the The Evening Dispatch, paint an optimistic picture for railroad car building companies within York County.  The snippets are from the extensive collection of newspaper microfilms at the York County Heritage Trust. 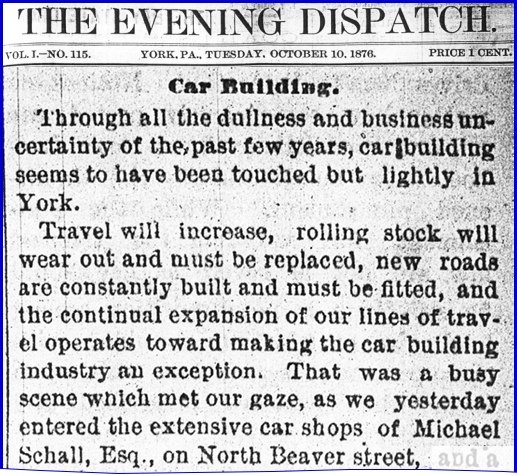 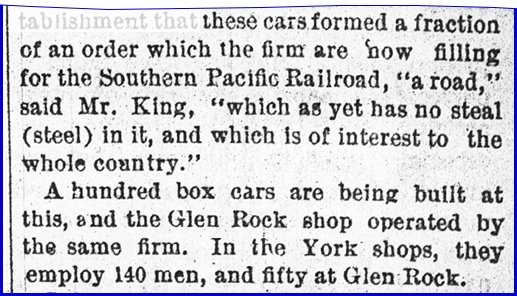 I’m giving a talk on Rail Events in the 1800’s for the Glen Rock Historic Preservation Society on April 22nd, 2014.  What started out as changing a few slides to a previous talk on “19th Century Railway Car Builders of York” has essentially morphed into a completely new talk.

It is no doubt; the 1870s and 1880s were boom years for Railway Car Builders in York County.  My “19th Century talk” focused heavily on Billmeyer & Small Company, who reached a peak of nearly 700 employees in 1883 at their two big car building plants in the east side of York.  Right now I’m writing about Billmeyer & Small’s export business in the latest chapter of Railcar Gold.

Michael Schall’s Empire Car Works was located in the west side of York; within what is now known as the northwest triangle.  The October 10th, 1876 article in the The Evening Dispatch is from a reporters visit to the Empire Car Works, reporting on a large railcar order for the Southern Pacific Railroad.

Years ago, when searching newspapers for Billmeyer & Small information, I occasionally ran across articles about Michael Schall getting big orders; which his York plant alone could not fill.  In which case, he’d farm out the excess to other car shops where he was a partner.  Through this arrangement, Fry, Herbst & Company in Glen Rock produced cars for the Southern Pacific Railroad.

In the article, Arthur King, the superintendent of the Empire Car Works, noted the Southern Pacific Railroad “as yet has no steel in it.”  This is a reference to no steel railcars.  In 1876, over 99% of the railcars in the United States were constructed of wood.  Some railroads had a few steel cars, although these were more of a curiosity, since they were an order of magnitude more expensive than wooden rail cars.

P. T. Barnum exploited the steel rail car in the Centennial edition of his Greatest Show on Earth.  In the early morning darkness of Saturday September 16th, 1876, Barnum’s ad noted, “Three Monster Special Trains of Solid Steel Cars,” pulled into York, Pennsylvania.  These 120 steel railroad cars, transporting the biggest traveling circus ever assembled, must have been a sight to behold in 1876.

By 1883, the steel railcar had dropped to roughly four times the cost as the equivalent wooden railcar.  The cost of steel railcars continued to drop through the 1890s, until by the early 1900s most wooden railcar builders ceased production, as was the case with Billmeyer & Small Company. 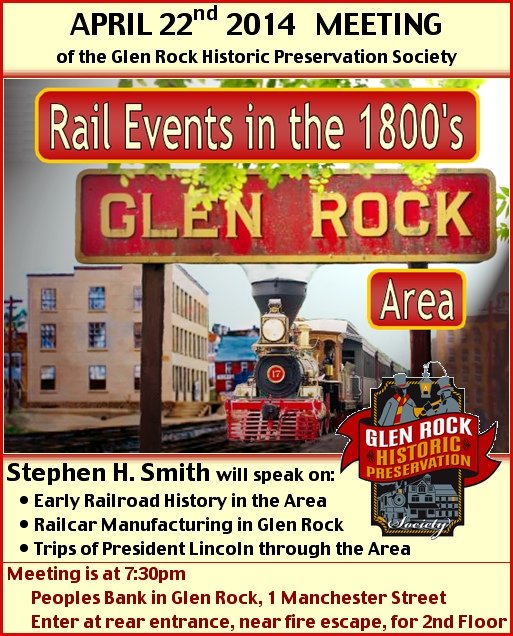