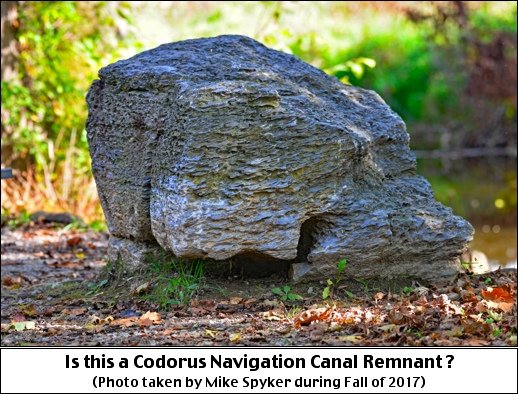 In part two of this series, I’ll explore the design details of the Codorus Navigation canal.

Mike Spyker offered to provide the photographs that will be used in this series. This photo was taken along the Rail Trail, a short walk north of the Emig Road parking lot in Manchester Township; with the Codorus Creek shown in the immediate background. Is this rock a Codorus Navigation Canal remnant? These types of rocks, of various sizes, are scattered along the creek banks in the vicinity of where a dam and a lock were located on that canal system. Click on this LINK for a yorkblog.com Full View of the original photo in this post if details are cut off in the cropping of photo, or if it has been removed from the ydr.com site.

The Managers of the Codorus Navigation Company hired Simeon Guilford as their canal engineer. Simeon had years of canal design experience throughout Pennsylvania and had received several United States Patents in 1826 for improvements in the construction of canal locks.

It was December of 1829 before the first design details were made public; initially in York newspapers, although quickly the news was picked up by newspapers in surrounding communities. This is how the December 30, 1829 issue of The Adams Sentinel (Gettysburg, PA) presented the earliest design details about the Codorus Navigation Canal:

“The President and Managers of the Codorus Navigation Company have received from Mr. Guilford, a plan which proposes ten dams and thirteen locks, with short canals at certain designated points. Louck’s dam would be removed; and another substituted at the present head of the millpond, to supply with water a canal cut thence to the mill. The dams at Weidner’s, Meyer’s, and Brillinger’s, are to be retained and severally raised.”

“In the Narrows, between Brillinger’s mill and Codorus forge, four dams will have to be erected—The first of these will be twenty-one feet high, requiring three locks of seven feet each to overcome a fall. The next three dams will overcome a fall of thirty-six feet, six inches. The forge dam will not be raised, and to pass it, the construction of crib work, on the north side of the stream and within it, is recommended. At the outlet a canal will be required along the shore of the Susquehanna to the still water above Chestnut ripples, at the mouth of the Codorus.”

“All the dams, excepting the first below York, will rest on rock foundations. The total length of the several short canals comtemplated, is two miles and three fourths. The cost of the improvement, as estimated by Mr. Guilford, at the present rate of wages and price of materials, would be $84,850—which sum is regarded by him as amply sufficient to complete the work in the best manner. It is generally believed that if the contracts be judiciously given out, a much smaller sum would suffice.”

Throughout 1830, more design details came to light through additional newspaper articles and via requests for quotations to contractors; to build the canal and everything related to putting it into service. The locks measured 95-feet long by 18-feet wide. In addition to the 10 dams and 13 locks, 2 guard locks were planned to regulate the desired water level in the canal near the Susquehanna River and near what is now known as Mill Creek.

The total lockage elevation change between the Susquehanna River and York was given as about 102-feet. The total length of the navigational part of canal was given as 11-miles, 265-perches; which totals 62,452-feet. The canal extended into the borough of York to the point where the southern boundary crossed the creek. In 1830, that boundary point on the Codorus was just east of the present South Penn Street bridge.

Besides the towpath construction, several bridges would have to be raised to accommodate canal boats passing under them; at least four road bridges were involved. Nine farms, along the canal route, had previously relied on fording the generally shallow Codorus Creek to get to their other fields on the opposite side of the creek. With canals normally at least 4-feet deep; up to nine farm bridges had to be constructed.

None of Simeon Guilford’s drawings of the Codorus Navigation canal appear to have survived. The design details, gleaned from old newspapers, court cases and the like, will be explained in greater detail as I use them in future posts. My plan is to combine the design details with government topography data and old map information to reconstruct a profile and plan of the Codorus Canal.

Links to other Codorus Creek related posts include: