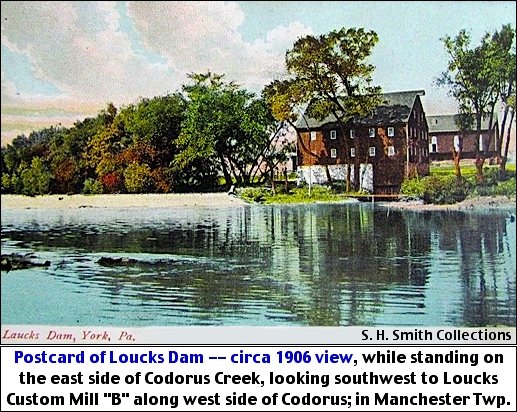 Part four explores the nine-tenths of a mile long canal cut; located just north of York. Information within agreements, and lawsuits, between mill owner George Loucks and the Codorus Navigation Company provide key insights into the specifics of this canal cut and the canal dams at both ends.

The postcard, at the beginning of this post, is a circa 1906 view, while standing on the east side of Codorus Creek, looking southwest towards Loucks Custom Mill “B” along the west side of Codorus Creek, in Manchester Township. However in 1830s this was the location of Michael Weidner’s Forge; which utilized a waterwheel to power forge bellows and trip hammers, by the water flowing from Weidner’s Dam, shown at the left side of the postcard.

Here is an interesting fact about this postcard. The barn in the background of this postcard now houses San Carlos Restaurant, which opened in the barn during 1962. Details are provided later in this post.

Besides the postcard, I’ve included annotated 1894 and 1903 maps that provide neat insight into the canal cut and the canal dams at both ends. Click on this LINK for a yorkblog.com Full View of the three original illustrations in this post if details are cut off in the cropping of illustrations, or if they have been removed from the ydr.com site.

I’ve annotated a 1894 Sanborn-Perris Map page containing Loucks Custom Mill “B” on the west side of the Codorus Creek. I’ve added an arrow to show the general direction of the postcard view. The dam went diagonally across the creek, as shown in the Sanborn Map and confirmed on 1937 aerial photos, that show diagonal ripples where the dam had been. The yellow buildings indicate they are primarily of frame construction, however the Mill and Barn both contain the note that first level is stone. The mill building, right on creek’s edge, was destroyed in the flood of 1933. 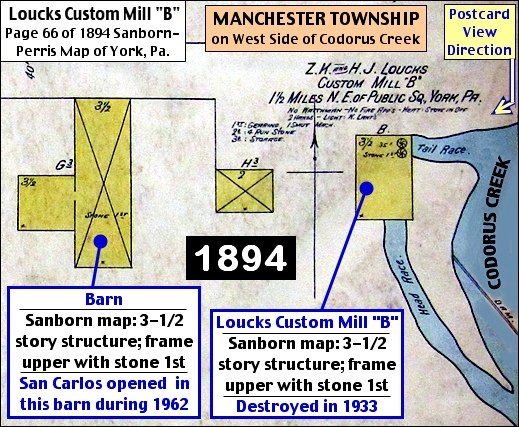 I’ve annotated a Library of Congress color version of the 1903 Fred’k B. Roe Map of York, PA. In 1903, the nine-tenths of a mile long canal cut, located just north of York, had long since been relegated to the sole purpose of functioning as the head race for Loucks Mill. However descriptions of Dam No. 1 and the canal cut mirror its placement in on the 1903 map. It is the best map I’ve found to illustrate the section of the Codorus Navigation Canal immediately north of York. 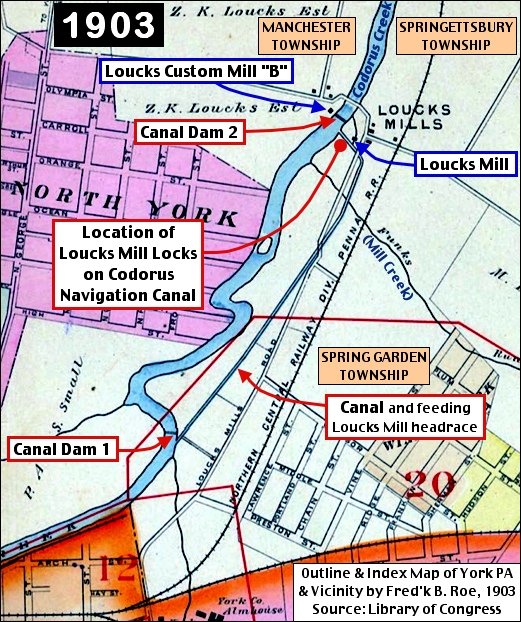 Next week, in Part 5, based upon everything I’ve dug up on the Codorus Canal, I’ll provide a sketch of what the two Loucks Mill canal locks might have looked like. That will be followed by the continuing series of weekly posts as I continue working my way down the Codorus Naviagtion Canal to the Susquehanna River.