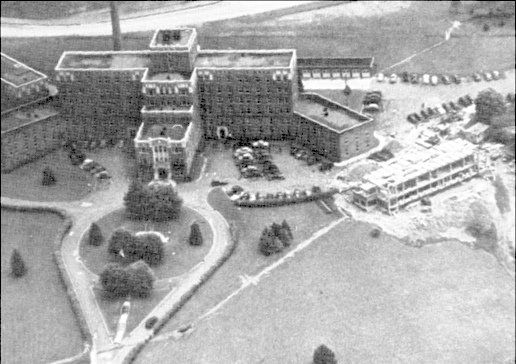 In November of 1948 the Campbell Isolation Hospital opened next to the York Hospital for treating patients suffering from a wide variety of communicable diseases. This 1948 aerial photo shows the self-contained two-story Isolation Hospital under constructed next to the York Hospital, on the South George Street hillside; i.e. the light-shaded building to the right side of the photograph.

Norma Thompson shared the photos, memories and comments her mother had about the Isolation Hospital. “With memories of the Spanish Flu epidemic still fresh, a need for a permanent Isolation Hospital was proposed by the York community as early as the 30s. However the idea floundered, owing to disagreements on how much the government should contribute. In the 40s the decision, place it next to the York Hospital. After more bickering, that is where it was built at last.”

I discovered it was the local polio outbreaks in the mid-1940s that hastened the decision to construct the Isolation Hospital. The York Dispatch published an Editorial about the Isolation Hospital on June 15, 1949. “There is no longer necessity to get approval from one of the county commissioners to transport a stricken child [with polio] from here to Harrisburg for hospitalization, as was the horse-and-buggy procedure before the local isolation hospital was built.”

The Editorial concluded: “Removed from the field of politics and administered by a representative group of citizens, the Campbell Wing today stands ready to give such services as may become necessary in a health emergency. It is undoubtedly one of the finest examples of this type of institution and, unquestionably, our community feels proud of it and grateful to its donors.”

Quoting several paragraphs from the formal opening on November 24, 1948; within The Gazette and Daily of November 26, 1948: “Judge Harvey A. Gross said Wednesday afternoon at the dedication of George J. Campbell Isolation Hospital, ‘This is one of the finest things that has happened in the city of York since I have known it.’ Approximately 100 persons—members of the Campbell family, their friends, doctors, nurses and public officials—attended the ceremony.”

“Principal feature is just what the name implies—isolation. The doors will be locked. Visitors will not be allowed inside, once the unit is placed in use. Nurses and doctors who must enter will do so by the front door. Once inside they will step into small washrooms and change their clothes. Before leaving the building they will change their clothes again. The wash rooms are equipped with showers.”

“Patients will be brought into the building by means of a ramp at the north end. Nearby is an elevator that could carry a patient on a litter down a few feet to the ground floor where the operating room is located. The hospital contains such modern devices as germicidal lights, which kill airborne bacteria, and spark-proof electric light switches.”

The York Daily Record concludes “Construction for the education center and auditorium began in November, 1970, and the building was occupied by the School of Nursing in December, 1972.” Therefore the “Last days of the Isolation Hospital” photo can be dated circa early 1970.

Who were the Campbell benefactors?

In 1902, George J. Campbell got his start in the chain business in his hometown of Philadelphia. Years later, in 1919, George became the Philadelphia area sales agent for a start-up chain company in York, PA; the Victory Chain and Manufacturing Company.

Victory Chain was a cooperative venture by a group of twenty-five York men who manufactured fire-welded chain in a small factory at the corner of Norway and Elm Streets. Initially business was good; they produced approximately 18,000 pounds of chain per week. However significant financial difficulties arose in 1922.

George Campbell saw potential in their chain making operation, he moved to York and acquired sole ownership of the business; renaming it the International Chain and Manufacturing Company. That business saw steady growth and by 1940 the number of employees had increased to 175. After George J. Campbell died in 1941, all his sons continued to operate the business until their retirements.

The International Chain and Manufacturing Company produced significant quantities of standard and specialty chain for all branches of the military during WWII. International Chain is listed among the nineteen York County war production plants granted the Army-Navy “E” Award during World War II. The presentation ceremonies to the 300 employees of the company took place May 20, 1944 in the William Penn Senior High School Auditorium.

In 1949 the name of the company was changed to Campbell Chain Company. To add to the manufacturing capacity of their York factory on Norway Street, at the Maryland & Pennsylvania Railroad, Campbell Chain expanded across the United States; opening a West Burlington, Iowa, plant in 1951 and a Union City, California, plant in 1957. In 1968, the Headquarters plant in York, moved to a new facility, with room to grow, at 3990 East Market Street in Springettsbury Township.

A 1937 Aerial photo of the York Hospital is within the post at this link.