Camp Security was built on part of the 280-acre Daniel Brubaker farm that existed east of York Town in what is now Springettsbury Township, York County, Pennsylvania.  The first British prisoners arrived in the summer of 1781 from General Burgoyne troops that surrendered years earlier at Saratoga, New York.  General Lord Cornwallis’ troops, captured at Yorktown, Virginia in fall of 1781, were the next to arrive.  Up to 2,000 enemy soldiers were detained in this Revolutionary War prisoner-of-war-camp.

At the beginning of this post, Daniel Brubaker’s 280-acre farm and the 173-acres presently in the hands of Springettsbury Township are shown plotted on a 1908 Surveyed Topographic Map.  The 173-acres includes the 11-acre Camp Security Township Park along Eastern Boulevard.  Spearheaded by the Friends of Camp Security, these 173-acres are preserved from development and will allow interpretation of this last surviving undeveloped site that contained a Revolutionary War prisoner-of-war camp. 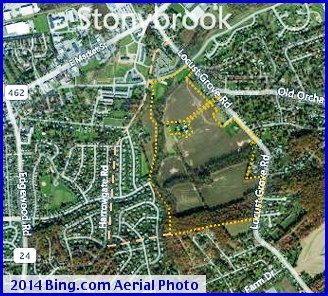 The extent of the Daniel Brubaker farm is shown by the tan dashed lines and Locust Grove Road on this 2014 Bing.com aerial photo.  Documents indicate that Camp Security was located on a hillside somewhere within the 280-acre farm of Daniel Brubaker.  The plot of the 280-acres, as they existed in 1781, was done using metes and bounds from the 1765 survey of 200-acres for John Shultz and the 1769 warrant of 80-acres to John Shultz; these 80-acres later surveyed as 77.12 acres.

As time progressed, some of the prisoners were permitted to move outside of the Camp Security stockade into huts with families that accompanied some of the British soldiers; this became Camp Indulgence. A fever epidemic spread through the camps during the winter of 1782/1783.  Hundreds of prisoners died, including women and children, and were buried in an unmarked Graveyard near the camp.  See related post: Camp Security, the Schultz House & Henry Ford. 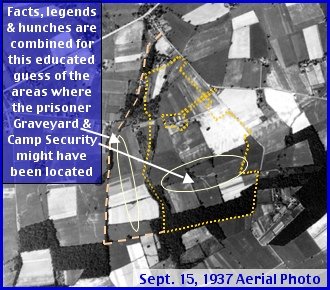 A recent belief is that the unmarked Graveyard may be located someplace west of Camp Security; i.e. within already developed land.  Hopefully archaeological research within the 173-protected-acres proves otherwise, so that the Graveyard can be properly protected and commemorated.  Combining facts, legends and hunches, I’d place Camp Security starting at the first tree line and going uphill.  I think most of Camp Security was located in an area that is presently a stand of trees that sprouted after 1937.

The prisoners were freed in the spring of 1783 per preliminary agreements to the Treaty of Paris; which was signed in September of 1783, formerly ending the 8-year American Revolutionary War.  The camps were dismantled.  The stockade logs & hut wood were used for other purposes and the site of the camps returned to agricultural use. 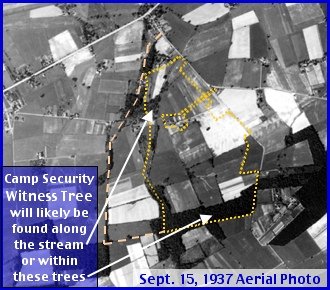 Witness Trees provide a living link to the past and gave witness to the surrounding events during their lifetime.  Nationwide, Witness Trees are recognized by civic groups, local & state governments and the National Park Service because they serve as silent sentinels of our heritage; connecting people, history, and places.