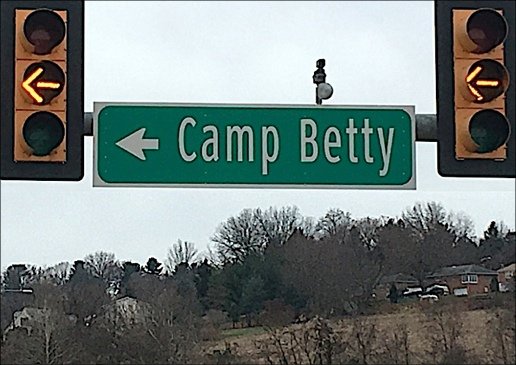 Eric Lehman noticed the Mt. Rose Interchange sign to Camp Betty asked, “Are the rumors true, of why the Camp Betty Washington Road sign was shortened to just Camp Betty?”

In driving south on Haines Road, from Mount Rose Avenue; at the new I-83 interchange, one can either turn right to enter the on-ramp to head north on I-83, or wait at these stop lights, to turn left and continue along Haines Road in Springettsbury Township, which becomes Camp Betty Washington Road in York Township.

A Girls’ Friendly camp, located at Burnt Cabin in the river hills of Hellam Township, was forced to relocate because they were polluting Wild Cat Run; which filled the main reservoir for the Marietta Gravity Water Company. Neville Smith became their benefactor, by procuring a site to relocate the camp in 1928. Neville Smith named the new camp to honor Betty Washington, the sister of George Washington.

Fully understanding the naming of Camp Betty Washington Road came about years ago during a visit to the Genealogical Reading Room at the Library of Congress. A book on Washington Family descendants included a Stephen Smith entry. This was Stephen Fahs Smith, although he often went by just S. Fahs Smith, as a son of S. Morgan Smith. S. Fahs Smith was Vice President of the S. Morgan Smith Company from 1896 until 1936, and President of the company from 1936 until 1942.

The following is John Wollaston’s painting of Betty (Washington) Lewis [1733-1797]; done shortly after her marriage to Fielding Lewis. Betty is the only sister of President George Washington to live into adulthood.

Details that tie together the naming of Camp Betty Washington come from property Deed Book 24H, Page 196, made October 18, 1928. In that deed, Neville Mitchell Smith conveyed four plots of land, totaling 8.9-acres, to the Girls Friendly Society of the Diocese of Harrisburg, as a Girls’ Camp and Holiday House. Two acres of land are on the west side of Mill Creek, then known as the Little Codorus Creek, and is mainly in Spring Garden Township, but also runs south just into York Township. The remaining 6.9-acres of land are on the east side of Mill Creek in Springettsbury Township.

The following terrain map points to the location of Camp Betty Washington; i.e. where the boundaries of Springettsbury, Spring Garden and York Townships meet. The camp was on both sides of the road; in the vicinity of the present neighboring properties at: 1351 Haines Road in Springettsbury Township and 1353 Camp Betty Washington Road in York Township.

At the south end of the road, the York Township road sign spells out the full name, Camp Betty Washington Rd.; as it ends at Springwood Rd.

After Eric Lehman noticed the sign to Camp Betty at the Mt. Rose Interchange, he asked three friends and heard these varying explanations of why the State chose to use just a Camp Betty sign at that location:

[1] Camp Betty Washington Rd. has too many characters to fit on a road sign. (However, York Township managed to do it on their road sign.)

[2] With all the cost overruns at that interchange, the shorter sign is a cost-saving item; the State can boast about.

[3] In pointing to the no longer existent Camp Betty, the confusion of which of the two road names in that direction the arrows are pointing too; i.e. Haines Road or Camp Betty Washington Road.