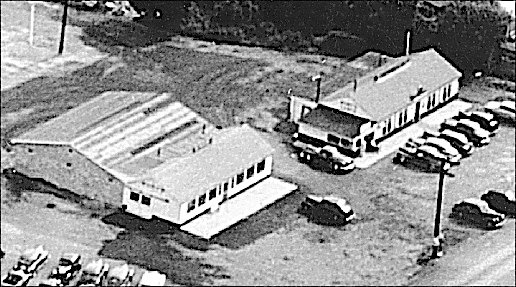 Between Bury’s Restaurant and neighboring Playland which opened first along the Lincoln Highway in Springettsbury Township? That stumped me; so I told the group to check a future YorksPast post for the answer.

However the ensuing discussion, with an audience last week, included a comment indicating Bury’s had at least two locations outside York County. That was the first I heard about that aspect of Bury’s service area.

During the Bury’s exchange, I asked if anyone had interior photos of the Bury’s next to Playland. Paraphrasing what a gentleman offered: “You might want to check some of the Bury’s up to the north. As a young boy I went along with Dad on his delivery route. The Bury’s, in New Cumberland, was a regular lunch stop during his Harrisburg area deliveries. I remember the interior of that Bury’s was identical to the interior of the Playland Bury’s, where our family often ate. I kind of recall my Dad saying he also stopped for lunch at another Bury’s, located north of Harrisburg.”

A Harrisburg newspaper, the Harrisburg Telegraph, covered the opening of Bury’s Restaurant in New Cumberland, within their January 3, 1941 issue. Two photos of Bury’s, located at Front and Bridge Streets, appear in that issue.

This exterior photo, of a portion of the building, features a “BURY’S FAMOUS HAMBURGERS” sign across the crest of the roof and a “Bury’s Dining Room” neon sign out front.

This interior photo, shows the tables, stools and counter that can accommodate more than 60 persons at Bury’s Restaurant in New Cumberland.

Here are a few quotes from the Harrisburg Telegraph: “Congratulations to Mr. Gerald Bury on the opening of Bury’s Dining Room in New Cumberland.” “The new Bury’s roadside restaurant in New Cumberland . . . has proven itself in the four other Bury establishments in York and vicinity during the last several years. All food, including the famous Bury hamburgers, are the result of careful attention to detail.”

I’m still in search of details about that other Bury’s north of Harrisburg. If any of my readers have memories of Bury’s Restaurants outside York County; sent them my way.

Five years ago, I wrote extensively about the numerous Bury enterprises along the Lincoln Highway, west of Playland. I used the following photo, from the Archives of the Springettsbury Township Historic Preservation Committee, in that post:

This is a view while standing in front of Playland and looking west along the south side of the Lincoln Highway, i.e. East Market Street in Springettsbury Township. This September 26, 1965 photo shows, per the York County History Center Directories, that in 1965, the 2720 East Market Street location (at the left) was the business address for Bury Amusements & Rides. The 2710 location housed Bury’s Famous Hamburgers, and directly across Market Street, out of camera view, at the 2709 location was Bury Bros. Soft Ice Cream.

In the distance is Nello Tire Company, with the Goodrich Tires sign, at 2700 East Market Street; where soon a regional tire chain, Mavis Tire, will open a store. In 1965, Northern Way, between Bury’s Restaurant and Nello Tire, had not yet been constructed. Bury’s Restaurant was torn down in 1969 to allow construction of Northern Way; needed to alleviate traffic from the newly constructed York Mall.

The following photo, via Pinterest, is a busy night view of the same Bury buildings west of Playland; i.e. the same viewpoint as the previous photo. This photo was taken before 1959, since from 1959 and onward, Bury’s Ice Cream had moved to 2709 East Market Street, i.e. on the north side of Market, directly across the street from Bury’s Hamburgers.

Back to the question that originated this post; between Bury’s Restaurant and neighboring Playland which opened first along the Lincoln Highway in Springettsbury Township?

David Sternbergh began thinking about the first piece in a Playland Complex during 1939; the same year his oldest son Don set up the York Diner in downtown York. Then 46-years-old, David attended the 1939-40 New York World’s Fair in Flushing Meadows, New York. He discovered most of the structures would be sold following the closure of the fair and put in a bid for a building he thought would house a nice roller skating rink.

After the fair closed October 31, 1940, David was successful bidder and had the building’s large wooden trusses and other useful materials shipped to York. There was an early setback in 1941, when the partly built structure collapsed in a windstorm. Most materials could be salvaged and construction continued, allowing the opening of the roller skating rink in November of 1941.

Along the Lincoln Highway East, Bury’s Restaurant opened on February 8, 1939; therefore it was in operation nearly three years prior to the opening of Playland. Gerald Bury is on the deed purchasing the land to build the complex of Bury buildings adjacent to the Lincoln Highway entrance for Haines Park, which staged weekly horse races from 1928 through 1953.

Details about Bury’s Restaurant, at this location, appear in The Gazette and Daily issue of February 7, 1939; with the headline: “GERALD BURY TO OPEN THIRD LUNCH ROOM.” Quoting the entire article: “Gerald Bury will open the third of a chain of lunch rooms tomorrow on the Lincoln Highway East, at the entrance to the Haines Park race track. Twenty-four hour service will be given. The new establishment has been under construction since the first of the year.”

Of the three Bury Brothers operating Bury’s Restaurants, Gerald Bury [1904-1985] is the youngest. Gerald is responsible for the growth of the chain of restaurants and for the various other Bury ventures; primarily based in the area next to Playland. The oldest brother is Joe Bury [1899-1959], who originated the secret recipe for the hamburgers at his original restaurant on East King Street near George Street. The middle brother Arthur Bury [1903-1974] operated a Bury’s Restaurant on West Market Street, near the Vigilant Firehouse.

Bury’s in Springettsbury Township was not just Hamburgers
75 Years Ago, Joe Bury sells Four and a Half TONS of Hamburgers at the York Fair
Ask Joan some history questions
Assorted notes on Bury’s and Playland
Reader reveals Bury’s secret recipe