Burnt Cabin One-Room Schoolhouse sat on the west side of Vinegar Ferry Road [now River Drive], just north of where the headwaters of main branch of Wildcat Run cross that road in Hellam Township.

Katina Snyder submitted three undated photos of Burnt Cabin. At one time, the photos belonged to Anna Shields, a long time teacher in the one-room schools of Hellam Township.

The following photo looks at the south side of the Burnt Cabin One-Room Schoolhouse with Vinegar Ferry Road passing on the right side, down to the Susquehanna River. The flying American flag has obviously been added to both of the photos; pasted onto the flagpoles. However in the first photo, sitting up against the front porch, there is also a flag that is clearly part of the original photo; was it being mounted on a board, for display in the schoolhouse?

Through the late 1870s, about 40-students filled the Burnt Cabin One-Room Schoolhouse. I suspect many were children of a large workforce in the River Hills, primarily consisting of lumbermen and men involved in charcoaling. For even though Codorus Furnace shut down in 1850, the furnaces between Columbia and Marietta were still producing iron using a process that needed large quantities of charcoal.

Charcoal made an ideal iron furnace fuel, because its’ ash, consisting largely of lime and alkalis, supplied part of the necessary flux for the smelting process. Heating wood in the absence of air makes charcoal. It is a long involved process to char the wood throughout without allowing it to burn to ashes. Because of the large charcoaling operations in the Hellam Hills, I suspect that is why the school got the name Burnt Cabin.

Continue reading to discover when Burnt Cabin Schoolhouse burnt down.

I discovered the following 1878 article in the newspaper microfilms of the York County Heritage Trust. The article reported, “the school house in Hellam Township known as Burnt Cabin Schoolhouse was destroyed by fire.” It noted that the walls are of stone, however I suspect they are referring to the foundation walls, upon which the schoolhouse was undoubtedly rebuilt; i.e. the one shown in the photos. The article continues, “The teacher of the school is Franklin Lehman, and his books, with those of about 40 pupils were lost.” 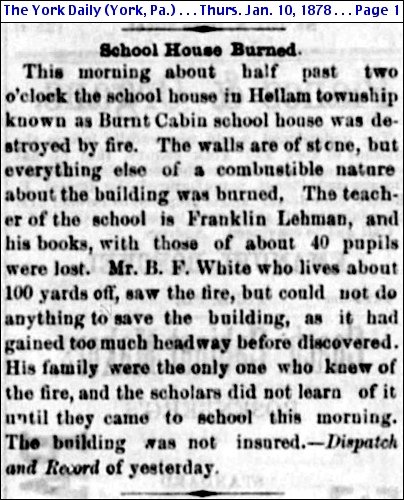 Katina Snyder told me that Anna Shields maiden name was Lehman. I wondered if there was a direct connection with Franklin Lehman; thinking maybe she was his daughter. A little family history research showed that Anna (Lehman) Shields was the daughter of Ephriam and Ellen (Druck) Lehman. Franklin Lehman was the son of George and Susan (Druck) Lehman. Therefore additional research did not turn up a direct connection, however they are still likely closely related; be it through Lehman or Druck families. 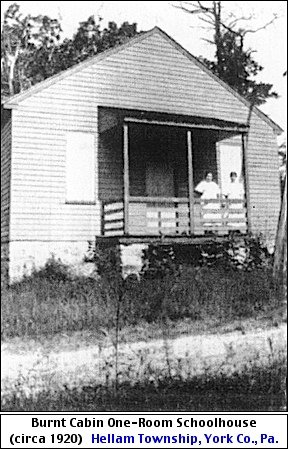 Franklin Lehman was listed as a 24-year old School Master in the 1880 United States Census; therefore he was 22-years old when the 1878 fire occurred. Franklin later became a farmer and died in 1943. Anna Lehman was born in 1884 and was a rural schoolteacher most of her life; she married Chester Shields in 1925. Anna died in 1946. I wonder if Anna got Franklin’s collection of school teaching memorabilia, including these photos, when he died in 1943? Or maybe they were in Anna’s collection from the start.

This third photo of Burnt Cabin One-Room Schoolhouse appears to be later than the first two photos; which is the reason I’ve tentatively marked it ‘circa 1920.’ It is known that Burnt Cabin ceased being a schoolhouse by 1923; maybe the schoolhouse is permanently shuttered in this photo, although it could just be shuttered during a summer break, with increased vegetation growing around it during the summer.

Conveyors are notable in the Farquhar story