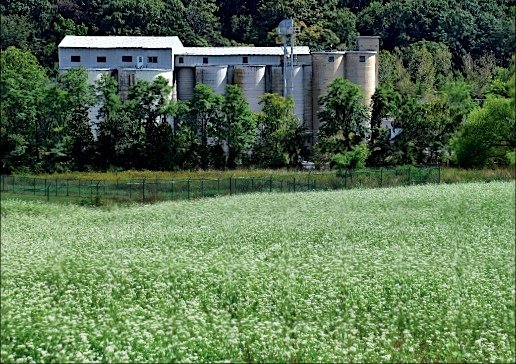 Mike Spyker recognized a buckwheat field growing along Blackbridge Road between the York Mill of Ardent Mills and the York County Solid Waste Incinerator. Like sorghum planted in this field last year, buckwheat is an unusual crop in the Eastern United States. Nevertheless, buckwheat flour and buckwheat honey were staples of my grandparents.

An article in the June 18, 1977 issue of the York Daily Record describes a move to develop more interest in growing buckwheat as a secondary crop. That year a Hughesville, Pennsylvania, farmer, Ben Fought, served as the president of the Buckwheat Institute of America. In an interview, Ben Fought, provided a few reasons why his family has been growing buckwheat since 1909.

“Buckwheat matures in only 70 to 90 days. A good yield is 30 bushels to the acre, which is much less than other cereal grain crops. But a crop of buckwheat can produce income in fields that might otherwise produce nothing in a particular year. Buckwheat seed is inexpensive, it doesn’t get planted until July and it doesn’t take any fertilizer. In fact, it hates good ground.”

Ben Fought noted; “When buckwheat was commonly grown, particularly in the Northeast, the crop was one of the beekeeper’s principle sources of nectar. Now it is such an uncommon commodity that the strong flavored buckwheat honey is more expensive than just about any other type.”

In the early 1900s, instances of stolen buckwheat honey often appeared in newspapers; such as an article in The Gazette of October 12, 1905. The theft of Buckwheat Honey was reported as an item of Chanceford Township news: “A thief walked off with a swarm of bees, in a hive, the property of Jeremiah Hake. Mr. Hake, to be good to his bees, a month ago moved them, hive and all, to his buckwheat patch, so that they would fill the hive with buckwheat honey. They did so and the hive was filled to overflowing. On Monday night the bees and hive walked off. Mr. Hake is looking for a larder filled with buckwheat honey.”

This photo shows a combine for harvesting buckwheat during second week of October. Ben Fought pointed out; “Buckwheat is good eating. Mixed with wheat flour it adds a robust flavor to bread. Buckwheat pancakes have long been a breakfast staple. Butchers who make scrapple use buckwheat flour by the hundred-pound bag. It finds its way into sausage, too.”

“Nutritionally, buckwheat outshines the common cereal grains. Protein content ranges from 11 to 15 percent, much better than corn. And in protein actually absorbed by the body, it outshines rye, whole wheat and even soybean flour.”

Even though buckwheat has “wheat” in its name, it’s nothing like wheat. Buckwheat “grains” are more correctly termed seeds. They have a dark outer hull and inner groat that is triangular in shape. The hull is removed for processing and the remaining groat is roasted and often ground into flour.

My grandmother Barshinger used a lot of buckwheat flour in her cooking and buckwheat honey was a staple. Buckwheat honey also doubled as the families’ cough medicine. Maybe the claimed health benefits are true, since both Barshinger grandparents lived very long lives.