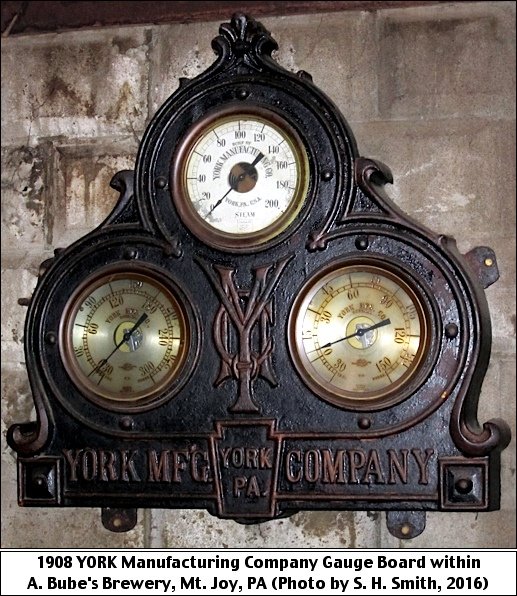 An artifact of Bube’s Brewery’s 1908 YORK Ice Machine still adorns the walls of that Lancaster County establishment in Mount Joy. That YORK Manufacturing Company machine was an addition to a YORK Ice Machine, which Alois Bube previously purchased in 1893.

The 1893 YORK Ice Machine was one of the few Ice Machines produced at YORK’s Penn Street factory between 1885 and 1895; which was before the company moved to a much bigger facility along Roosevelt Avenue in 1896. The North Penn Street factory of the YORK Manufacturing Company was located in the footprint of the present Roosevelt Tavern parking lot. The company evolved from Ice Machine production to Air Conditioning in the 1930s, becoming YORK Corporation; now part of Johnson Controls.

The photo focuses on the refrigeration side of the 1908 YORK Manufacturing Company Gauge Board. The 8-inch diameter pressure gauges provided guidance for an operator to manually control operating conditions. Ammonia was the refrigerant utilized in the majority of YORK’s early Ice Machines. The 300-psi high-side pressure ammonia gauge is on the left and the 150-psi low-side pressure ammonia gauge is on the right.

Neil Strebig’s recent York Daily Record article on Bube’s Brewery in Mount Joy, Lancaster County prompted me to pull my research file on early YORK Manufacturing Company history. In 2013, I used only a small part of that research to prepare a presentation on the first sixty years of York Corporation, and have been adding to that research ever since. In 2016, I started to track down where some of the earliest Ice Machines were shipped. Bube’s Brewery was the first place that I found an artifact from those earliest Ice Machines.

The full gauge board includes a 200-psi steam pressure gauge at the top, since the earliest Ice Machines were powered by steam engines. After entering Bube’s Brewery, head straight back to the room with the barrel lift; the 1908 gauge board hangs on the wall in that area. The story of why it is a 1908 gauge board appears later in the post.

Page 42 of the January 1893 issue of the trade journal, “Ice and Refrigeration,” reported: “Bube’s Brewery, Mount Joy, Pa., will be refrigerated by a 15-ton YORK machine just purchased of the YORK Mfg. Co., York, Pa.” Then on page 193 of the March 1893 issue of “Ice and Refrigeration,” it was reported: “Mount Joy, Pennsylvania—A. Bube, brewer, is about completing a large ice factory, which is located in an annex to his brewery. It is his intention to make ice not only for use in the brewery, but for sale.” The 1908 purchase of a YORK 40-ton compression side, increased the capacity of the YORK ice plant to 55-tons. This ice plant operated until operation was suspended in 1917.

A July 1902 Sanborn Fire Insurance Map of Bube’s Brewery shows where the 1893 YORK Ice Machine was located. In terms of today’s establishment, after entering Bube’s Brewery, make an immediate right into The Bottling Works Restaurant and Tavern; that is the room that housed the Ice Machine.

Sanborn Map symbols for boilers are so noted at their location on the 1902 Plan View of Bube’s Brewery. These boilers burned coal to produce the steam for the steam engines located in the Ice Machine room, which in turn powered the ammonia refrigerant compressor. The smoke from the boilers was expelled via a 60-foot tall chimney. The present reduced height chimney is at that location.

The refrigerant cooling coils of the ice making system ran through brine tanks within the adjoining Freezing Room, where water in large cans was froze into ice blocks. Those ice blocks were transported through the Cooler Room and stored in the Ice House. The upper story windows in the Ice House were most likely added after the ice making operation shut down.

A Closer Look at the Gauges

The ice plant operator knew when he had sufficient coal burning in the boilers for the steam engine to adequately power the refrigerant compressor, by observing the steam pressure via the Steam Gauge. The 200-psi gauge was manufactured by the Standard Gauge Manufacturing Company of Syracuse, NY., and custom imprinted for the YORK Manufacturing Company.

The ice plant operator observes the 300-psi high-side pressure ammonia gauge to show when he has sufficient cooling water flowing through a water cooled refrigerant condenser; i.e. where the high pressure gaseous ammonia is condensed into high pressure liquid ammonia.

The ice plant operator observes the 150-psi low-side pressure ammonia gauge to show when he has a sufficient flow of liquid ammonia being expanded through an expansion valve. That manually operated valve regulates the temperature of the cooling coils, which chill the brine; allowing water to freeze in the ice cans.

A close-up of the 150-psi low-side pressure ammonia gauge reveals this Ammonia Gauge design received a U. S. Patent March 24, 1903. That is the first clue; that the Gauge Board, presently on the wall at Bube’s Brewery, was supplied with the YORK 40-ton compression side, which was purchased in 1908.

The early catalogs of The York Manufacturing Company were searched at the York County History Center. The earliest appearance of a Metal Gauge Board, of the type at Bube’s Brewery, is in a 1906 Catalog, where the cost of the gauge board was $16, less gauges:

So, next time you’re in Bube’s Brewery, check out this neat, over one-hundred-year old, piece of York County history in Mount Joy, Lancaster County:

Founding of the York Manufacturing Company in 1874