Brodbecks amazing Now and Then photos 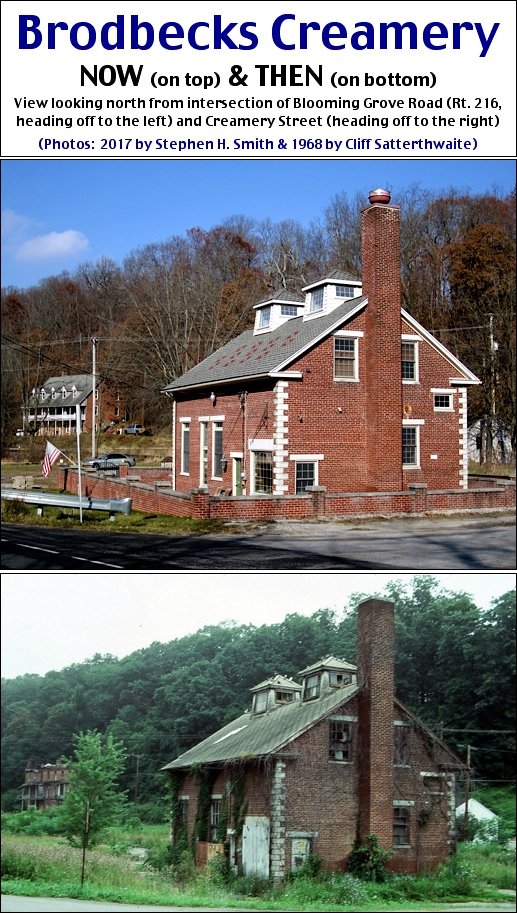 I’ve helped Cliff Satterthwaite identify precise locations, and/or status of structures, related to selected works of art he created in York County; when he lived here from the mid-1950s until the early 1980s. This is the story of a search leading me to Brodbecks in Codorus Township and resulted in amazing Now and Then photos.

Click on this LINK for a yorkblog.com Full View of the original photos in this post if details are cut off in the cropping of photos, or if they have been removed from the ydr.com site.

In November, Cliff sent me his 1968 photo of a neat old building that he used as a subject for one of his recent 2.5-incher paintings. He remembered it was in the southern part of the county and railroad tracks were located immediately behind the building, so he thought it might have been taken in either New Freedom or Railroad.

I’ve walked all sections of the Rail Trail between York and Hunt Valley, Maryland, so I ruled out New Freedom and Railroad. I suspected the setting might be along the other north-south railroad in York County, located six miles to the west, the Western Maryland Railroad.

I shared Cliff’s photo with Ron Dise; who pointed me in the direction of Brodbecks. I matched the viewpoint of the Then (1968) photo to take my Now (2017) photo. The photo was taken at the intersection of Blooming Grove Road (Rt. 216, heading off to the left) and Creamery Street (heading off to the right).

Cliff Satterthwaite was amazed at the transformation, at not only the structure in the foreground but also the building to the left side in the background. He remembered that building was already partially collapsed in 1968 and was amazed to see it still standing.

The Western Maryland Railroad built the structure in the foreground during 1926. In addition to a creamery, it served as a Railroad Station and Post Office. The farmers from the surrounding countryside brought their fresh milk to the creamery, to be cooled in large tanks, prior to shipment to Baltimore. Workers in the creamery also steam washed the old milk cans to return with the farmers. Bill and Antonia Adams bought the long vacant creamery in 1997 and are responsible for its transformation; repurposing it as a gift shop.

The building in the background was built in 1890 and is known as “The Brick House” or “S. B. Brodbeck Housing.” S. B. are the initials of Samuel B. Brodbeck, the founder of the village that bears his name and also the 1878 founder of Brodbecks Band. Mr. Brodbeck built the housing in 1890 as an apartment complex for his employees. It was a four-family, three-story apartment building. Steve Webster bought the long vacant building in 1988 and brought it back from the brink of total collapse as an again functioning apartment complex.

Links to a few other Cliff Satterthwaite related posts: