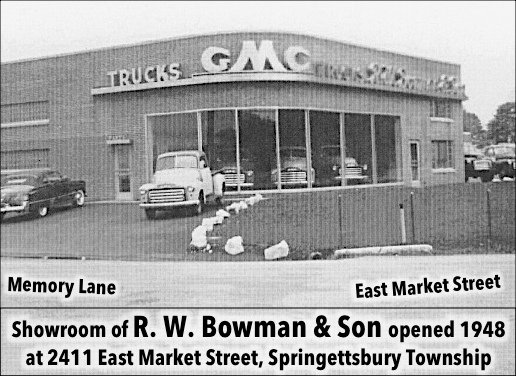 Can you name the five Drive-Thru food businesses located on the lot of the former R. W. Bowman car and truck dealership? That was the question Bob Leiphart posed, upon seeing me taking a few photos last year of the soon be to demolished Gyro-X-Press at 55 Memory Lane; to add to the Archives of the Springettsbury Township Historic Preservation Committee.

R. W. Bowman was granted the York County agency for GMC Trucks on June 22, 1931. Robert W. Bowman, Sr. founded his dealership on the corner of East Philadelphia Street and North Sherman Street in York ; that building is now occupied by Auto Upholstery of York County.

Robert W. Bowman, Jr. joined the business just before the move to the suburbs. In 1948, the R. W. Bowman & Son showroom, featuring the curved corner, opened at the northeast corner of East Market Street and Memory Lane in Springettsbury Township. The full dealership moved to that location in March of 1949, after all service bays were completed to the rear of the showroom.

Until 1959, Memory Lane did not align with Haines Road; as it does today. The following 1949 southward looking aerial photo shows that area shortly after R. W. Bowman established the GMC Truck dealership at that location; seen in the lower left part of the photo. Through the years, R. W. Bowman & Son also added dealerships for American Motors Cars, Ramblers, Mercedes-Benz, Jaguars, Packards, and DKWs, a German car.

The original location of Memory Lane is drawn on the following northward looking 2019 aerial photo of the northeast corner of East Market Street and Memory Lane. The Taco Bell and Gyro-X-Press are located on the lot of the former R. W. Bowman & Son car and truck dealership.

In December 1986, R. W. Bowman & Son merged with Jack Giambalvo. For a few months the dealership remained along East Market Street. However after the Giambalvo dealership on Eden Road was enlarged in 1987, the AMC/Renault and GMC Truck franchises vacated the 2411 East Market Street building. That building sat vacant until it was demolished early in 1993, to build a Taco Bell along Market Street and, at the back end of the property, a Hot n Now was built along Memory Lane. Taco Bell and Hot n Now, were both units of Pepsi; both opened in 1993.

The Hot n Now hamburger establishment featured two drive-up windows, but no inside seating. They were know for their rapid service; possible because they had a very limited menu; essentially returning to the days of the earliest fast food hamburger drive-ins.

Hot n Now had a steady flow of customers the first year, then just OK the second year, however business dropped off drastically in 1995 and closed at year end. The whole Hot n Now chain filed for Bankruptcy in 2004. Bob Leiphart thought there were several short-lived non-food related tenants in the building before the next food Drive-Thru opened there in 2003.

That year Java the Hut opened in the old Not n Now building. It was billed as “York’s 1st Drive Thru Café.” When Bob Leiphart asked if I could name the five Drive-Thru food businesses located on the lot of the former R. W. Bowman car and truck dealership; Java the Hut is the one business I missed. It is likely this was a short-lived business, since I have not been able to discover much about that business except for a few ads, like the following.

From 2005 until 2008, Rudy’s Seafood & Crab House operated from the former Hot n Now building. I remember they had the best crab cake sandwiches; and based upon this ad, noting they were a winner of 2006 Best of York County, many others agreed. In directories, Rudy Smith is listed as the owner.

In 2009, the longest running Drive Thru business at 55 Memory Lane opened in the former Hot n Now building. Christ Kopanis established an all-Greek menu Drive-Thru. The menu included everything from gyros and baklava to chicken souvlaki and rice pudding.

The following are a few of the photos taken November 25, 2019; after Gyro-X-Press closed; but before the demolition fences went up. The whole former R. W. Bowman & Son site, including the Gyro-X-Press and Taco Bell, was leveled and is being redeveloped the second time.

As of February 4, 2020, here is the progress being made on constructing the new, bigger Taco Bell at 2411 East Market Street. At the former Gyro-X-Press location a two-unit retail building will be constructed.

Links to posts containing info on other Auto Dealerships: