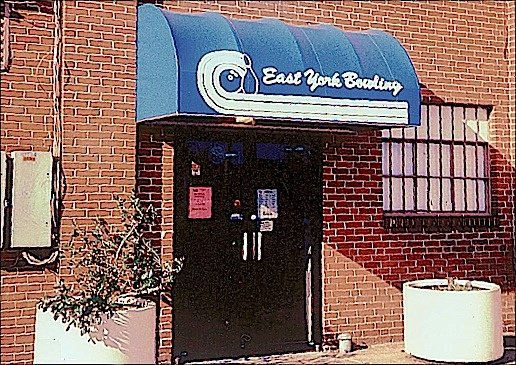 Don Kauffman shared several photos of the East York Bowling Center, once located in the lower level of York County Shopping Center; now known as the York Marketplace. Don suspected an error in a prior YorksPast post; however with living in Arizona, he was not able to view that area of the site to confirm. The shared photos instigated research, which confirmed the error.

Don believes his photos were taken in the late 1980s. The introductory photo shows the ground level entrance to the East York Bowling Center in the lower level of York County Shopping Center, at 2535 East Market Street in Springettsbury Township.

The following photo, taken late in 1992, from the Archives of the Springettsbury Township Historic Preservation Committee, shows the back of east side stores in the York County Shopping Center. Within the photo, the ground level entrances are pointed out to the East York Bowling Center and Feller’s Clothing Store.

In the post East York Bowling Ad has Unique York County Connections the ground level entrance to the East York Bowling Center is incorrectly pointed out as being directly next to Feller’s Clothing Store, when actually it is situated several doors north.

As a THEN and NOW comparison, this is the same area of the back of east side stores in the York Marketplace today.

The East York Bowling Center opened the evening of Wednesday November 30, 1955. It featured 24-lanes and AMF Automatic Pinspotters. After AMF purchased the Naval Ordnance Plant, in Springettsbury Township, bowling equipment production was moved to that plant; where 37,000 pinspotters were produced between 1970 until 1973. Seeing those pinspotters being built made one appreciate the innovation that went into that design.

As an Engineer, working at York Division of Borg-Warner, I bowled on a few company Bowling Leagues. The Leagues were at Suburban Bowlerama on Queen Street Hill, however several of us, from the east end, regularly practiced at the East York Bowling Center. My best bowling success was during a practice session at the East York Bowling Center; when I bowled a 245. The first seven balls rolled were strikes, followed by a spare, another strike, and eight pins in the final frame.

In December of 1992, demolition began on sections of the York County Shopping Center, as the transformation began into the York Marketplace. Three tenants were allowed to stay open during the initial construction: the Red Lobster restaurant, the East York Bowling Center, and the Western Auto store.

In 1994, the owners of the York Marketplace did not renew the Bowling Center lease. The final weekend of bowling was Saturday May 21 and Sunday May 22, 1994.

Everything was sold, including the bowling lanes; which were touted as being ideal for work benches or for flooring material. Per an ad, from the York Daily Record of June 1, 1994: Used bowling lanes, 42” wide, 2” thick. Can get any length, minimum 6-feet, for $8 per foot. Whole lane is 80-feet for $500. Must be removed between 5/31 and 6/8. East York Bowling, 2531 East Market Street, York County Shopping Center.