I purchased this BMY 50th Anniversary 1943-1993 Postcard this weekend.  It shows M4 tanks undergoing testing in a makeshift “rough and ready” fording basin in the early 1950s.  This was the time period when Bowen & McLaughlin-York reconditioned 1,300 M4A3 tanks in their facility at 955 Kings Mill Road in Spring Garden Township; the site of the former McGann Manufacturing plant.

Bowen & McLaughlin-York continued to operate at the 11-acre Kings Mill Road site until 1965.  The plan to construct a BMY plant at Bair Station in West Manchester Township was announced in 1960.  Primary production operations were moved to the Bair Road plant in 1964, while final operations at the Kings Mill Road plant ceased in 1965.

What was the location of makeshift fording basin shown in the postcard?  I assume it was located somewhere near their King Mill Road plant, since Bair Station facility did not occur until 1960s.  If anyone knows the location, please reply with a comment.

On September 21st 1922, the McGann Manufacturing Company purchased an 11-acre property on the northeast corner of Richland Avenue and Kings Mill Road in Spring Garden Township.  McGann produced chemical equipment, dryers, hydrators, sugar machinery, dam & lock gates, condensers, tanks, boilers and various kinds of heavy special machinery.  During WWII, the company did subcontract War Production Work and added prime contract work for the U. S. Army.  Another post describes several weeks of work done by my father, Harold L. Smith, on tanks at McGann prior to being drafted during WWII.  A fire destroyed half of the McGann Plant in 1947.  The McGann Manufacturing Company started to rebuild but ended up filling for Bankruptcy. 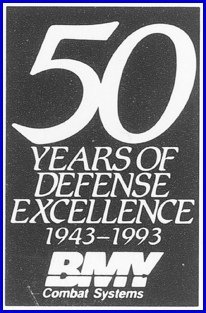 This symbol appears on the back of the postcard.  Although it notes BMY 1943-1993, Bowen & McLaughlin were not located in York County until 1948.  The court-appointed trustee from the McGann Bankruptcy elected to lease the partially rebuilt plant and 11-acre property at northeast corner of Richland Avenue and Kings Mill Road.  This property was leased to Bowen & McLaughlin.

The firm Bowen & McLaughlin goes back to the year 1943 in Phoenix, Arizona when it was engaged by the San Francisco Ordnance District to overhaul and rebuild 3,869 Military Vehicles.  In 1948, Bowen & McLaughlin leased the McGann Plant at 955 Kings Mill Road.  This company had a contract to recondition 1,300 M4A3 tanks.

York was selected because it was close to the source of the tanks, Letterkenny Army Depot, a good shipping infrastructure existed, a host of subcontractors were in the area and York was known as a home of craftsmen who had taken an important role in manufacturing during World War II.  Bowen & McLaughlin-York became a division of Harsco Corporation, then United Defense and is now BAE Systems.